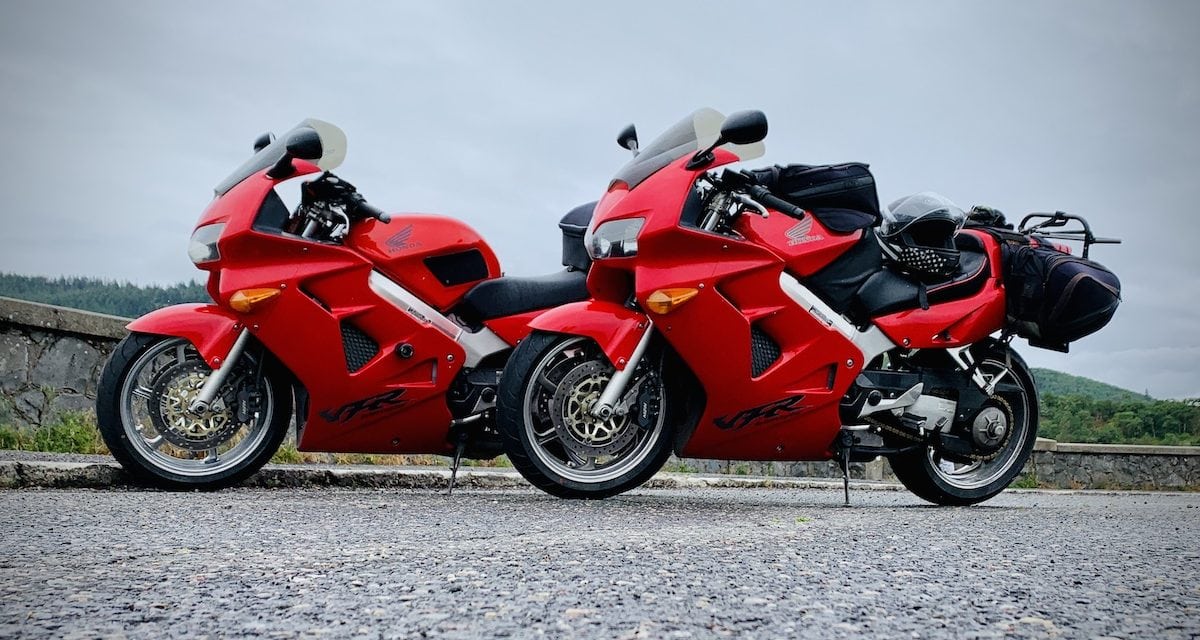 Round 1 of our summer-long sport touring tire comparo

Every bike feels better with new tires.  Replacing old squared off rubber front and rear with new, properly rounded tires helps your bike handle like the designers intended.  Therefore, when riders spoon on new rubber, accolades for the new tire’s handling abound.  But how well do they really handle compared to other brands?

Comparisons for some motorcycle gear is easy. You can try on multiple jackets, several pairs of boots, a variety of helmets, even put one glove on your right hand and a different one on your left to see which one fits/feels/functions best.

This is not as easy with tires.  Rare is the opportunity to compare fresh tires back to back on the same machine to see which brand makes a better handling tire.  To do that you would need to have either a Daytona 200 pit crew constantly changing your tires or even more unlikely, two identical bikes with different sets of new tires.

Fortunately, we at Road Dirt Motorcycle Media have exactly that- not the Daytona 200 pit crew (I wish), but two identical bikes with different brands of new rubber.

Dunlop sent Road Dirt a set of their new RoadSmart IV sport touring tires to compete with Pirelli’s sport touring offering, the Angel GT in a sport touring tire shootout.  Road Dirt guest tester, my riding buddy and hard core tourer Dave Wensveen was roped into this test because he and I have identical 5th generation Honda VFR800s, perfect testing beds for sport touring rubber.  My bike runs with the new set of Dunlop RoadSmart IVs while Dave rides with the Pirelli Angel GT.  For our (mostly) dry handling test, we headed south to the Columbia River Gorge and the Rowena Curves. 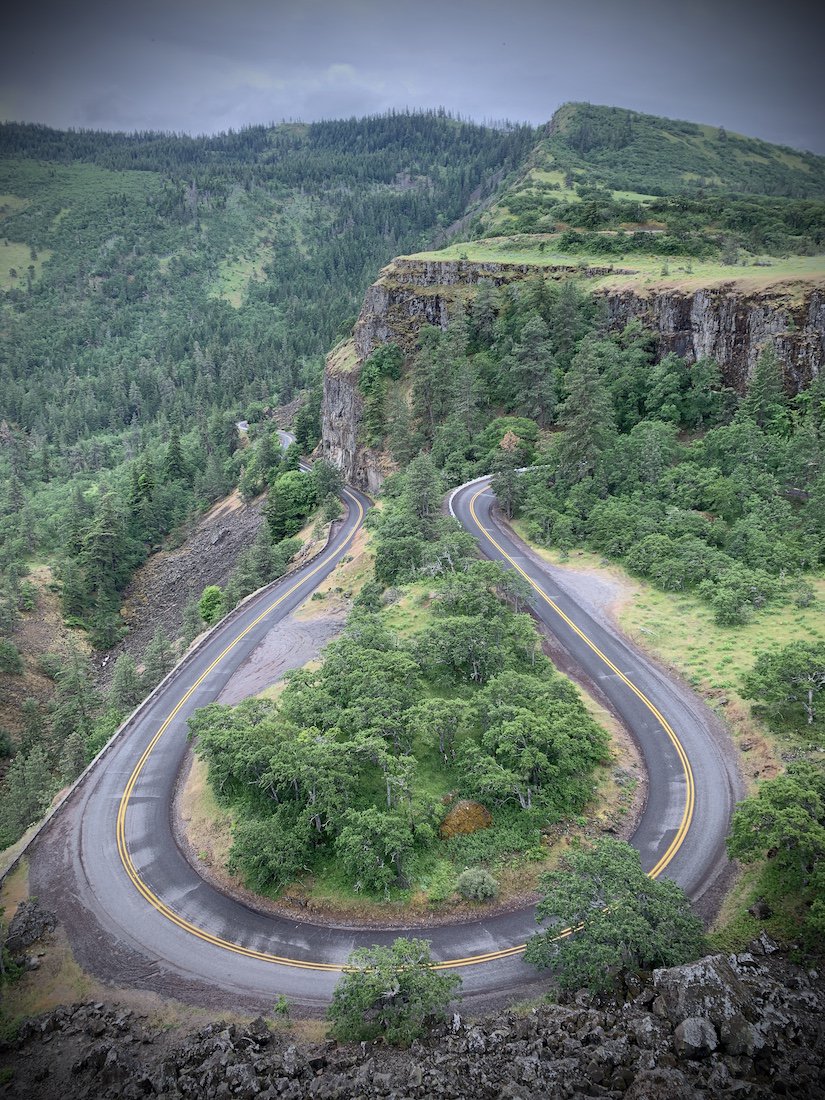 Few roads marry with the land like the Rowena Curves.  They are as stunning to ride as they are beautiful.

Rowena and her curves are iconic, photos of her twists and turns grace Oregon touring literature and the cover of Butler Maps.  Celebrating her 100th birthday, this road was built to complement the land and run around and over it, not through it.  It goes where the land dictates with the pure design intent of making a most beautiful road, a work of art draped over pine covered hills and beneath basalt cliffs.  Snaking around trees and columnar basalt drops the road is short and potent with multiple hairpins and unforgiving rock and mortar guardrails.  Long straights are non-existent.  These are the perfect proving grounds for seeing how a new set of rubber affects handling.  So we went there.  Then it rained.

So Dave and I did what any motorcycle rider would do: we found a café, grabbed coffee and waited for it to clear while we debated our plan, the tires and our bikes.  We both love the almost quarter century old VFR800s.  Fast for their day with a torquey V-four mill, they were also technologically advanced in their time with fuel injection, an LCD display and linked brakes.  The 5th gen VFR is comfortable enough for multiple 300-mile days and the whine from the gear driven cams and V-four growl is as addictive as a fresh hit of caffeine.  Not modern by today’s benchmark, but we know them well.  Dave has put about 25,000 on his VFR since acquiring it.  My odometer is deeper, showing 109k.  Spend that much time on a bike and you understand it. 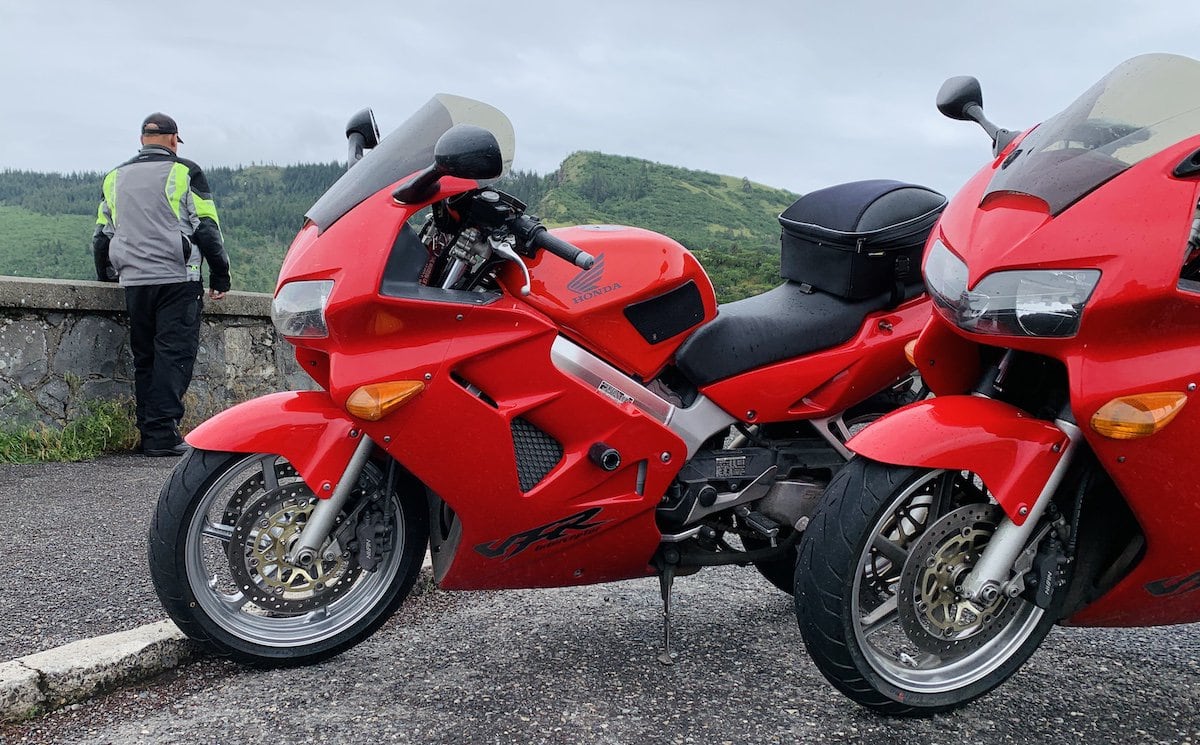 Our test mules rest while Dave looks down from the Rowena overlook.

Blue skies began to poke through, so we fired up our twin VFRs and headed for Rowena, her road designed during an era when Ford’s Model T would barely exceed 25 mph.  Our bikes may have exceeded that speed once.  Or twice.  Ok, maybe a bit more than that.  Quite a bit more.  It is a tire test after all.  And Rowena asks to be ridden hard.  No, she begs for it.

The road is not long, and it took only a few curves on my bike with the Dunlops for the obvious to become clear.  As we crested Rowena and parked the bikes I kept my test notes to myself lest I cloud Dave’s judgement.  On the way back down we swapped bikes, I rode Dave’s VFR with the Pirellis and he took my VFR with the Dunlops.  It took Dave only four curves to reach the same conclusion I had reached earlier.

“The Dunlops are amazing,” he said through our Cardo communicators.  “Way better than the Pirellis.  I used to put Bridgestone S22 hypersport rubber on my VFR and these handle just as good as those.”

Agreed.  The Dunlop RoadSmart IV is simply the best handling tire I have ever put on my VFR.  Turn initiation is ridiculously light without sacrificing mid-corner stability, line changes on high speed sweepers are drama-free and upright stability is not compromised to achieve these goals.  After a hundred thousand miles on my bike on many different sets of tires (most of them, ironically, on the Pirelli Angel GT) the Dunlop RoadSmart IV is now my new favorite tire.

As I put the Pirelli Angel GT shod VFR through its paces I noticed that the Pirelli resisted turn-in just a touch more than the Dunlop RoadSmart IV, taking a bit more effort for turn initiation.  It was just as stable at lean, but the flatter profile on the rear resists turn initiation a bit more than the Dunlops.  It’s not that the Pirellis are bad handling tires, the Dunlops are just that freaking good.  The Angel GTs actually handle quite well and are stable on edge, but when ridden back to back with the RoadSmart IV shoes, the Dunlops shine. 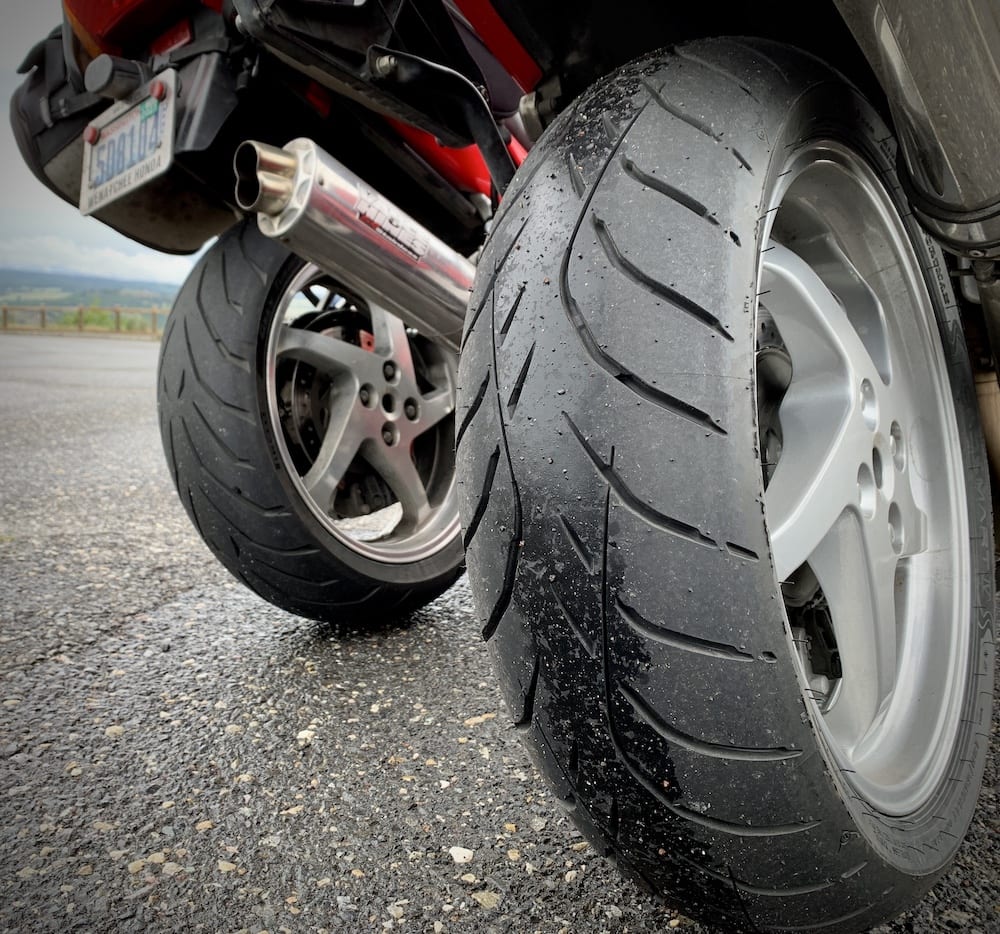 The Pirelli Angel GT (on left) has a flatter profile while the Dunlop RoadSmart IV (on right) handles like hypersport rubber.

“The Dunlop always wants to tip in,” Dave said in his test notes.  “It’s almost like you have to work just a tad bit to keep the RSIV on center and if you adjust the bike a little, it tips in.  If you came from a cruiser to this bike and the Dunlops, you would be fooled into thinking that it was unstable.”

Dave noticed the same traits about the Pirellis that I noticed.

“The Angel GT is flatter on the back,” he noted.  “That can’t help.  It’s just a slower tire.  If I had to pick, I would pick the RoadSmart IV.  Unless they have horrible mileage or wear down funny, I would go with the RSIV.” 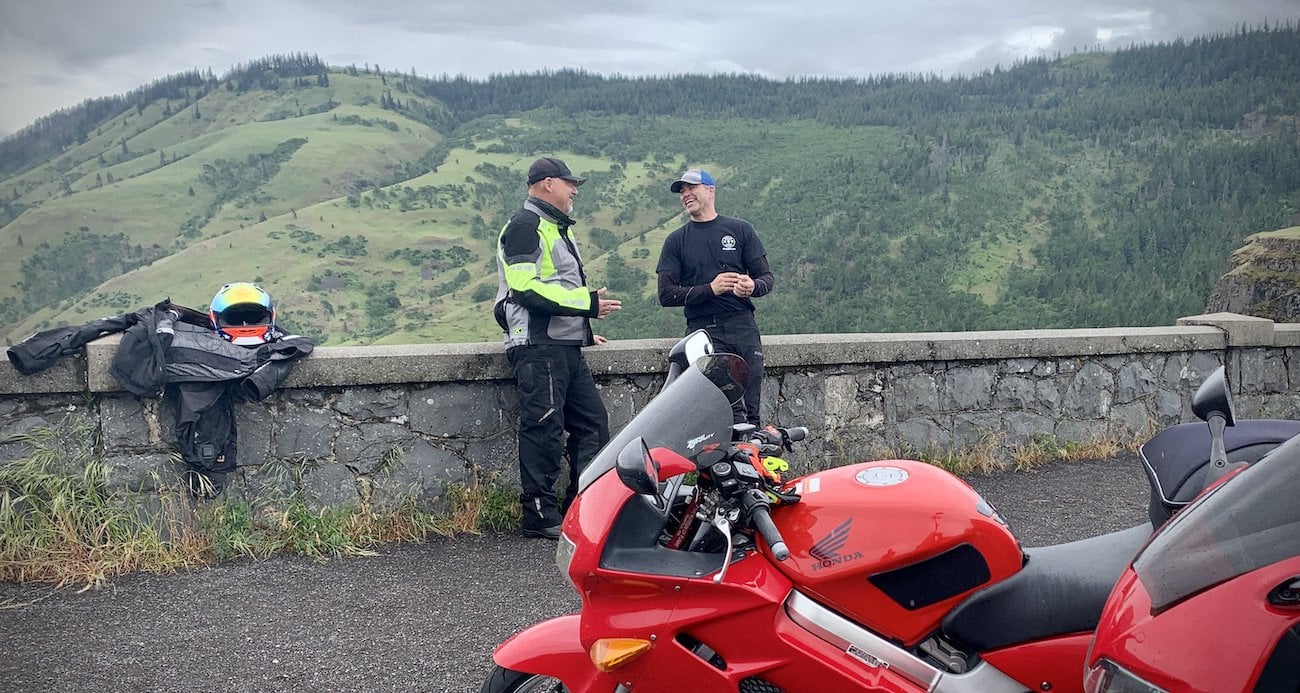 We spent 3 days riding both bikes back to back while comparing notes and came to the same conclusion: We love the Dunlops.

I am going on record here, in front of both of my readers, as saying I really don’t want to do what comes next.  It’s a revolting, horrible, bad idea, and for someone who has ski toured off their motorcycle, done more dirt miles on the VFR than many ADV bike riders and abused the VFR on the track, that is saying something.  I rarely have second thoughts about what I do on the bike, but I am having serious issues about committing to what Dave and I decided to do for the next phase of this tire test.  I am dreading it as I write this, type II fun be damned. 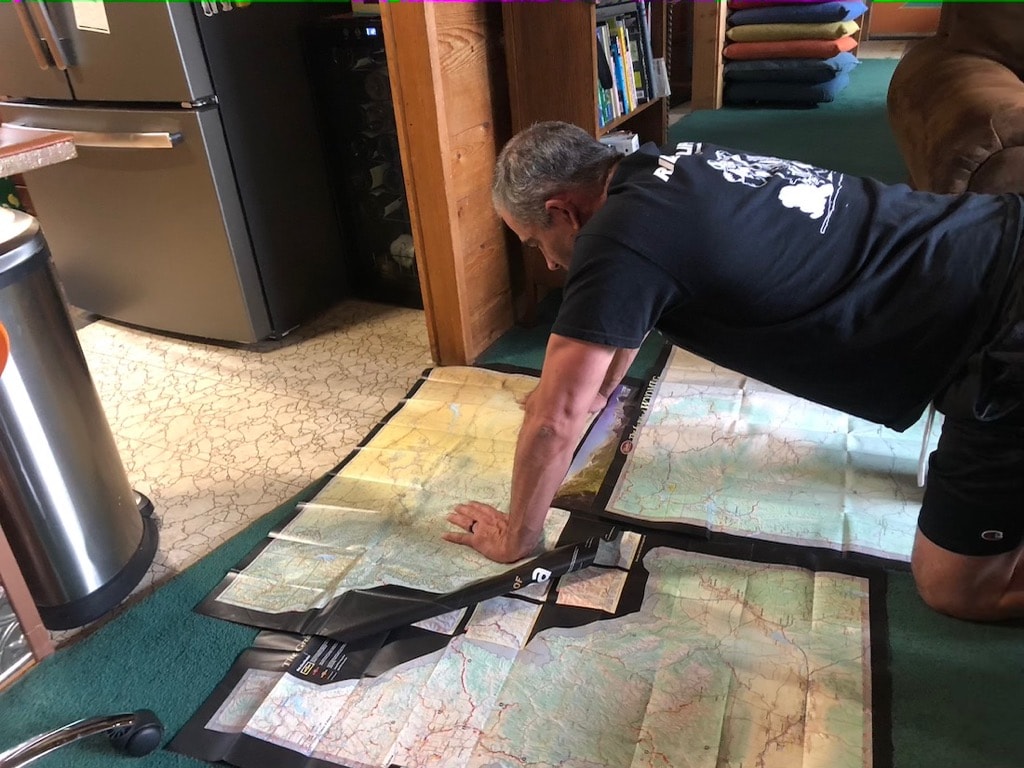 A bad plan being hatched. 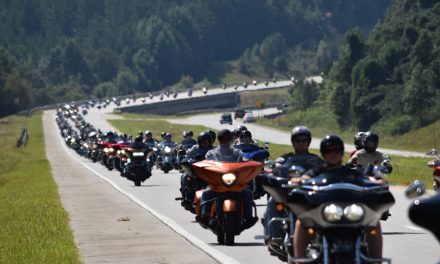 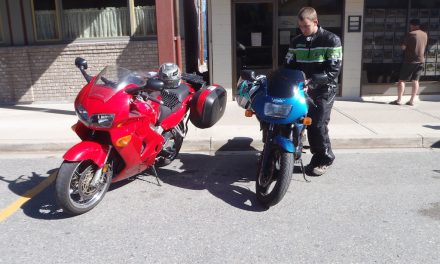 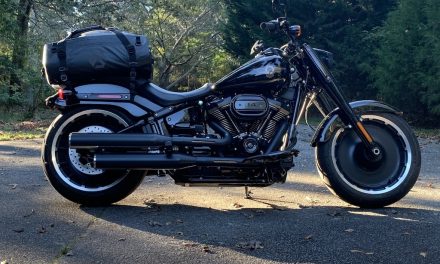 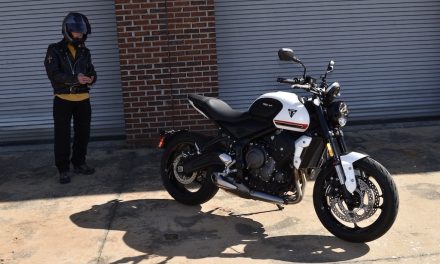