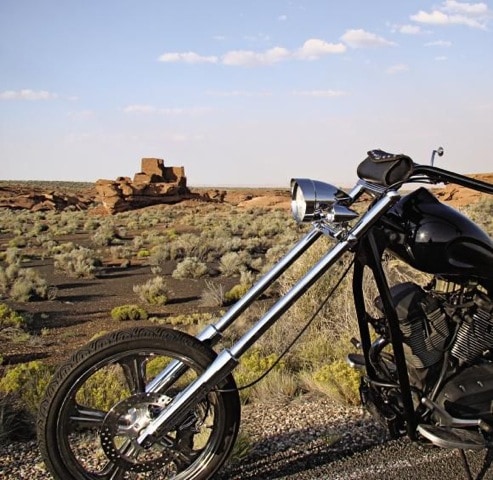 *We are honored and thrilled to feature Joshua Placa, noted motojournalist & editor with Cruising Rider and Motorcycle Cruiser, both magazines I subscribed to in the 90’s-2000s. Joshua has long been among my favorite moto writers. We think you’ll enjoy him as much as we do. Rob

We often wander the world with no real destination except that place in our motoring mind pushed by adrenaline, the sensual beauty of a soft, sweeping curve, and the pure, exultant thrill of discovery. As the miles and years roll by, it’s harder to find that fresh road and soul-stretching horizon. But there is one particular place, little known to man and biker alike.

Wupatki National Monument, just north of Flagstaff, Arizona, haunts its visitors with ancient Indian ruins, dormant but not dead volcanoes, frozen rivers of lava, and booming vistas of the Painted Desert. In one 35-mile loop, riders can see centuries of human and geologic history. Entering from the north end of the park, the landscape shifts from desert scrub to towers of petrified dunes in rusting shades of red sandstone, to green fir and piñon pine forests, to rolling fields of black volcanic cinder. The high desert is dotted by the stone remains of pueblo settlements whose people mysteriously vanished after centuries of habitation. 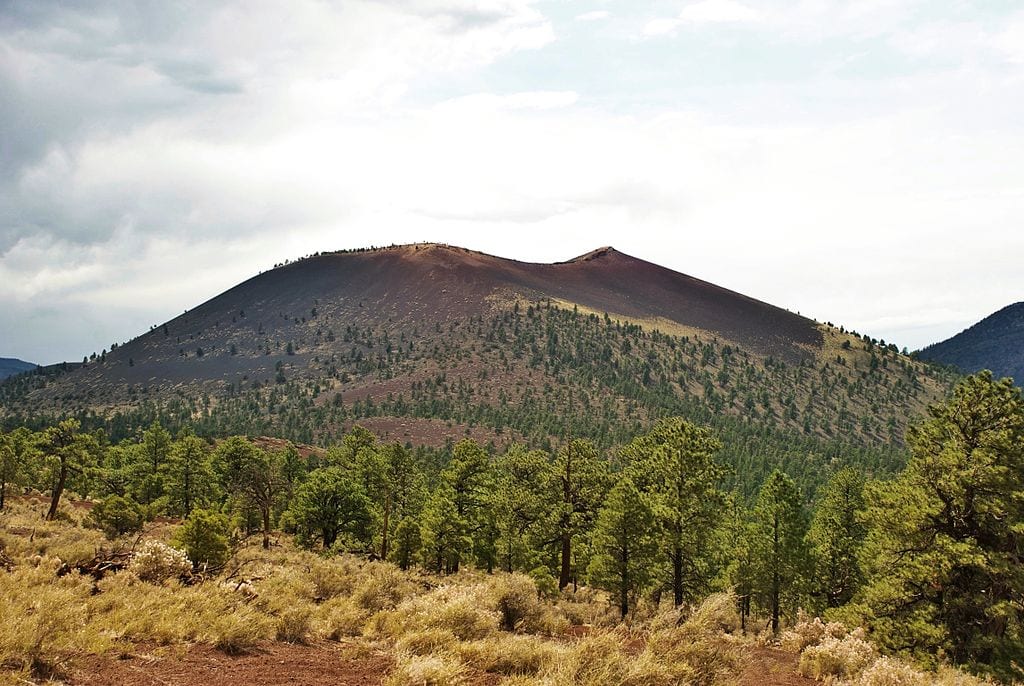 At the south end of the park, scores of cinder cones gather like children to the towering mother volcano, Sunset Crater. The big, dark conical pile of volcanic rubble stands at a foreboding 8,049 feet. Snow often tops its crater in winter. It’s been estimated up to 600 volcanoes remain dormant in the Flagstaff area, the last eruption only a mere 750 years ago—less than a blink in geologic time. The visible ruins are clustered at the north end of the park, but many more are believed buried under the ash, Arizona’s own forgotten Pompeii.

Miles north of the major eruptions, the area’s largest ruin is the multistory, eponymous Wupatki Pueblo (a Hopi Indian word for “tall house”) contains more than 100 rooms. The well-preserved ruin once was home to some 300 people, a teeming metropolis by pueblo standards when most villages were typically no more than a clan of 10 to 20. This was a crossroads, a center where tribal goods from as far away as Mexico and California were traded, evidenced by the seashell materials used in jewelry and decoration, as well as a broad variety of pottery styles.

Evidence of human occupation goes back 11,000 years, but Wupatki Pueblo and surrounding ruins were populated in large numbers for nearly 300 years from about A.D. 1000 to 1300. Then everyone vanished, seemingly all at once and in a hurry. Theories abound, everything from the quackery of New Age alien abduction to a decades-long drought to absorption by other tribes, but anthropologists are still baffled by the sudden exodus.

The Sinagua (Spanish for “without water”), Anasazi (Navajo for “ancient people” or “ancient enemy”), and Cohonina (Hopi for a collection of ancient tribes) peoples inhabited large areas of northern Arizona beginning around A.D. 500 in ruins still seen today, though human occupation is evident dating back to the Ice Age. No pueblos were as large as Wupatki except for Tuzigoot, located in what is now Clarkdale, Arizona, about 100 miles to the south as the crow flies and uncannily similar in size and basic architecture

The Tuzigoot settlement also disappeared at about the same time, approximately A.D. 1250 to 1300. No evidence of mass disease or violence has been found at either historic site. Extended local drought in a fragile arid environment appears to be the likeliest cause, but it doesn’t explain native cultures vanishing, not just in the Southwest but also sweeping through the Midwest. 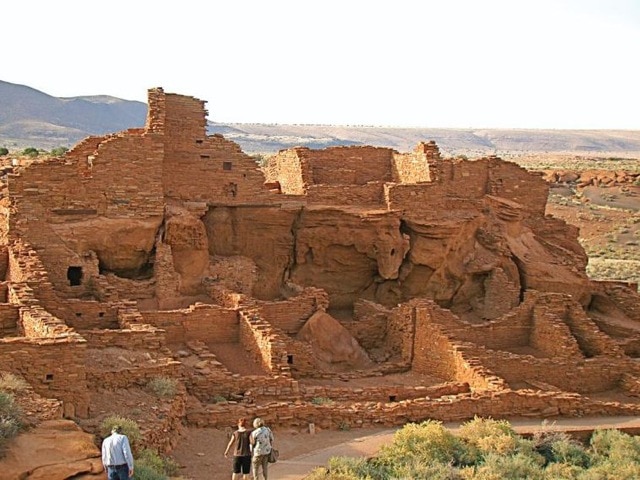 Following the black ribbon that wraps around the desert park, Wupatki Pueblo is introduced by smaller structures, like little villages suburban to a large city. Archeologists have cataloged some 2,700 sites in the national monument, but only four others are open to the public: Lomaki, Wukoki, Citadel and Nalakihu Pueblos, all reached by short walks. The Wupatki Pueblo, however, is the centerpiece.

The pueblo, as with neighboring structures, was built with nearby sandstone, nearly blood red with iron oxide. Walking among its ruins, visiting its two kiva-like structures (one thought to be used as a ball court; the other as an amphitheater for tribal meetings), and the “blowhole,” a fascinating geologic feature, considered by the inhabitants to be where the earth takes its breath, will send your imagination into another epoch. The site’s Visitor Center doubles as a museum.

The villages were almost invariably built on a mesa, hilltop, or even a large boulder, presumably for their defensive position and likely doubling as a signal tower, relaying alerts or messages from one high point to the next. With rainfall harvested from intermittent springs, seasonal washes, and the use of small dams and terraced slopes, corn, beans, and squash were grown to supplement hunting and gathering. 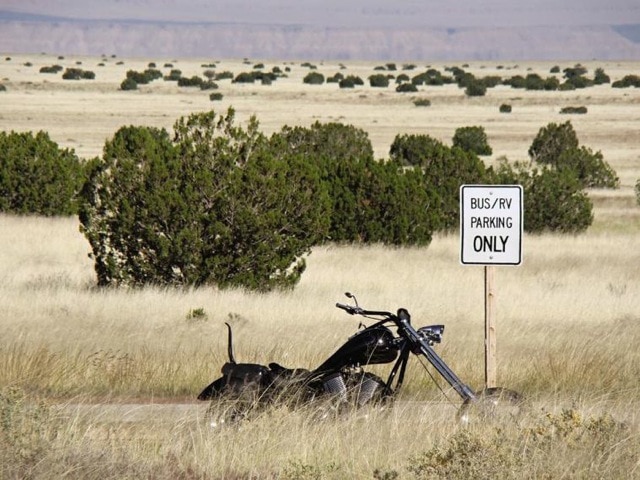 The ride through the park is time-transporting. Photo by Joshua Placa

Around the time some plucky English barons forced King John to put quill to parchment and sign the Magna Carta and Genghis Khan was the scourge of central Asia and China, the people of 12th century Wupatki had built what anthropologists believe was the richest and most influential pueblo in the region, a far-reaching trade center and home to one the largest Southwestern populations of the period.

Their success was in no small way built on the ashes of Sunset Crater volcano, which had erupted only about 100 years before settlements grew to significant size. It must have been spectacular. Volcanologists estimate it destroyed all plant life within a 5-mile radius. A fountain of fire shot 850 feet into the sky and an ash cloud rose 2.5 miles, leaving falling ash to blanket some 64,000 acres. In nearby present-day Flagstaff, where fall temperatures can drop 40 to 50 degrees by sunset, I sometimes hope the volcanoes will wake up just long enough to spill some nice, warm lava on me.

The cinders turned out to be a blessing. Not only do they enrich the soil, but more importantly the cinders retain moisture, making agriculture practical in a parched environment. As Wupatki and neighboring pueblos flourished trade networks expanded, bringing everything from turquoise to copper bells and even exotic birds to the seemingly barren area. Some 2,000 people were estimated to settle the area after the eruption, according to archeologists. 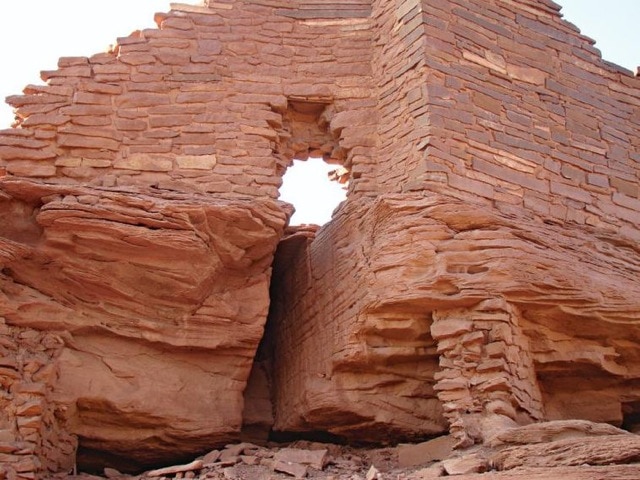 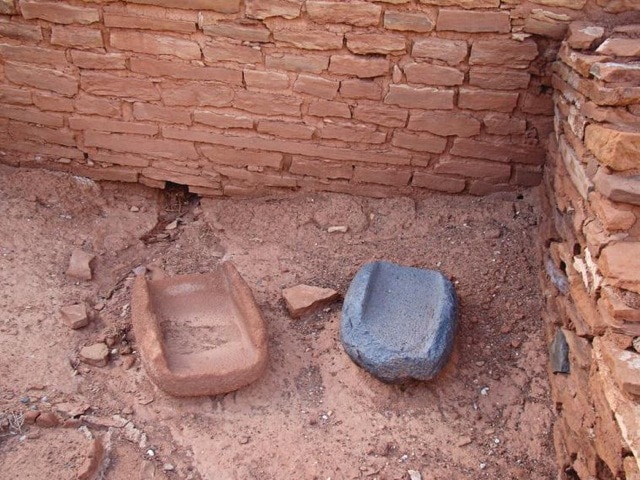 Today, the nearby Hopi tribe believes the Sinagua and Anasazi people who lived here remain as spiritual guardians. The Wupatki Pueblos live on in Hopi oral tradition and passed among neighboring Zuni and Navajo. The Hopi Bear, Sand, Lizard, Rattlesnake, Water, Snow, and Katsina clans return to the area periodically to come face to face with their clan history. In this way Wupatki is not abandoned but a standing remembrance of their history.

No matter your heritage, motorcycling through this place of cultures past feels like a gallop back to primal basics, where human relationships alone determined survival. Pueblo people had virtually no technology beyond stone tools, rudimentary masonry, pottery making, basket weaving and the bow and arrow. The wheel was never invented nor was any written language; there was no metallurgy nor simple, hand-driven machinery, nor even the apparent use of levers, pulleys, or fulcrums. They did not domesticate animals, build pyramids nor colossal, iconic statues, swords, or plowshares; and yet they thrived in a hostile land. 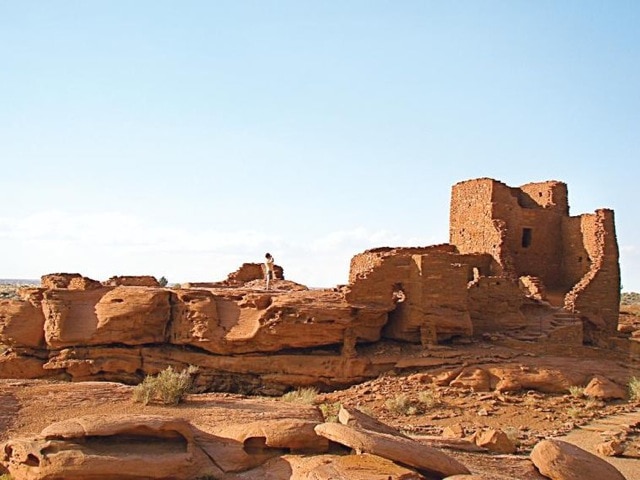 Empty homes for a once thriving civilization, in a barren landscape. Photo by Joshua Placa

Horses, once common in a variety of species, had gone extinct in North America and wouldn’t be seen on the continent until Spanish conquistadors reintroduced them almost 200 years after the Pueblo people vanished. Transportation and the technology Europeans brought to the New World changed everything, allowing large populations to flourish but not without a price.

The ride through these ruins, senses and instincts heightened, takes us into deeper mystery. For all our great civilization and wondrous technology, all the gadgets supposedly designed to keep us linked, communicating, and together, our humanity can be left behind, leaving us disconnected. At Wupatki, we’re reminded how attached we are to each other and the world around us at a fundamental level that traverses time, whether we like it or not. Maybe motorcycling helps us understand life at a more common denominator, in a world where ultimately we cannot survive alone and apart—a ride worth taking anytime. 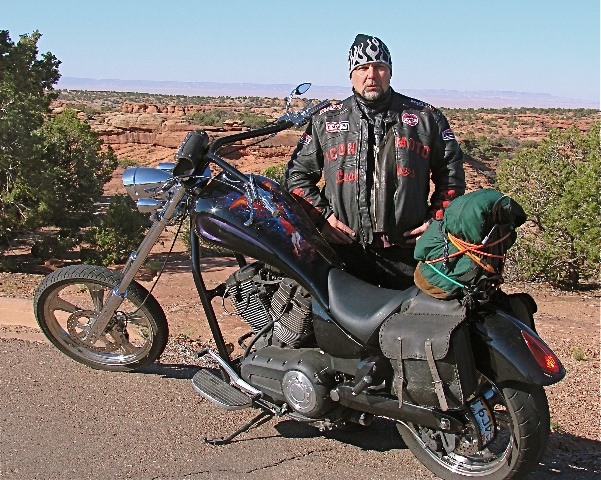 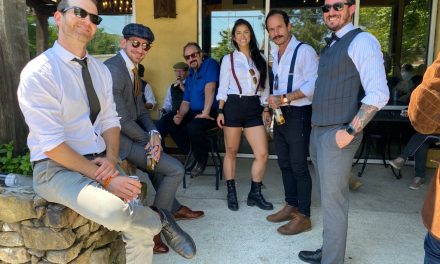 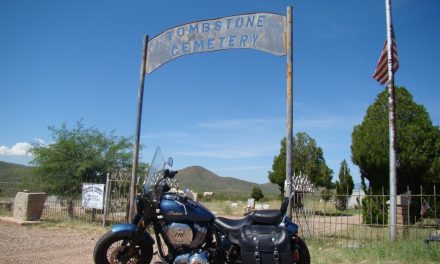 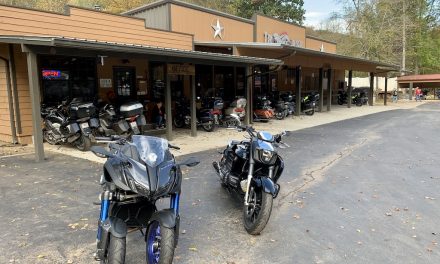 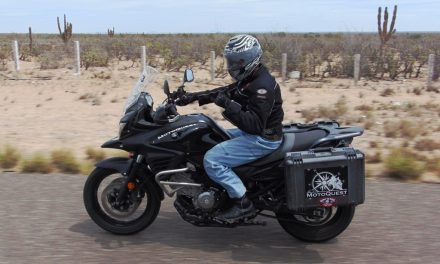