A Brief History of the Cafe Racer 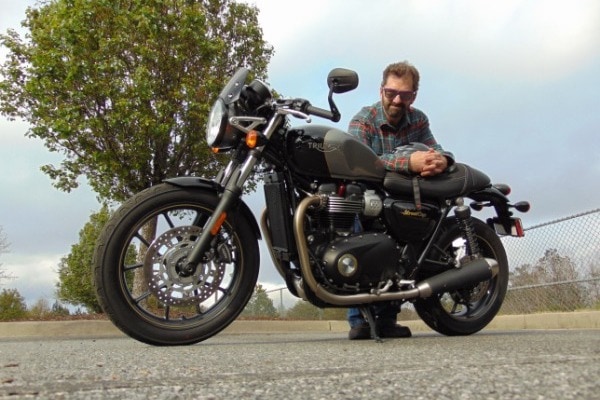 A glimpse into the origins of a popular motorcycle style

The café racer has long been a popular genre in the motorcycling universe, and remains a sought-after look and style among today’s “modern classic” offerings by so many brands. Editor Rob even owns an example of one in the form of his 2017 Triumph Bonneville Street Cup. So we decided to take a short dive into the origins of the café racer, to discern its lasting appeal to motorcyclists the world over.

Post World War II Great Britain was a good period for motorbiking. The UK’s economy was improving, rationing was no longer necessary, and the requirement for labor was at an all-time high. This meant that, for the first time in many years, people had disposable income. While automobile ownership was still not all that common in England yet, public life was on the cusp of a transition, as most family vehicles would be replaced from motorbikes to motorcars. Yet decommissioned military motorcycles were made available for civilian purchase, and companies like Triumph, BSA and Norton, among many others, thrived in the Post-War economic growth, producing fantastic, affordable bikes for markets both foreign and domestic. This also meant that motorcycles became the preserve of young men, many coming to purchase their very own motorbikes for the first time. 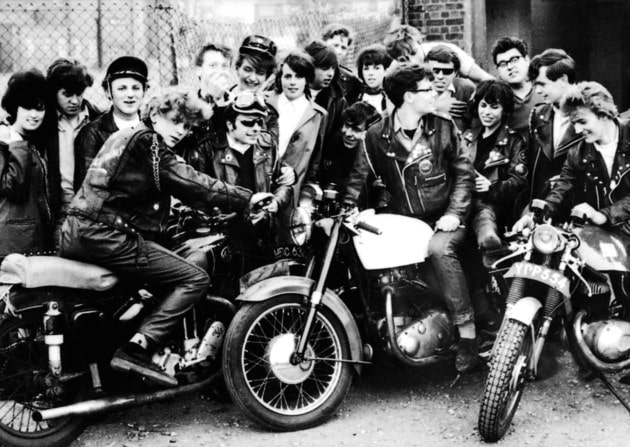 Rockers from the early days of the Cafe Racer culture. Photo by the BBC.

In the 1950s, British pop culture became centered around the new phenomenon known as “Rock n’ Roll”, and the youth that followed this musical and cultural trend inspired one of the most influential movements in motorcycle history. The “Rockers” became a popular youth subculture at the time. These motorcycle riders thought that their music and rebellious nature would be the perfect adversary and antidote to the perceived suppressed culture of “Merry Old England”, and a stark representation of their attitudes were the personalized bikes they used to roar around British streets in search of local bands, jukeboxes and parties at popular cafes. This led to the term “Café Racers” becoming popularized.

While the main ingredients to a classic Café Racer were a symphony between a passion for rock and roll and a need for speed, no motorcycle would be a true rockers’ café racer unless it could do ‘The Ton.’ As dirt track, scrambles, overland road racing and other motorcycle racing events were at the height of popularity, racing legends like Mike Hailwood and Geoff Duke were the idols of many a young man across the British Isles, and the ability to outfit and tune their motorbikes to reach 100 miles an hour became the new craze. The triple digits were a badge of honor, and groups like the “Ton-Up Boys” and others made it a right of passage. 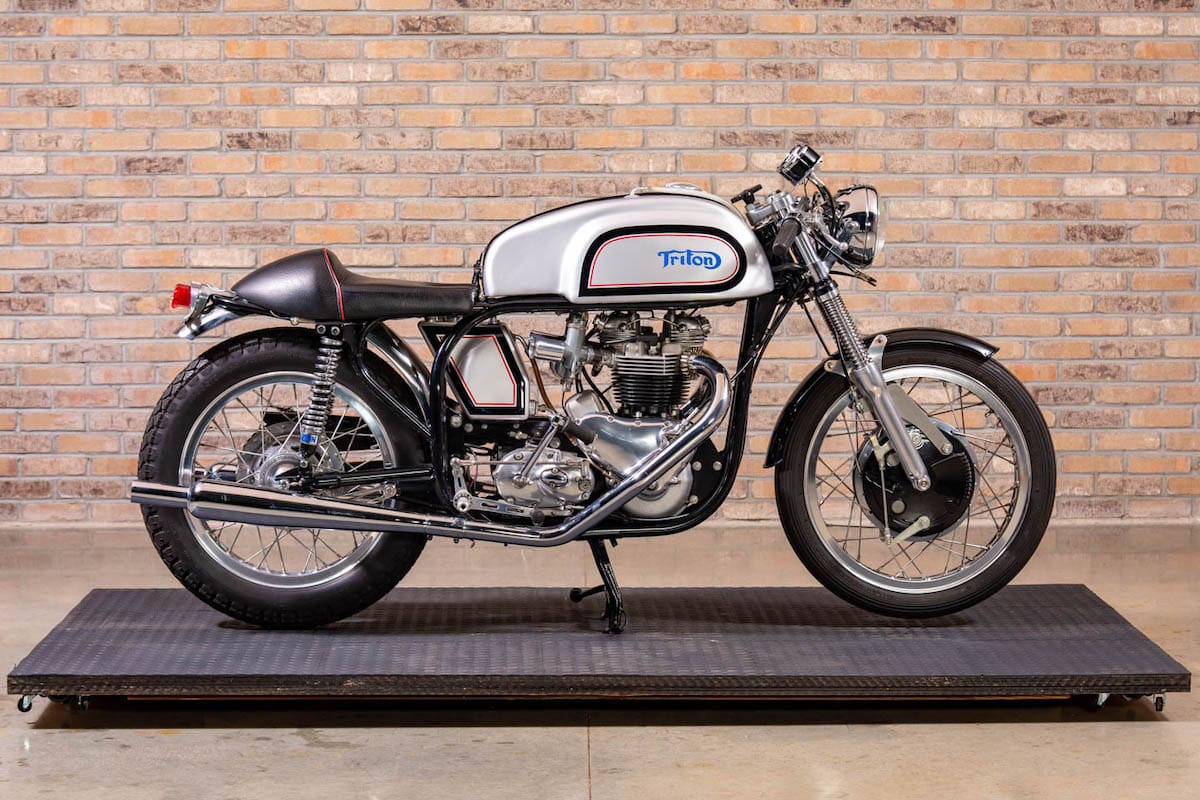 A beautiful example of the “Triton” café racer, from our friends at the Throttlestop Museum in Elkhart Lake, WI.

This craze gave birth to the term ‘Café Racer’ itself, where locals typically perceived the individuals involved as young men that hung around transport café’s, waiting for motorbike riders to show up on tricked-out machines to race down the streets. Ground zero for the café racer craze is widely recognized as the Ace Cafe, an establishment on the North Circular Road in London. Opening its doors in 1938, the Ace Cafe was a truck stop café that soon became the Mecca for motorcyclists across England. Racing among Rockers from Ace to other predetermined points and back became a thrilling, albeit dangerous, pastime. While these illegal races generally didn’t involve cash or pink slips, they carried a lot of weight in terms of respect and bragging rights, and that’s precisely what Rockers wanted.

The configuration of a typical classic café racer was pretty straightforward. Riders would often strip off any parts that weren’t deemed essential on their motorcycles to reduce weight, often such as fenders, windshields, airboxes, rear seats, etc. Owners would then tune their engines to the best of their abilities and add trademark cosmetic fittings like reversed/dropped handlebars, rear-set footpegs and aluminum tanks with knee-cutouts, allowing the rider to tuck in and reduce wind resistance at high speeds. As the trend gained popularity, café racer enthusiasts started to become more experimental, and the idea of doing complete engine swaps caught on quickly. Popular examples of this was the ‘Triton,’ a hybrid consisting of a Triumph Bonneville engine mounted to the frame of a Norton Featherbed frame, and the ‘Norvin’, a Vincent powerplant mated to a Norton frame as well. 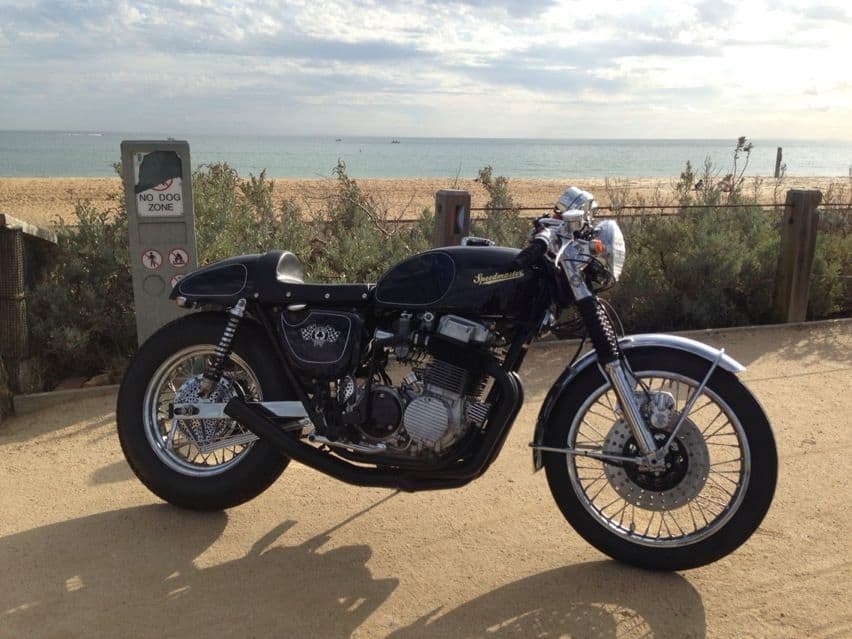 A fine example of a Honda CB750 café, the “SpeedMaster” by Steve “Carpy” Carpenter of Carpy’s Cafe Racers. Photo by Carpy.

By the mid-’70s, Japanese motorcycles had taken over the marketplace, and the style of Grand Prix racing bikes was refreshed. The predominantly British-style café racer now began to use popular Japanese units such as the Honda CB750 and Yamaha SR400 as the base for their conversions. The Café Racer style continued to be so successful that celebrated motorcycle manufacturers like Moto Guzzi, Ducati, and even Harley-Davidson started to develop and produce factory café racers, with German brand BMW eventually joining the café fray as well.

Modern Café Racers often revolve around DIY projects by enthusiasts, and there is now probably a café racer version of nearly any motorcycle model you can think of. Modern motorcycle manufacturers are still contributing to the trend, with brands like Triumph, Kawasaki, Yamaha, and Royal Enfield offering “modern classic” versions of the niche.

*Source material by Throttlestop Museum and Return of the Cafe Racers 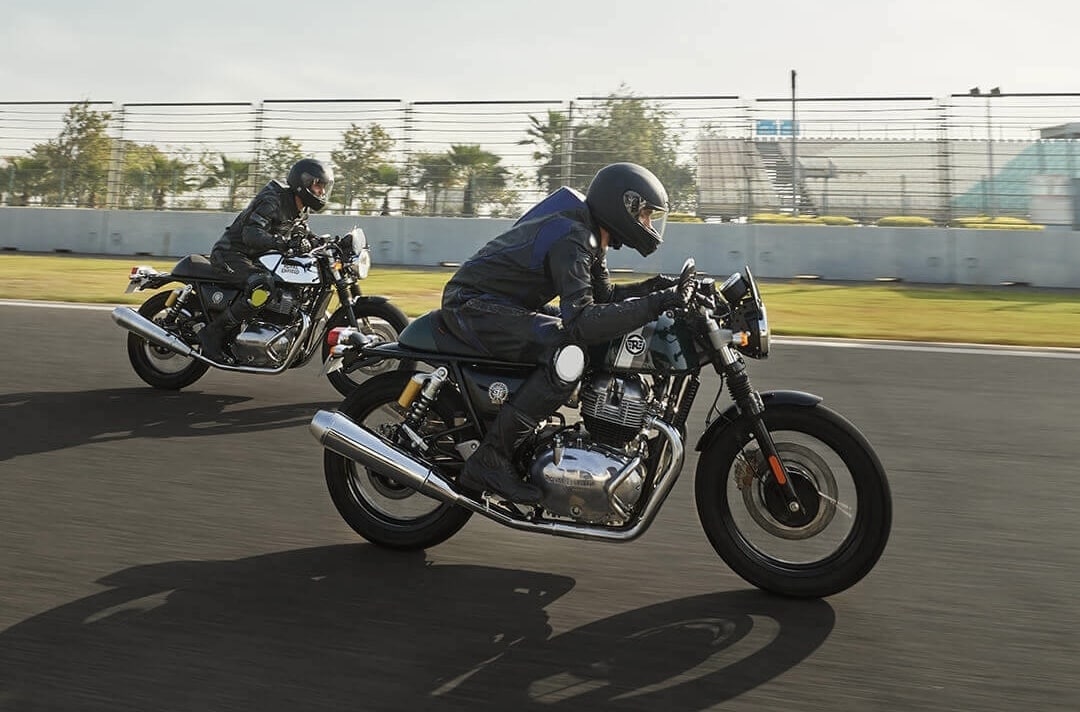 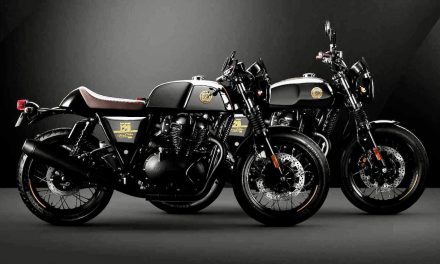 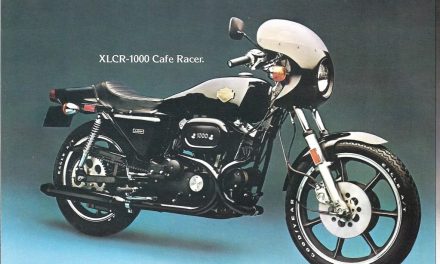 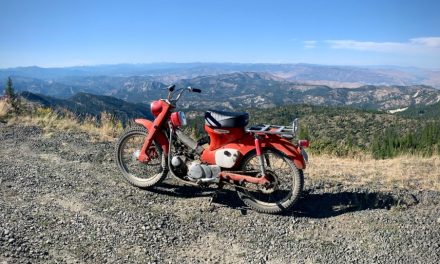 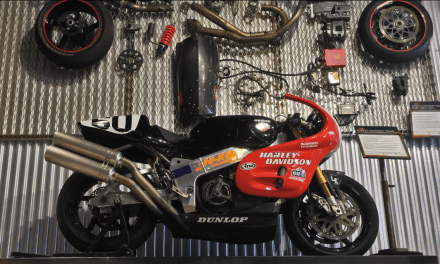