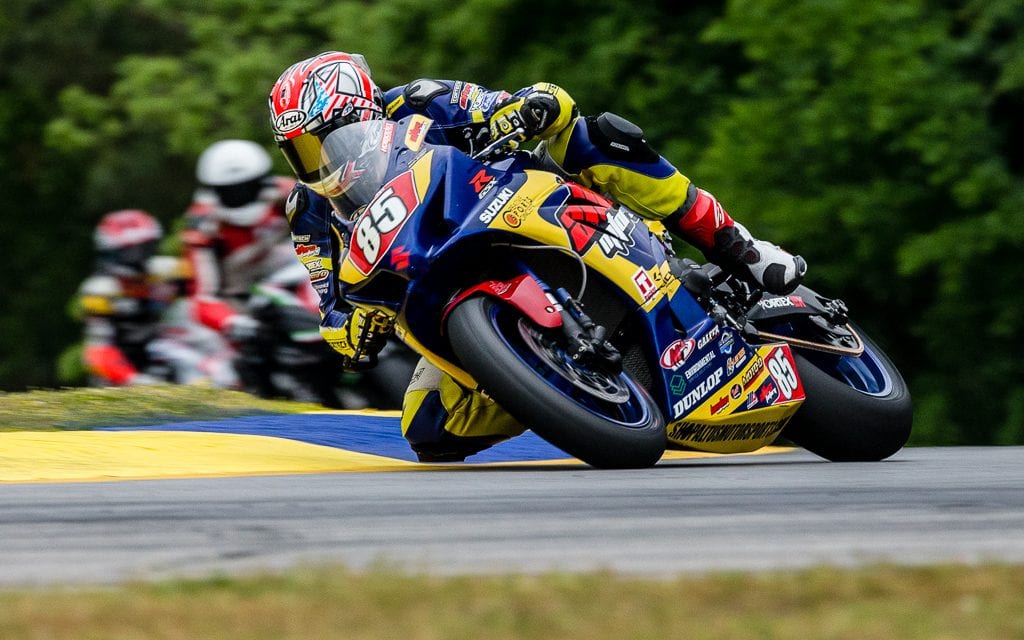 The competition was fierce at Michelin Raceway Road Atlanta.

For some years now, the MotoAmerica motorcycle road racing series has been exciting if somewhat predictable in several classes- Cameron Beaubier dominated Superbike, often in close contest with Toni Elias; Garrett Gerloff and JD Beach, then Richie Escalante and Sean Dylan Kelly, ruled the Supersport class; and in the past three years, we’ve grown accustomed to watching the young Rocco Landers destroy the competition first in Junior Cup, then Twins Cup.

What a difference a year makes.

The only race class with a defending champion in 2021 is Supersport’s Richie Escalante. Cameron Beaubier has moved on to Moto2, Gerloff and Beach have been dicing it in WSBK and American Flat Track respectively for the past few years, and Rocco Landers has vacated the seats of both Junior and Twins Cup.

The race classes are wide open this season. We find this very exciting.

The season kicked off at Michelin Raceway Road Atlanta April 30-May 2, and the races on Saturday did not disappoint. 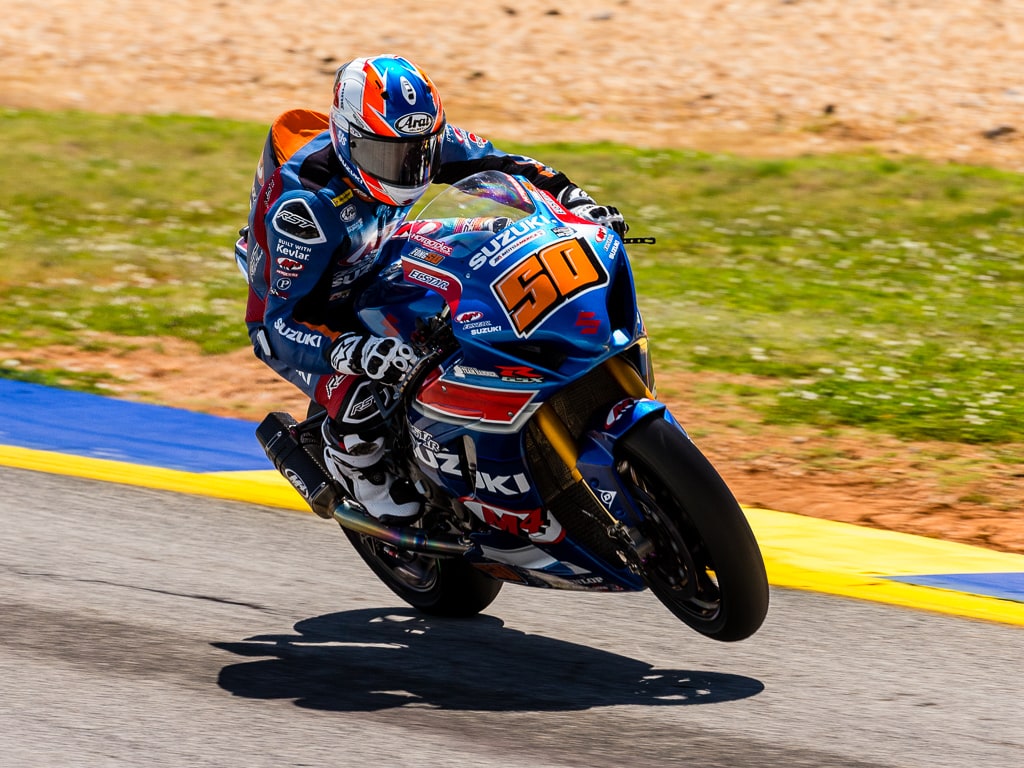 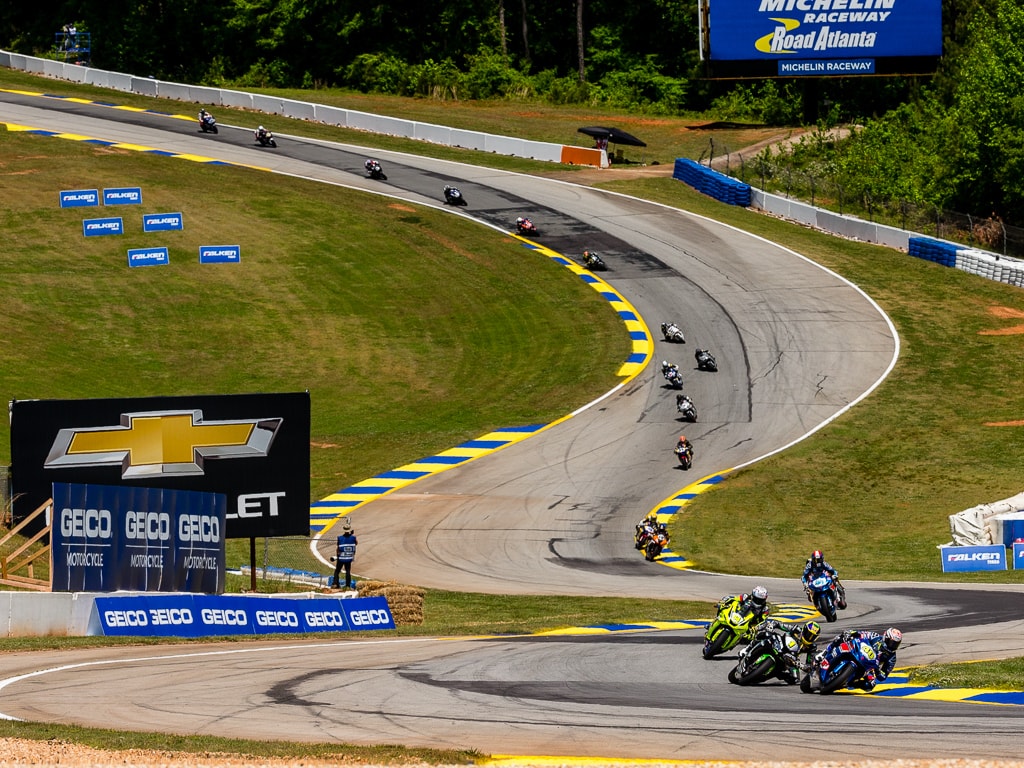 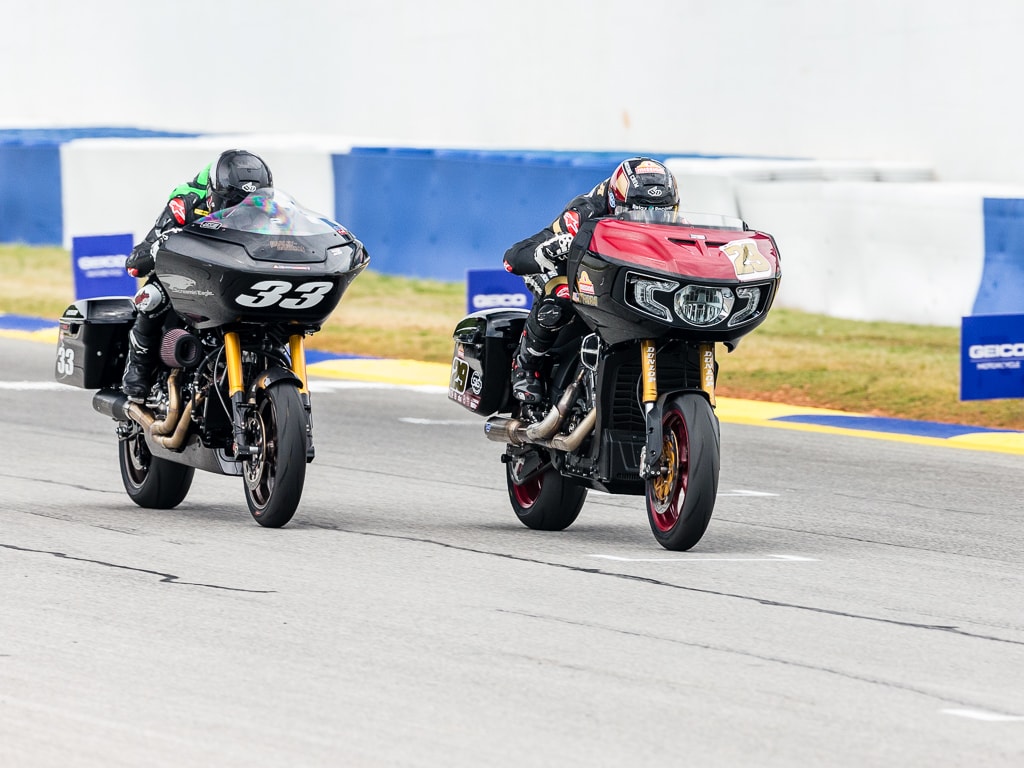 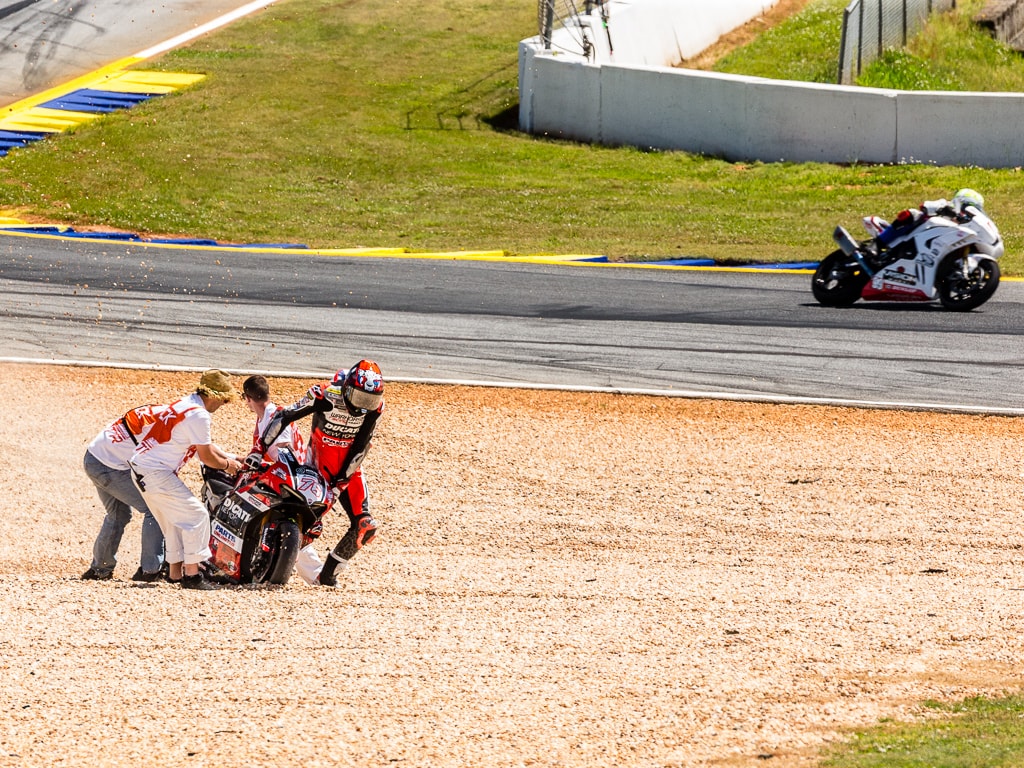 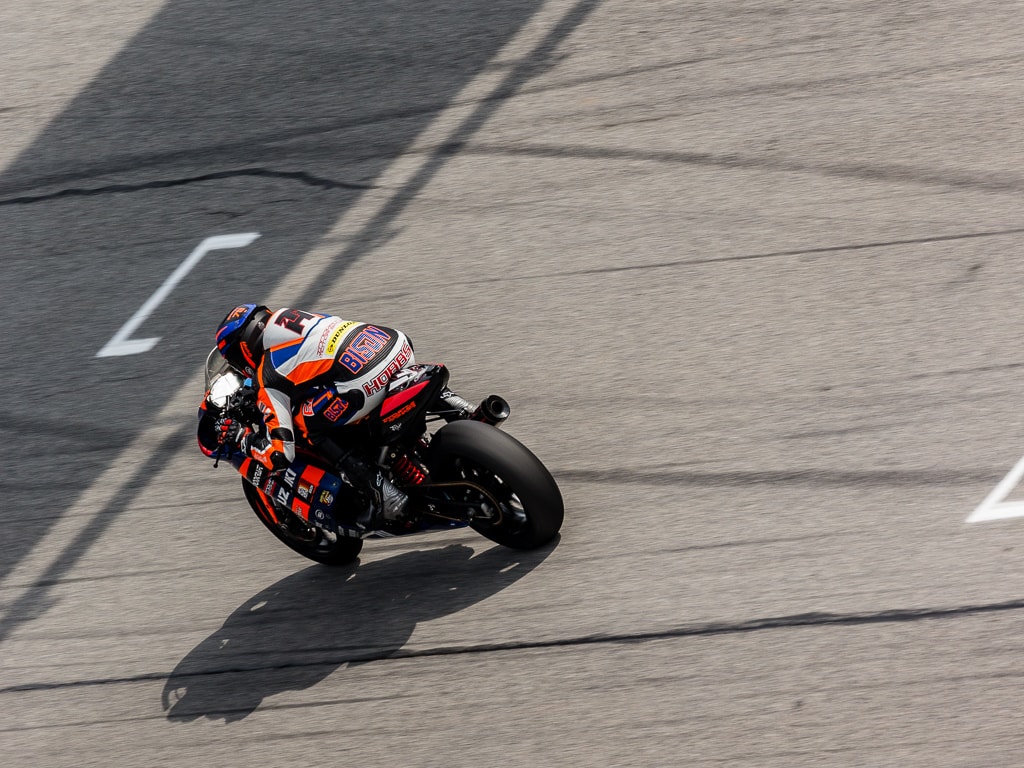 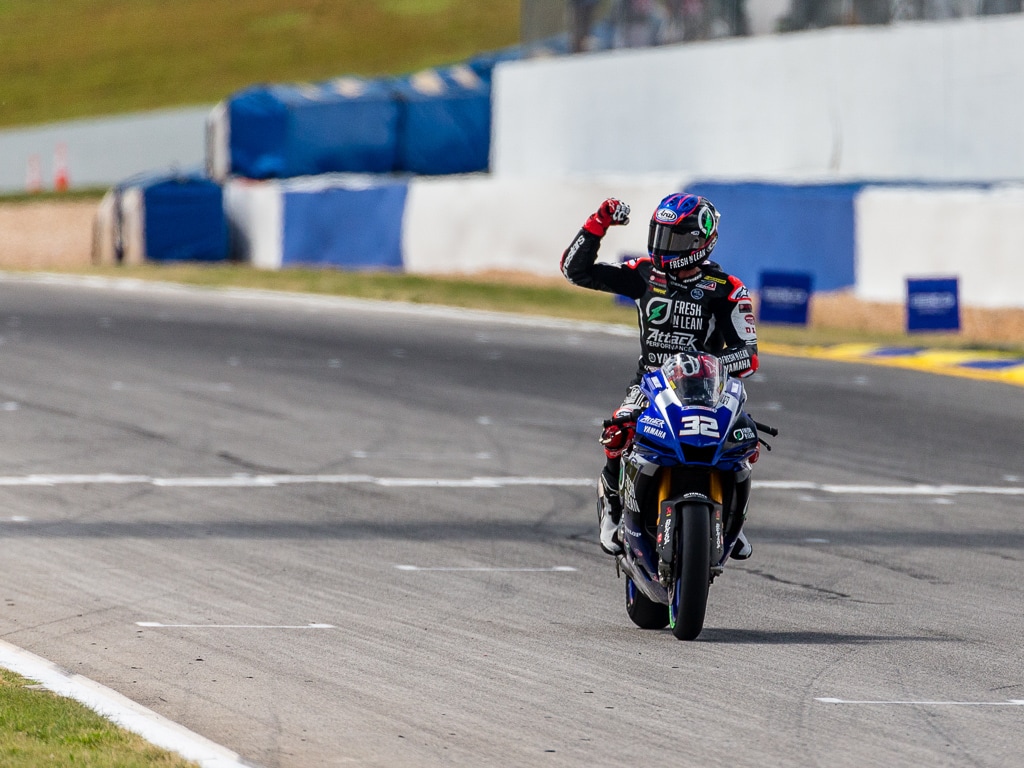 Shots around the two days of racing. Photos by Tim Lester Images.

Stock 1000 opened the racing Saturday, as long-time literbike road racer Michael Gilbert got the victory aboard his brand-new Kawasaki ZX-10R, prevailing over hard charging Jones Honda rider Ashton Yates, also astride a brand-new bike, a Honda CBR1000RR-R Fireblade SP. Good to see a Fireblade back on the grid. Both riders battled hard in the 13-lap event, as did third place finisher Travis Wyman, who raced his trusty BMW S 1000 RR to a coveted 3rd spot on the podium.

In Supersport, Richie Escalante renewed his battle against Sean Dylan Kelly, with Kelly actually dominating race one, leading from the pole and through a red flag restart, grabbing the hole shot both times and never letting go of the lead. Escalante had suffered a crash in qualifying, forcing him to utilize last year’s 2020 championship-winning HONOS Kawasaki, but it proved insufficient to keep pace with the M4 ECSTAR Suzuki of Kelly. Cycle Gear Racing Yamaha’s Nolan Lamkin survived the mayhem that led to the initial red flag and successfully reached the podium for his best-ever result in Supersport competition.

As it turned out, Jake Gagne suffered a blown engine under the Fox Racing bridge and Baz lowsided out at turn 10-A in pursuit of Scholtz, leaving the battle between the remaining predicted front runners. In fierce, fast competition, Scholtz took the checkered flag, followed by Fong then Herrin. Petersen took 4th. Incidentally, this was Scholtz’s first Superbike win on dry tarmac, his previous wins coming in rain at COTA in 2017, and Barber in 2018. 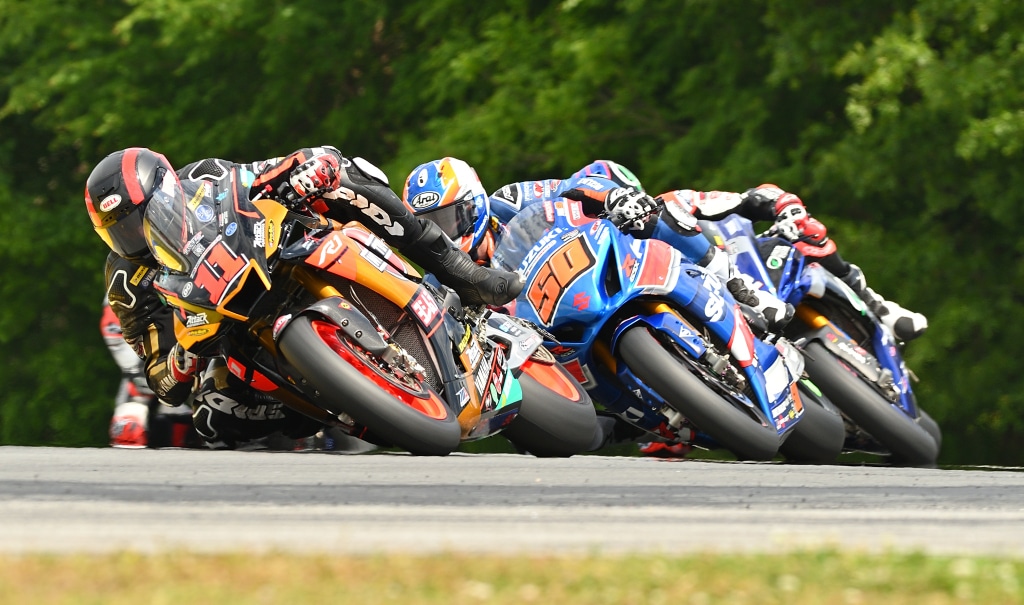 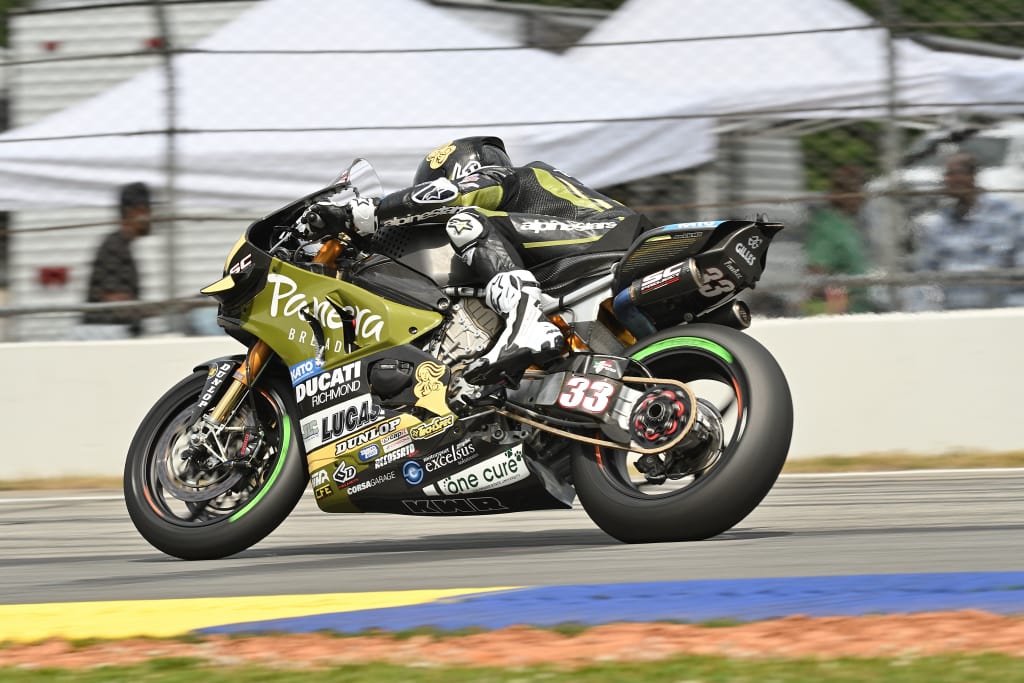 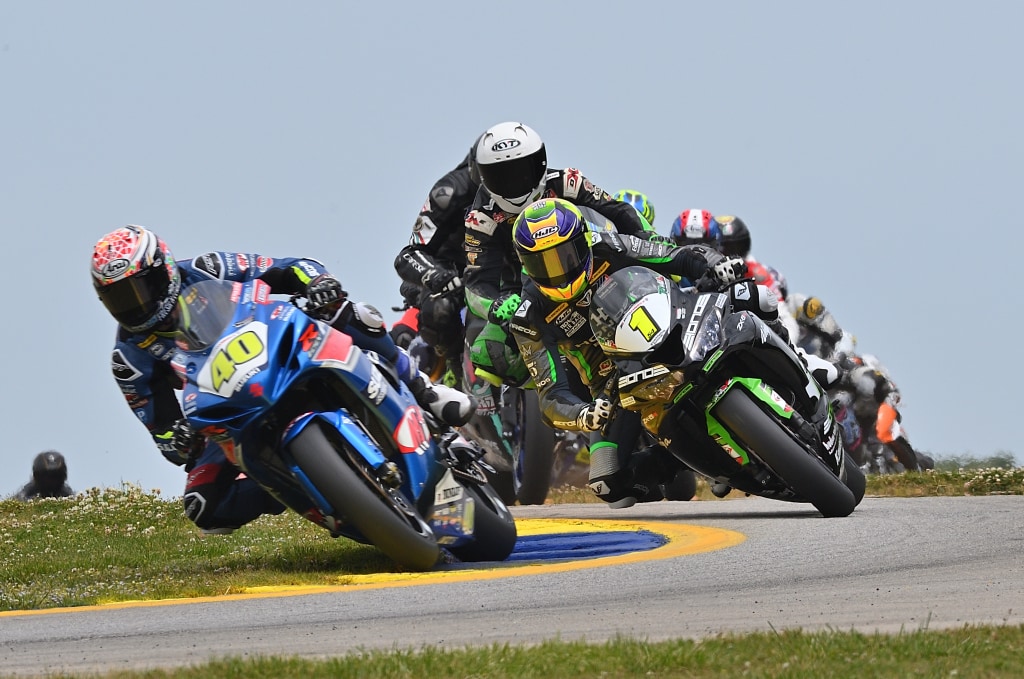 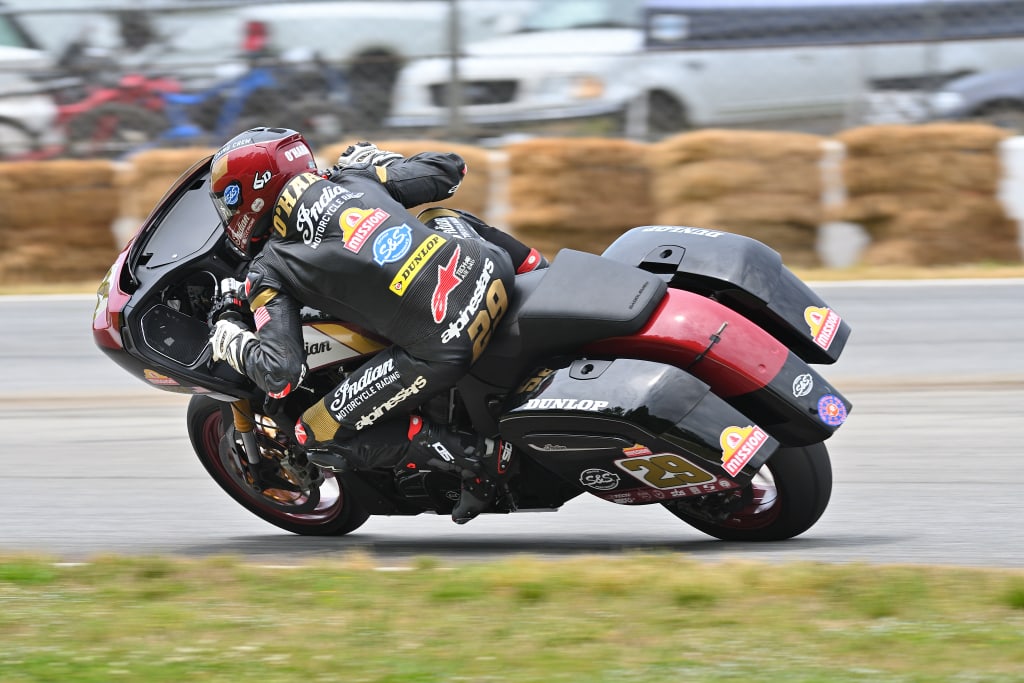 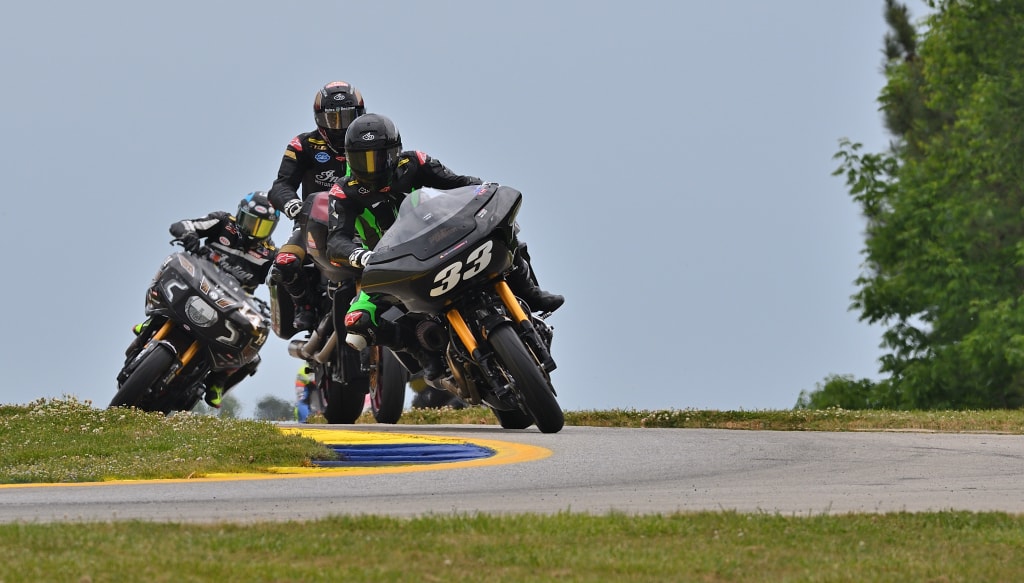 Sunday brought cloudy skies and cooler temps, and the day kicked off with Stock 1000 race 2. The middle Wyman brother Travis rode his Travis Wyman Racing BMW to victory one day after finishing third Saturday. Wyman caught up to and overtook early race leader Geoff May, who finished second aboard his Geoff May Racing/VisionWheel.com Honda. Meanwhile, Jones Honda rider Ashton Yates rounded out the podium after finishing second in Saturday’s race.

The highly anticipated Mission Foods King of the Baggers race ran next, and instantly renewed the ancient rivalry between Harley-Davidson and Indian Motorcycle. Mission Foods S&S Cycle Indian Challenger rider Tyler O’Hara, who was last year’s King Of The Baggers invitational winner, battled MotoAmerica Superbike rider Kyle Wyman aboard his Screamin’ Eagle Harley-Davidson Road Glide Special throughout the first five laps of the race, trading first/second and nearly trading paint. O’Hara took the lead on lap 5 of the 8-lapper and never let Wyman by again, ultimately snagging the win for this first round of the now 3-round Baggers series.

Supersport race 2 followed, with the battle renewed between top contenders Sean Dylan Kelly, Saturday’s winner, and 2020 defending champ Richie Escalante. Since Escalante had severely damaged his brand-new 2021 Kawasaki the day before, resorting to his 2020 championship bike for the rest of the weekend, he still gave an admirable run, claiming 2nd again behind a double-winning Kelly. Class rookie (yet 3-time MotoAmerica champ in Junior and Twins Cups) Rocco Landers pulled off a final-turn inside jump on the remaining pack to claim the 3rd spot.

Next up came race 2 for the SportBikeTrackGear.com Junior Cup, and Ben Gloddy finally broke through with the race win that he’s been coveting for the past couple of years. A frequent visitor to the podium, but never on the top step, Gloddy, who races a Kawasaki for Landers Racing, took the checkers in Sunday’s race two by a scant .127 of a second over Scott Powersports KTM rider Tyler Scott. Third place on Sunday went to KERmoto Kawasaki’s Cody Wyman. Incidentally, Wyman’s podium result completed a rare road racing trifecta, with all three Wyman brothers finishing on the podium: Travis winning in Stock 1000, Kyle finishing second in King Of The Baggers, and Cody coming home third in Junior Cup. Quite an accomplishment, and huge congrats to the Wyman family.

The Superbike race 2 saw a renewed Jake Gagne take charge of the pace, with Mathew Scholtz, Bobby Fong, and Josh Herrin dueling for the lead around the famous track. Frenchman Loris Baz fought to hang with the leaders, until a broken shift linkage forced him to pit in for a quick repair. Fong, who had inadvertently rolled forward before the start, was penalized with a pit ride-through, forcing him to give up a temporary lead in the pack. Soon, Gagne seemed to find another level, pulling away from Scholtz, Herrin and the field. The win went to the resurgent Gagne, his first-ever Superbike victory, with Scholtz taking 2nd and Herrin climb the podium for another 3rd place finish.

Twins Cup race 2 rounded out the weekend and was quite eventful, with Kaleb De Keyrel, Teagg Hobbs, Jody Barry and Hayden Schultz battling for the lead through the first half of the race. With six laps left, De Keyrel’s bike started spewing fluids entering turn 1, and as Hobbs swerved to dodge, De Keyrel high-sided, lofting him into the air towards the center of the track. In the melee that ensued, Barry, Schultz then Toby Khamsouk all slid off track, riders and bikes tumbling into the gravel and air fences. Ironically, all four bikes involved in the kerfuffle were Aprilias, three being the podium dominators from Saturday. After a red flag restart, none of the crashed Aprilias reentered, and Pure Attitude Racing’s Trevor Standish got the holeshot, with Teagg Hobbs and 2018 class champ Chris Parrish in hot pursuit. Soon Hobbs pulled ahead, Standish in tow, with Parrish struggling to hang with the new race leaders. And so it finished, Hobbs, Standish, then Parrish taking the podiums, all astride Suzuki SV 650s. 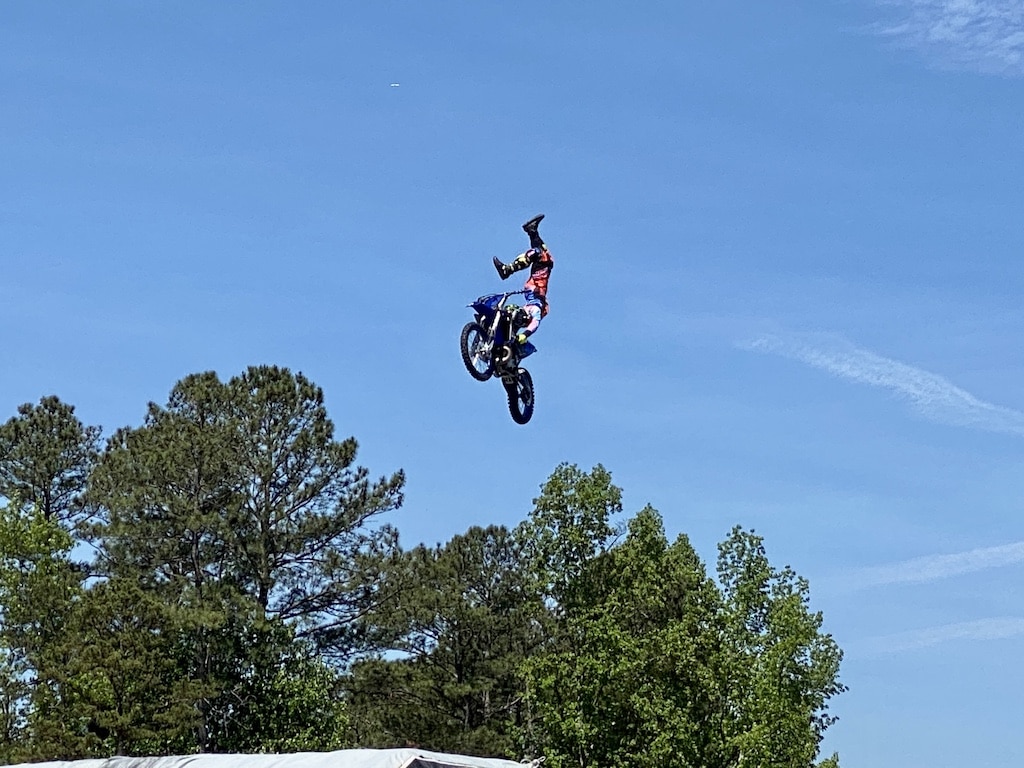 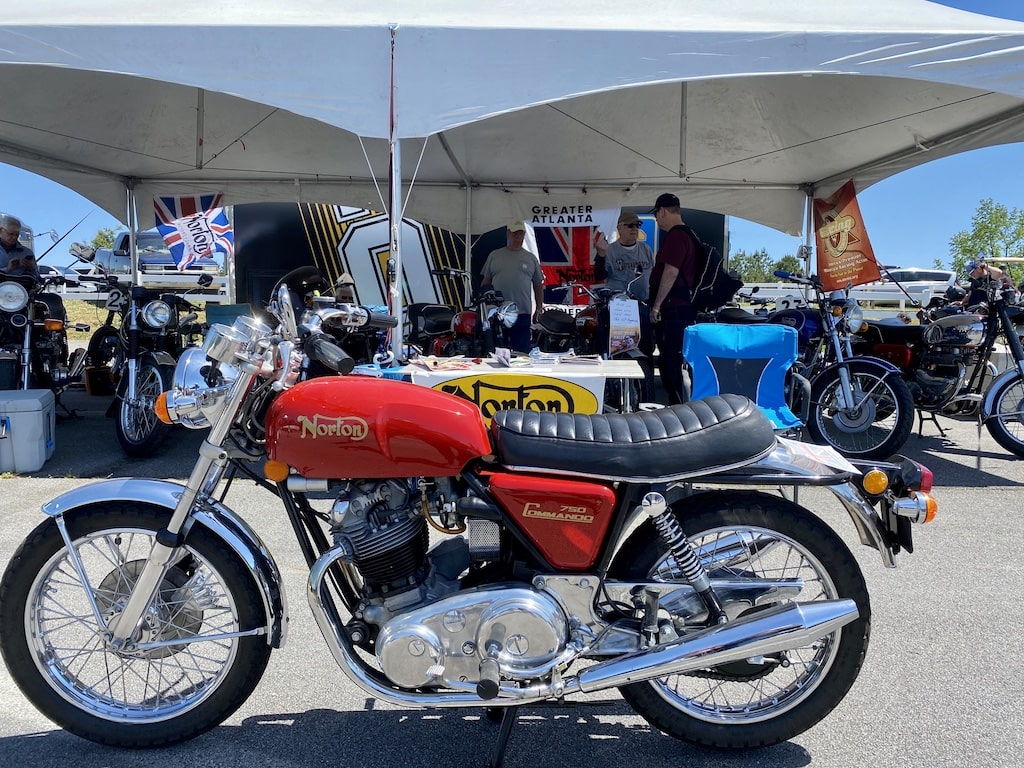 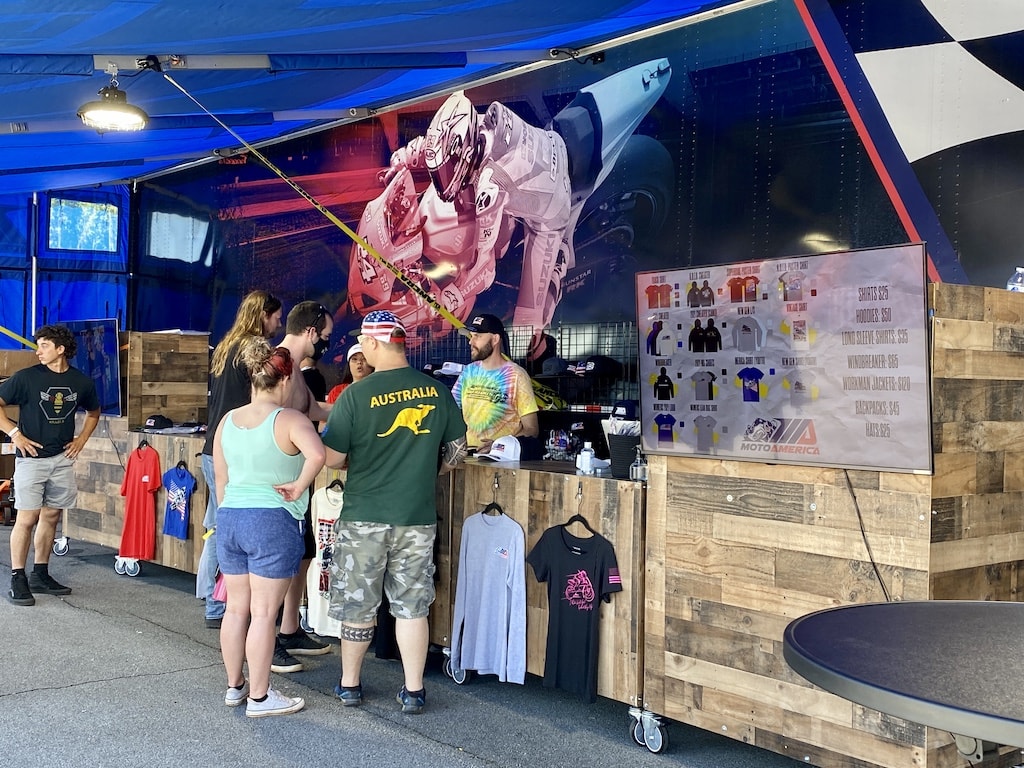 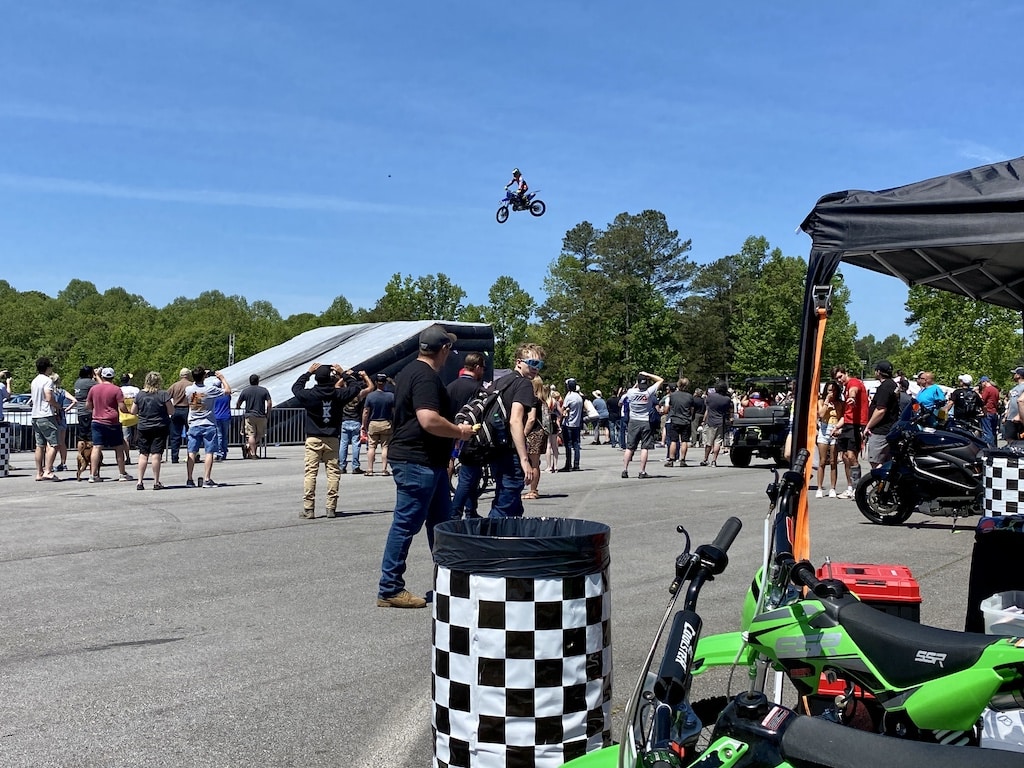 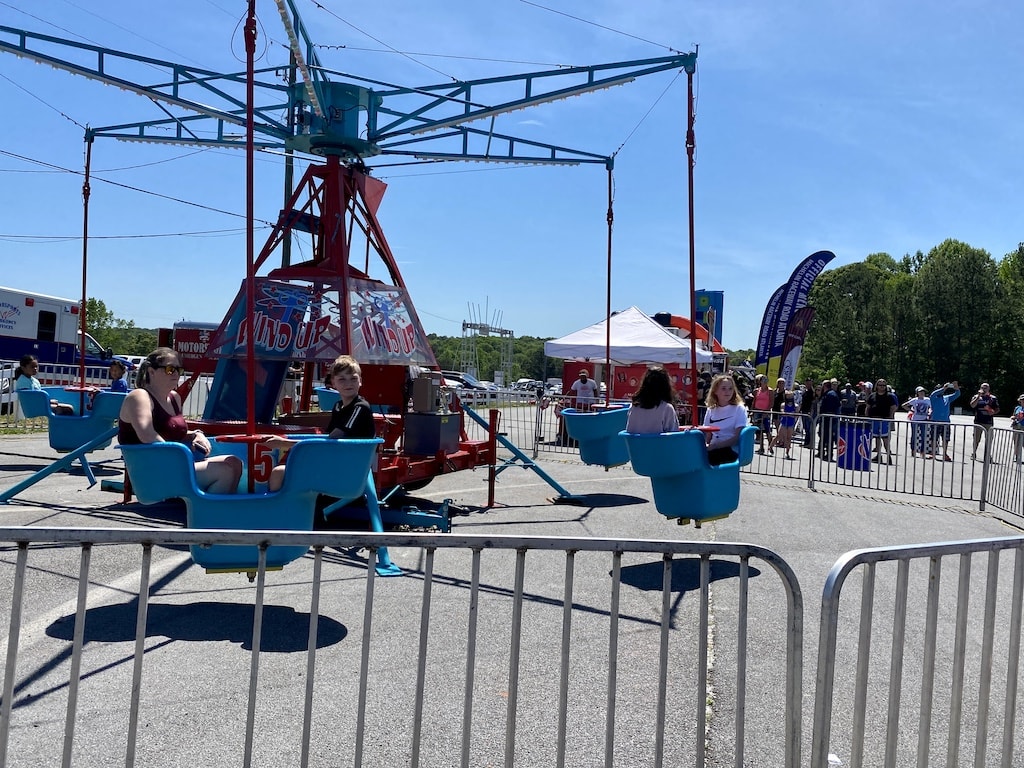 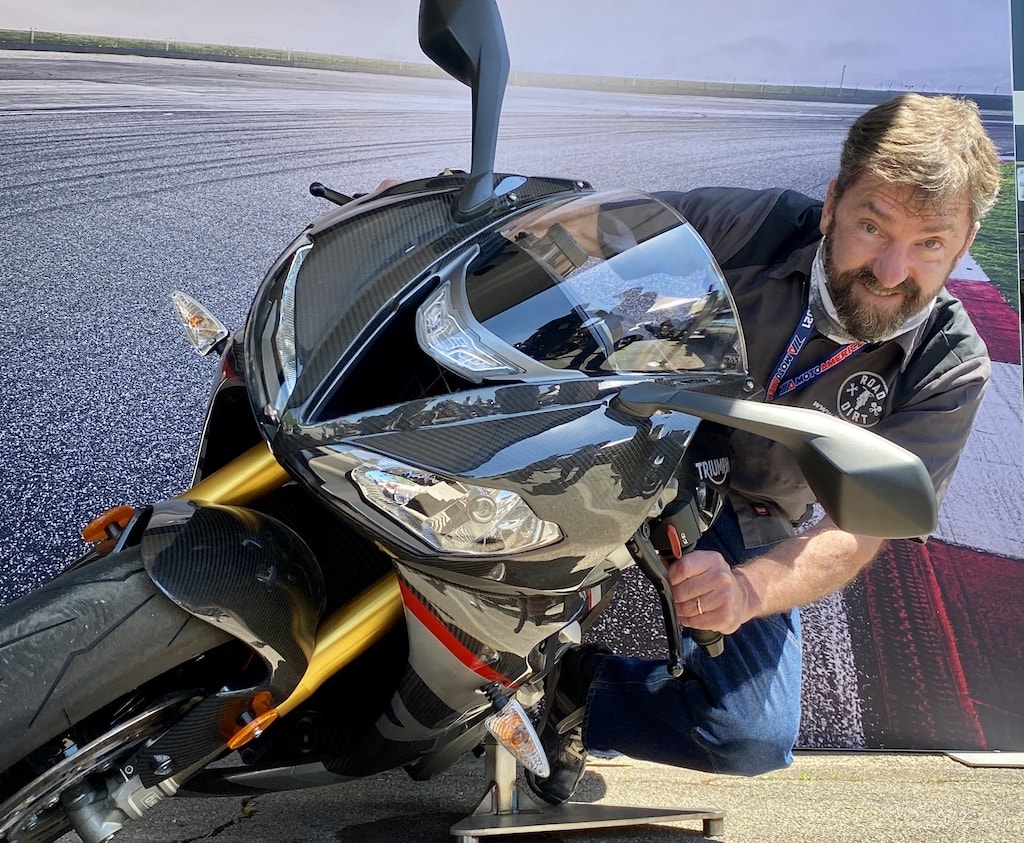 Rob’s shots around the Fan Zone.

Thus ended the first round of the 2021 MotoAmerica racing season. We had anticipated and even predicted that each class would see intense competition and amazing finishes, and we were not disappointed. The season opener at Michelin Raceway Road Atlanta was a thrill ride from start to finish. And speaking of thrills, the Fan Zone played host to some very enjoyable family fun, with stunt shows, games rides for children, great local food fare, and demos/rides by Triumph America and Indian Motorcycle as sponsors. Sources within Road Atlanta and MotoAmerica both told us they believed the attendance this weekend was 2.5x larger than the attendance last year, and the attendance rivaled the “heydays” of the late 90s-early 2000s at the track. Indeed, everywhere around Road Atlanta we roamed, the crowds were thick and the enthusiasm palpable. The perfect race weekend, in about every way imaginable.

Special kudos to our friends at MotoAmerica for such a fantastic weekend at the track, and of course the wonderful folks at Road Atlanta. We also wish to thank our friends at Triumph America and Indian Motorcycle for their hospitality. You made a great event even better. 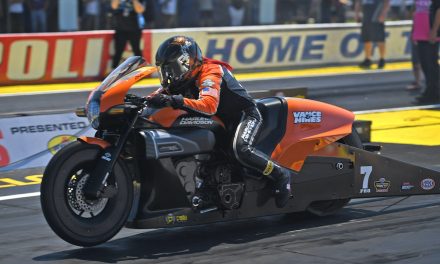 The Queen of Speeds 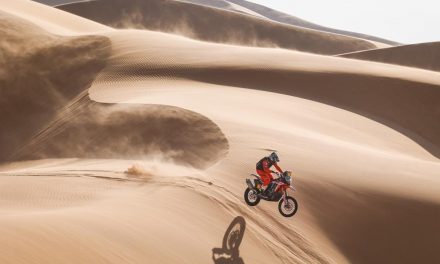 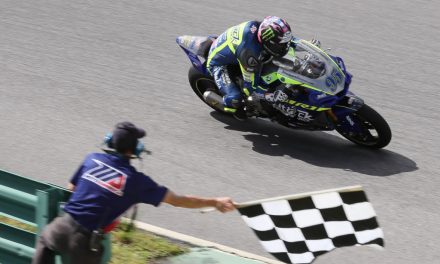 A Beach of a Week 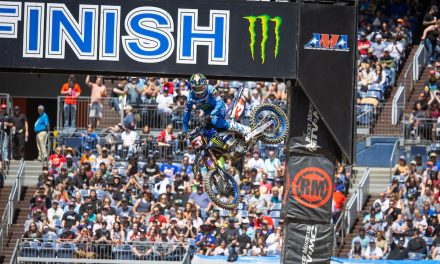