My Ace In The Hole 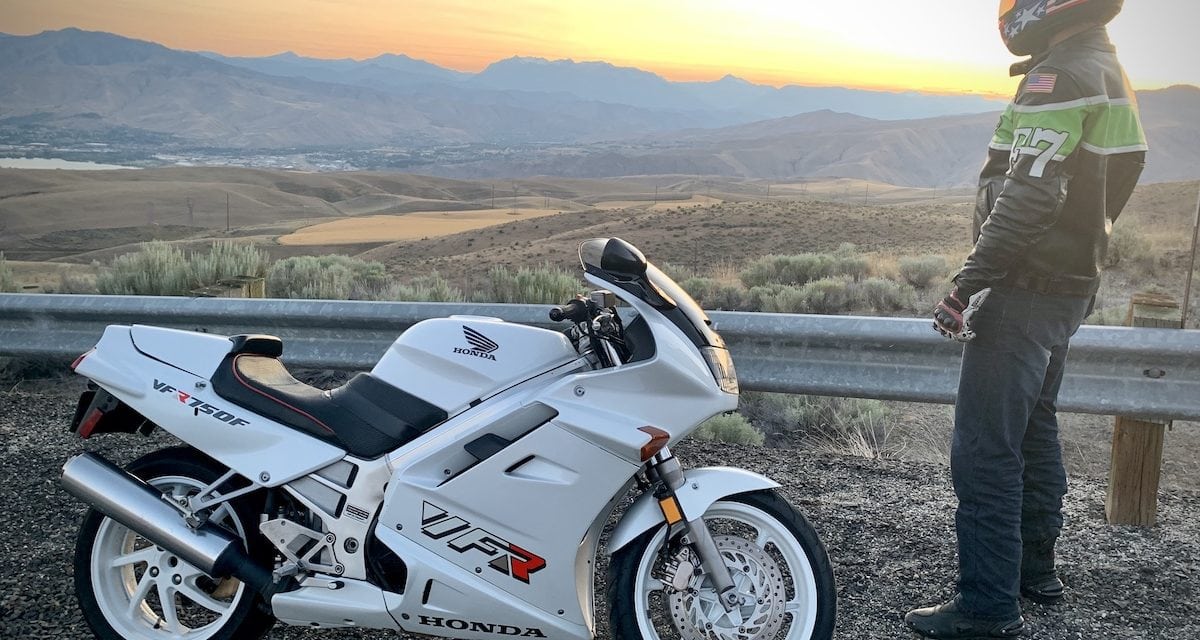 Motorcycle riding is both addictive and therapeutic

Christmas Day 2017 was horrid, my right temple pounding so feverishly that when I laid still I could feel the artery moving and squirming under my skin like a worm burrowing an agonizing hole in my head.  Opening my jaw in an attempt to eat created so much misery that I couldn’t chew.  I hadn’t eaten in days.  Any kind of sensory stimulation caused pain: light hurt, sound hurt, even the texture of fabric on my temple caused me to wince.  I spent days during the holidays cowering under a blanket hiding from sound, light, food and people.  Total sensory deprivation was my only relief, but that wasn’t the worst part.

The worst part?  I had no idea what was wrong.

I am normally a healthy person.  I rarely get sick, almost never see a doctor and only go to the emergency room if my life depends on it.  I searched for causes like a fall or a skiing accident but came up empty.  After days with no improvement my hunger reached the breaking point and I decided to eat for the first time.  I made toast and took a bite.  Big mistake.

Opening my jaw caused my eyes to roll back into my head with anguish and when I bit down, the crunch of the crust echoed through my hollow head with an excruciating reverberation.  I felt like I was chewing gravel.

I dropped the plate and lost control of my emotions.  I was broken.  Tears flowed.  I was not only suffering through the pain and hunger but for the first time, though I never told anyone, I was scared.  Then I did something so rare that it shocked everyone: I asked my wife to take me to the emergency room.

The ER doctor there was a seasoned veteran, experienced and polite as I described the past few days.  When he touched my temple I recoiled in pain and fear like I had been punched.  His upbeat attitude dropped, replaced by a cold, businesslike demeanor.

“I haven’t seen one of these in years,” he said.

Hospital noises and examination lights caused searing pain yet through the mental fog, I tried to focus on his words.  I heard him mutter something about Temporal Arteritis followed by, “We are doing something about this right now. I’m putting you into surgery in the next 48 hours.”

When I got home I researched Temporal Arteritis and began to understand his grave (no pun intended) demeanor.  Temporal Arteritis (TA) has an average onset age of 72 so me being stricken at age 47 was an anomaly.  Women are afflicted 2 to 3 times more frequently than men which meant statistically I was more than twice as likely to have male breast cancer than TA.  If left untreated the side effects of TA are a wretched list including stroke, aortic aneurism and permanent, irreversible blindness.  Strangely, death by stroke or aortic rupture didn’t bother me as much as the last one.  Those three words haunted me: permanent, irreversible, blindness.

I pondered the unfriendly hand of cards life had dealt, and the solitary thought poking through the fog of agony surprised me.  It wasn’t about can I keep my job, will the surgery hurt, will insurance cover my illness, or will my dog still love me. It was this: Will I still be able to ride my motorcycle? 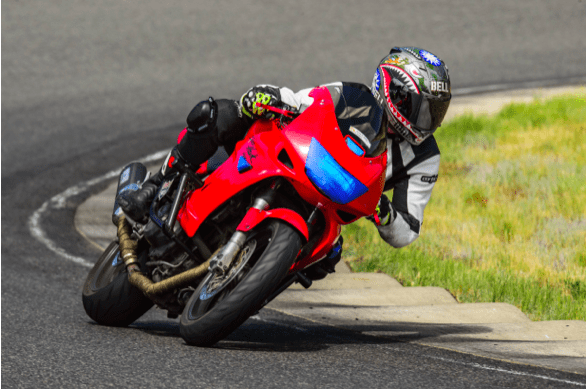 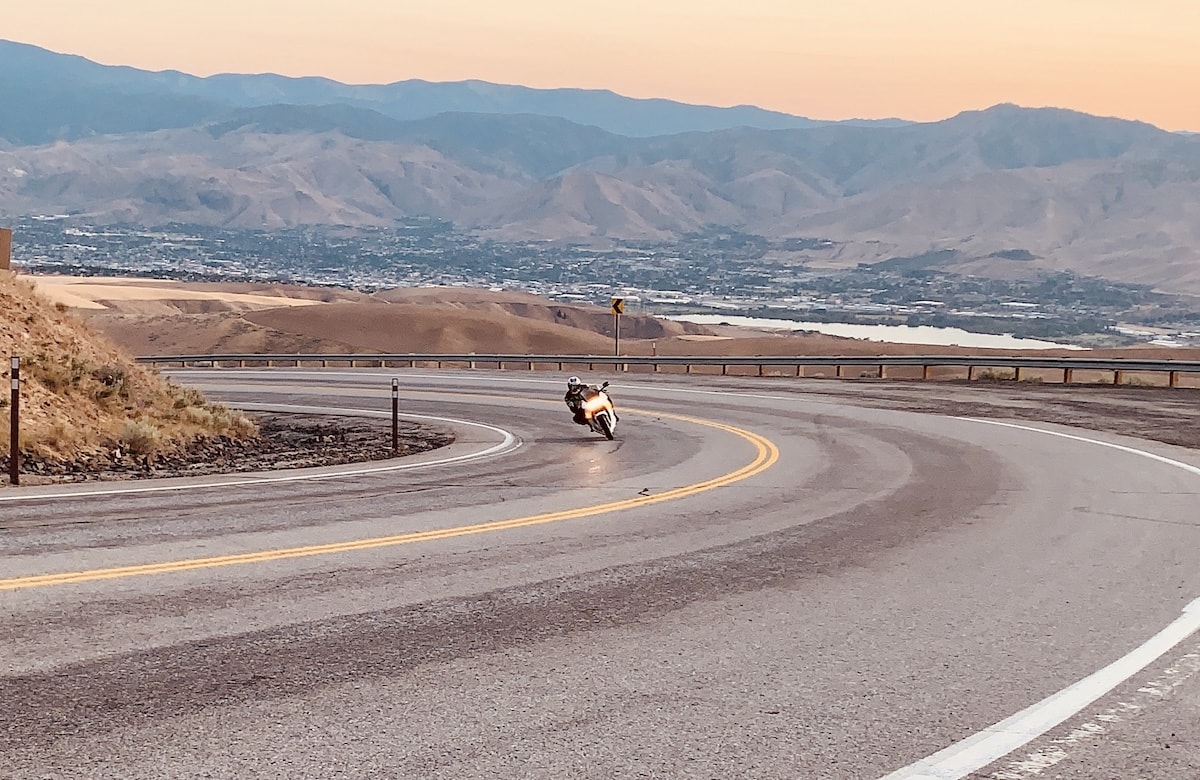 Would I still be able to do this?

Why that?  With everything else going on, why was that thought bouncing around in my malfunctioning cranium?  Was my pain causing delusions?  Is this what going mad feels like?

The more I am around bikers, the more I realize I am not crazy.  Something about a motorcycle makes you want to get back in the saddle at any cost, no matter what.  Once motorcycling enters your bloodstream, it never leaves.  You probably know of someone (or you are that someone) who suffered an injury and through therapy, perseverance or sheer force of will returned to riding.  Motorcycle lore is filled with stories of people who ride again after overcoming injuries physical or emotional, or both.  Senior editor Rob knows a little something about that too.

During a World Superbike race, John Hopkins crashed and injured the ring finger on his throttle hand.  After 6 surgeries and much time and money spent, he decided to amputate the finger to avoid missing the rest of the racing season.  His only regret was, “With it being Friday the 13th I should have asked the doctor to wear the mask and dress up like ‘Jason’ as they chopped the finger.  Ha Ha.”  Yeah, ha ha indeed.

Once motorcycling enters your bloodstream, it never leaves.

Troy Bayliss was leading his 2008 WSBK race at Donnington when his Ducati spit him onto the tarmac coming out of Coppice Corner at 100+ mph.  Troy used his testicles to break his fall which goes against everything Keith Code teaches about braking technique.  As he left the track, no doubt nursing his ruptured nut, a kid in the crowd asked for one of his gloves.

I don’t know about you, but I am not the kindest person in the world when injuries hit that close to home.  However Troy, being the gentleman he is, took off his glove to give it to the spectator.  As he removed his glove his little finger came off with it, giving the kid a rather unique souvenir.  That night, surgeons removed what remained of his mangled pinky finger and operated on his exploded family jewel.

“I was finished using it,” he quipped after surgery.  Somehow, I have a feeling that one of Troy’s testicles retained more than enough manhood since 10 days after losing the pinky and saying goodbye to a dearly beloved body part, he got back in the saddle (ouch!) and put his Ducati on pole at the Valencia GP. 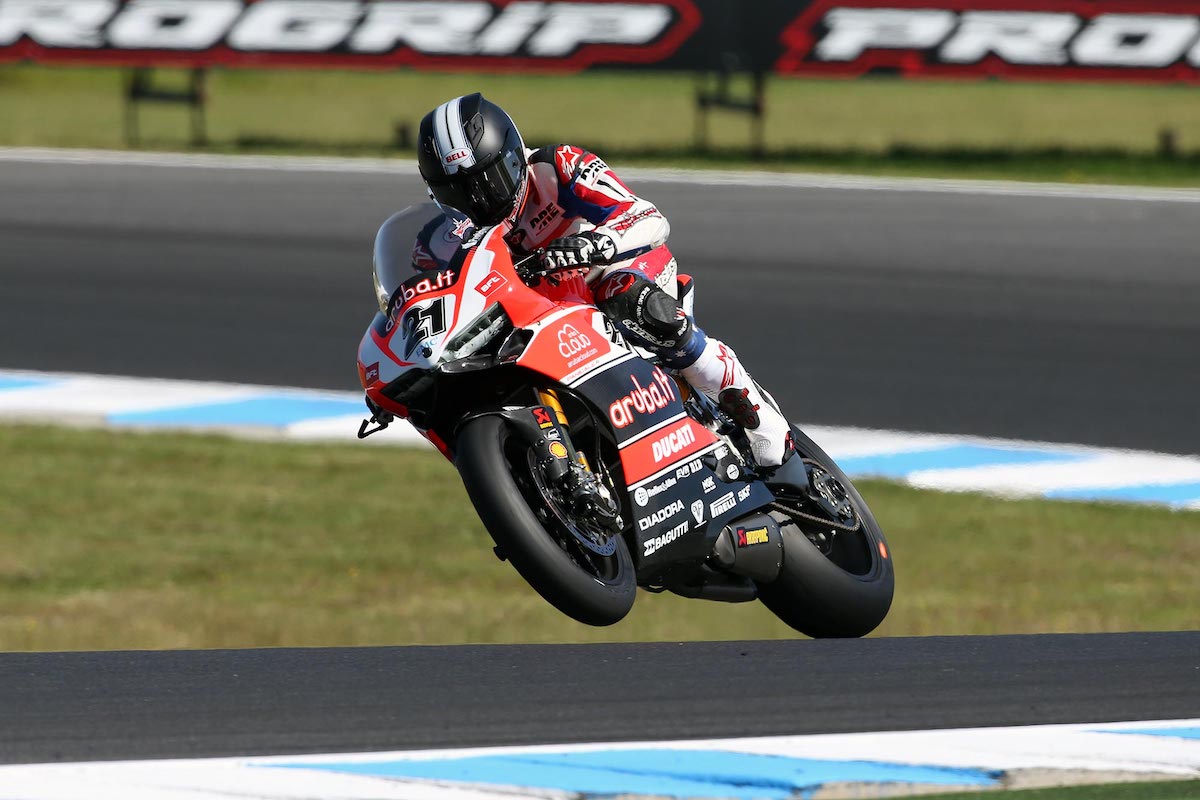 Troy Bayliss doing what he does best, and loves most. Photo by Ducati Corse

When asked why, the Aussie replied, “Cut a long story short, I still love riding the bike and that’s it.  When the time comes I’ll either turn up on a Sunday or just f*@# off to the beach and no one will ever hear from me again. But that time is not yet.”  As I read Troy Bayliss’ story his last two words dug into me like the worm digging a hole in my temple.

Troy’s cold steel determination packed in that simple declaration changed my attitude.  Damn straight brother, not frickin’ yet.  I could be a victim, or I could take charge.  I was not in charge of whatever was putting my brain in a vice, but I was in charge of my attitude.

After surgery to remove my temporal artery my doctor called with the results- The tests for TA came back negative.  Using his Ivy League medical degree and decades of experience he summed up his diagnosis by saying, “I have no idea what in the hell is wrong with you.  That’s good news.”

“Well,” he said, “if I knew what was wrong, I would have to treat it.  I don’t know what it is, so I get to do nothing.” Not very encouraging.

Today, years after the whole episode, the symptoms have tapered to the point where I live with it.  Most days I don’t notice it while other days are, well, just other days.  Medication to abate the effects had side effects themselves almost as bad as the disease and have been replaced by holding a quart of ice cream to my temple where my artery used to be.  Tastiest therapy ever, and I don’t even have an Ivy League medical degree. 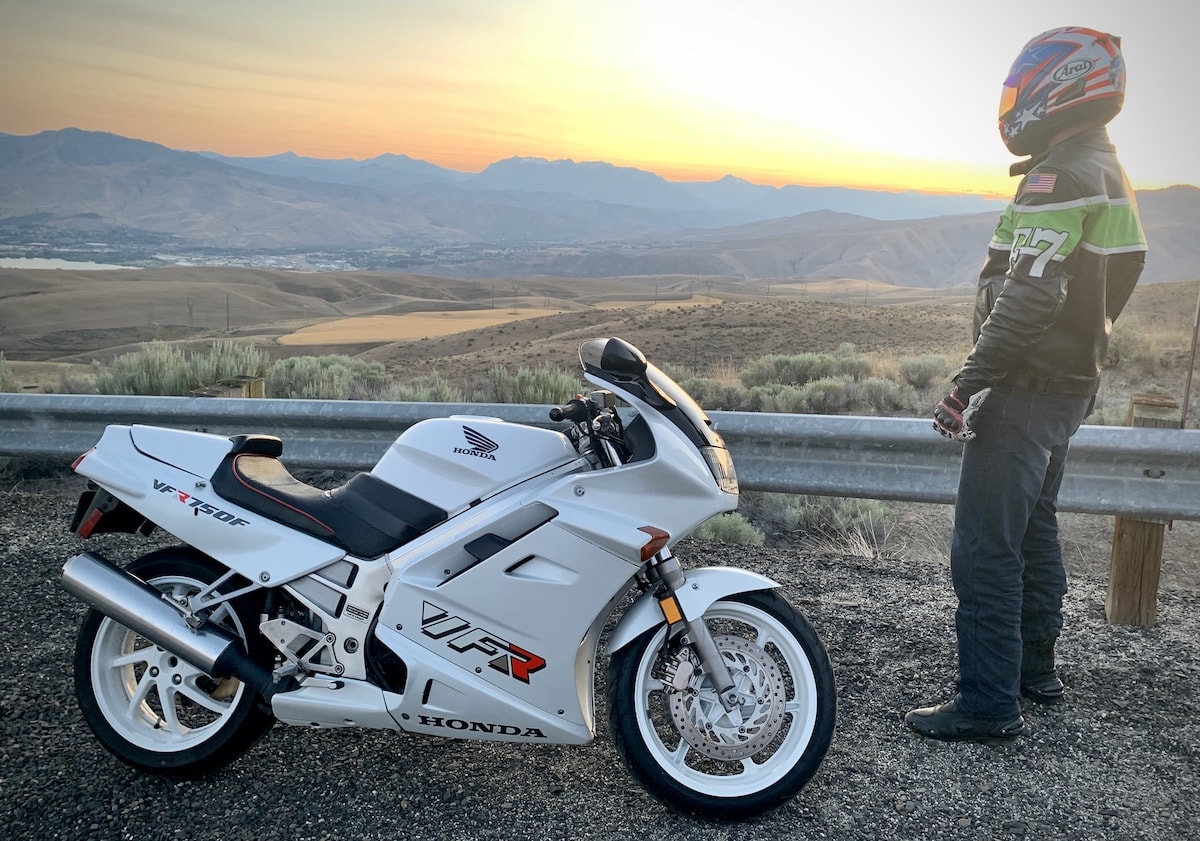 Besides, I still have all of my digits and both of my nuggets, so I consider myself a lucky man.  But the best therapy?  A ride on one of these babies.

Can you relate?  Do you find motorcycle riding both addictive and therapeutic as well?  Share some thoughts with us in the comments below.  We always enjoy hearing from you. 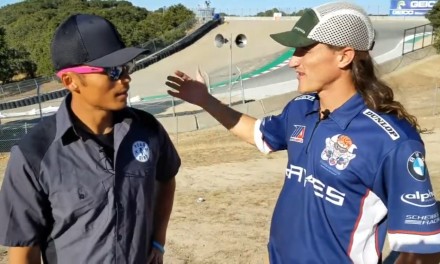 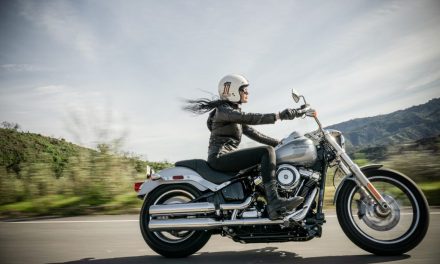 Rapture of the Road 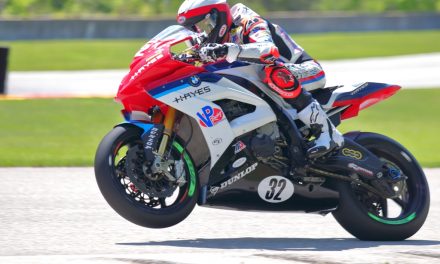 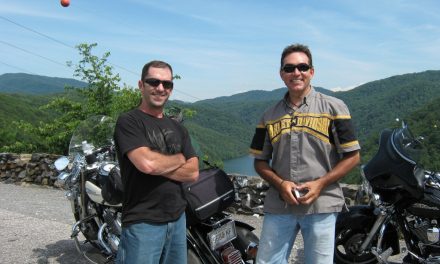