A Modern Helmet, with Vintage Roots

I’ve long ridden with and appreciated Bell helmets. As kids, my brothers and I wore Bell lids while we tore dirt bikes through the woods behind our house in Fayetteville, Georgia and around my cousin Tommy’s house two towns over. Many racers I grew up watching on tv, whether road racing or dirt, wore Bell helmets, with that big white oval, red letter “BELL” logo emblazoned on the forehead above the visor. Bell Helmets meant racing glory to me, and turns out, for good reason.

Bell Helmets has a long, interesting history, a truly American story. The company actually started in 1923 as an automotive parts store, Bell Auto Parts, named not for a founder, but for a town- Bell, California. A guy named Roy Richter worked for and then bought out the store in 1945 for $1000. By 1954 Richter began producing race car helmets, then established Bell Helmet Company in 1956 as a division of his auto parts store. In 1968 Bell debuted the Star, their first full-face motorcycle helmet and then in 1971, they produced their first full-face, off-road moto helmet. And the rest, as they say, is history. 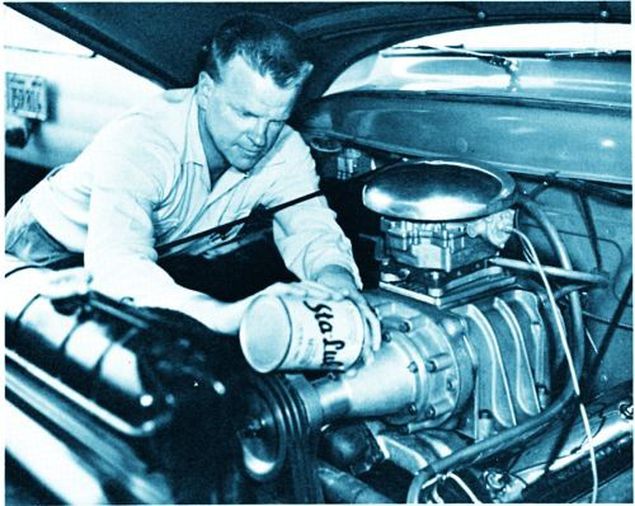 Every Bell I’ve owned over the years I’ve been well pleased with. The last one I bought, a Qualifier DLX, even rocked a “Transitions” visor, which I’ve absolutely loved. So when I decided to add a new helmet to my moto wardrobe, I sought out my friend JC Maldonado with Bell Helmets, to see what we could acquire and do a review on. He directed us to the Eliminator line. 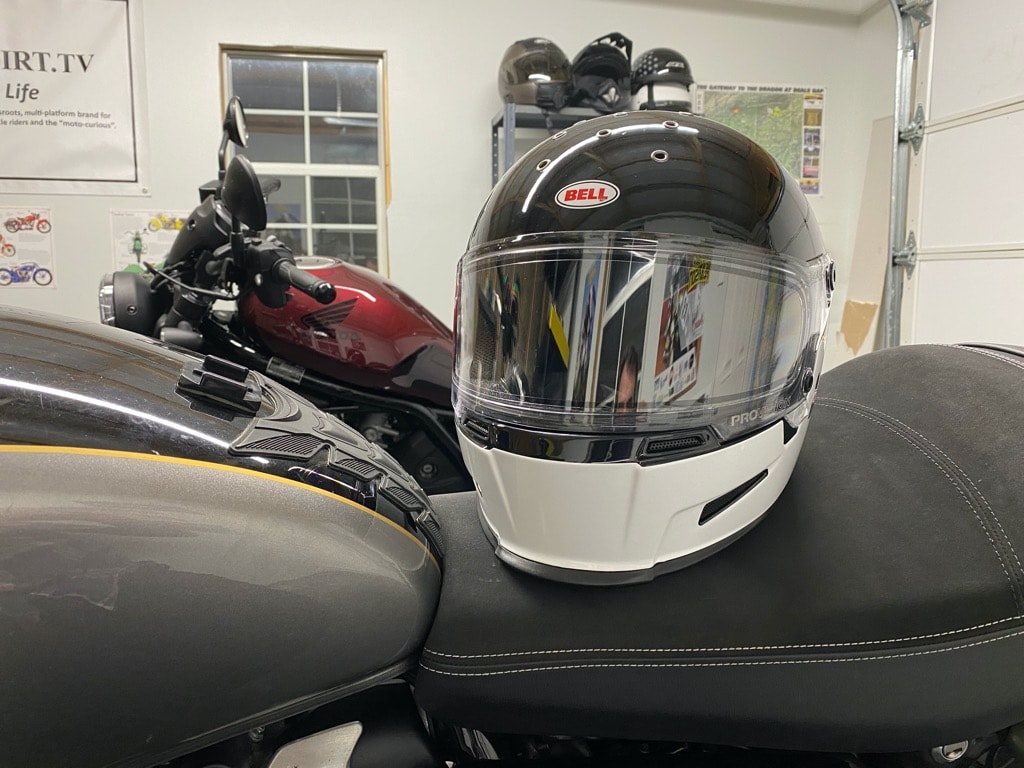 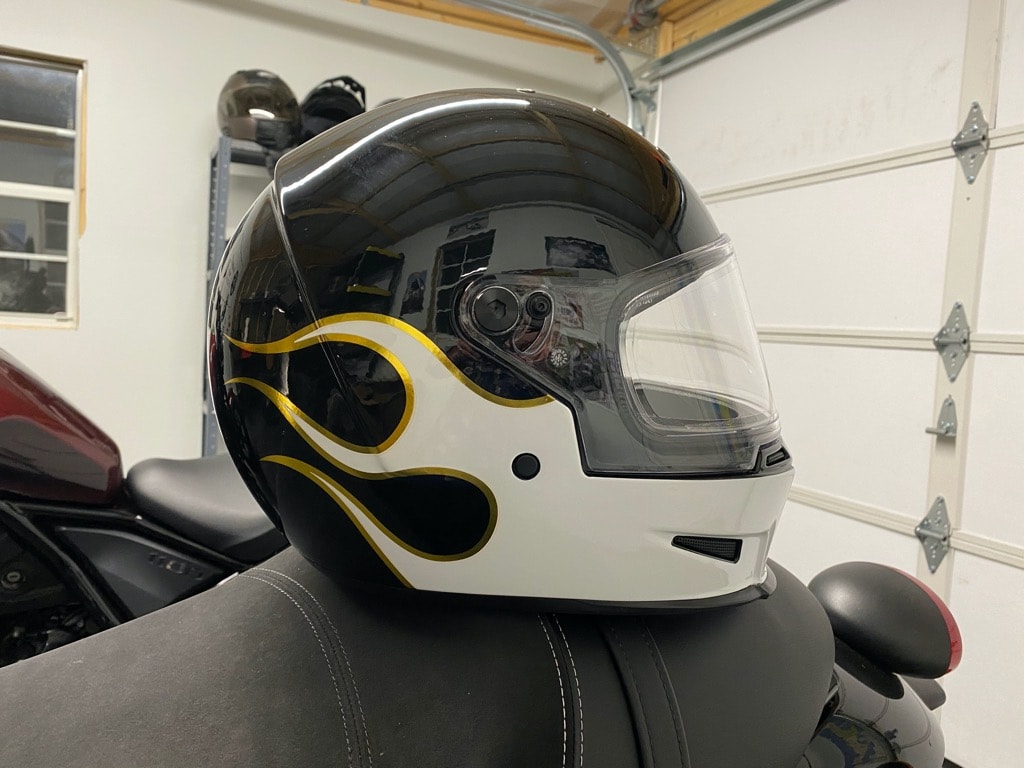 I ordered the Stockwell style helmet for its 1960s retro flame design, which matches well with my Triumph Bonneville Street Cup and old school leather jacket, while Phil opted for the Vanish Matte Black with red accents, which paired nicely with his candy apple red Harley-Davidson Road Glide. Unpacking and pulling the helmet on for the first time, I noticed an immediate comfortable yet snug fit, which I actually liked even better than my go-to Qualifier lid of the past several years. The hook and loop chin strap was easy to cinch, and I appreciated the magnetic clip at the end of the strap which affixes to the left rings with a firm grip. The competition grade ProVision face shield really does dissipate breath fogging nicely, and clicks hard in place via a left side knob the visor snaps over. I found it hard on occasion to pop it back open with thick gloves, it fastens in place so firmly. Definitely not flying open at road speeds or in the event of an “off”. 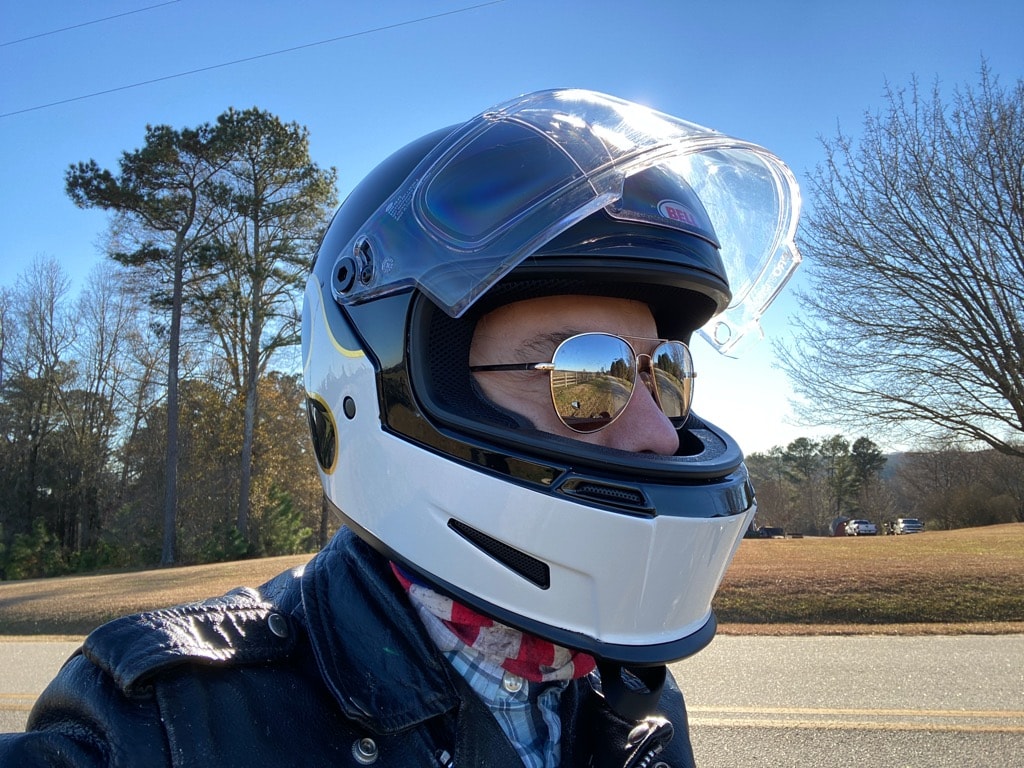 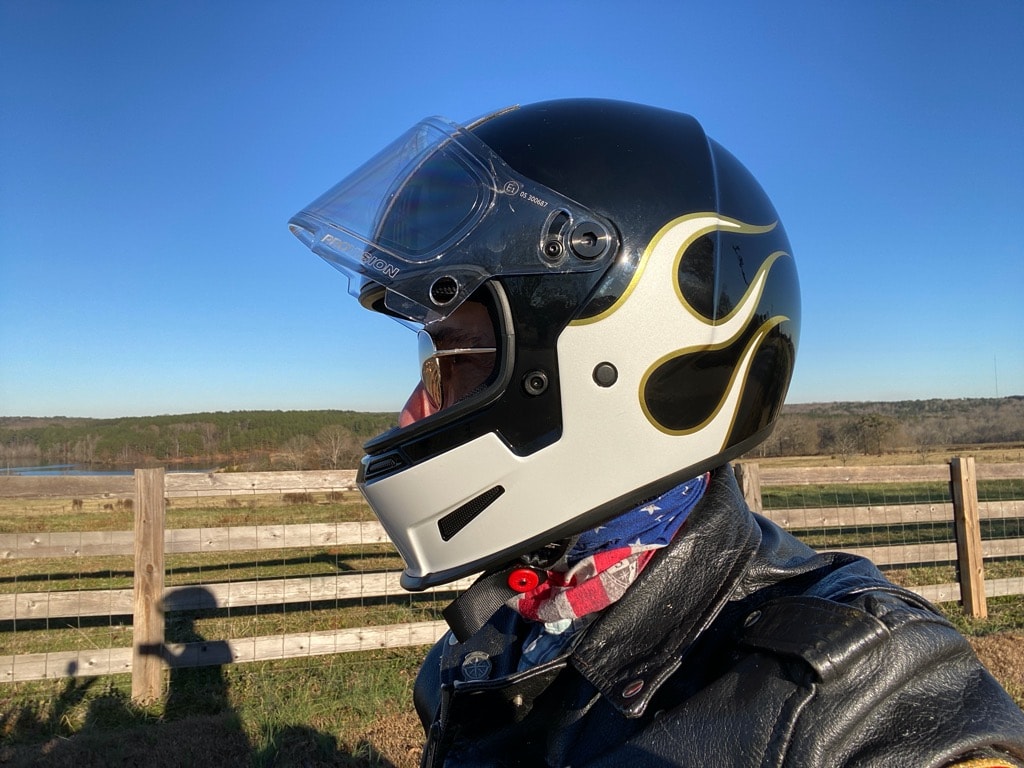 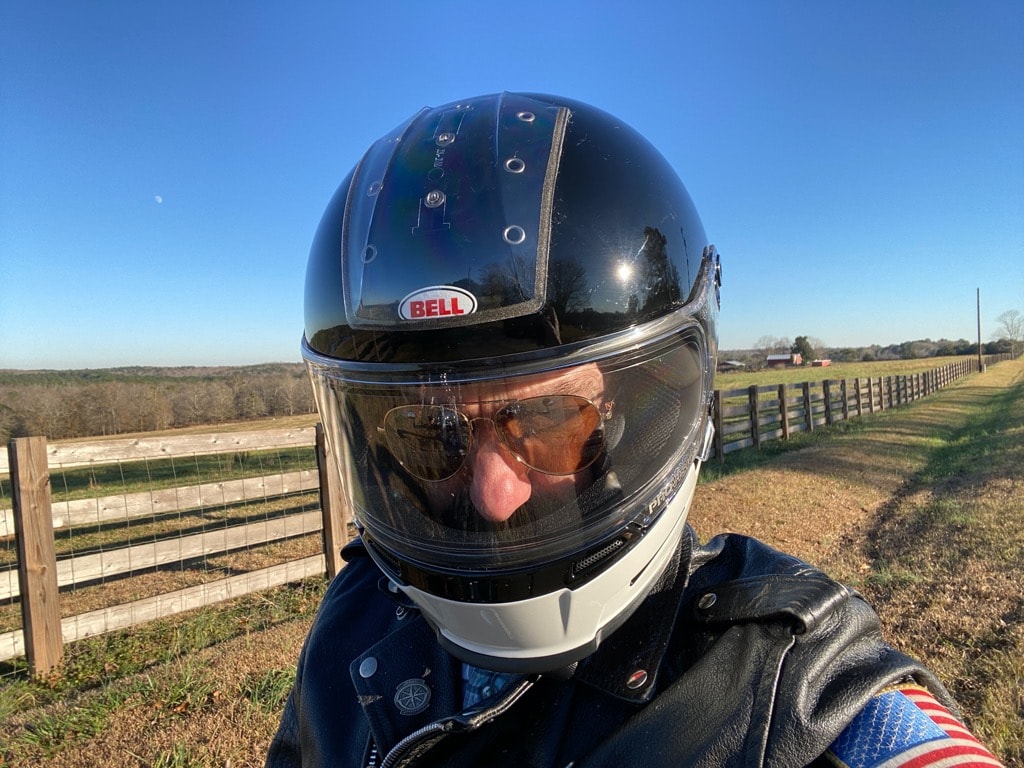 Speaking of road speeds, a few elements of the Eliminator helmet I soon discovered I was not keen on were the four non-adjustable honeycombed vents in the front chin area, the lack of venting in the rear of the helmet, and the lack of a wind breaking chin flap across the bottom front. At speed, wind turbulence blew right up into my eyes without that curtain, and I’d have liked the ability to close the chin vents if needed. This was the first full-face helmet I’ve owned (at least since the helmets of my youth) that had no protective chin curtain and no closures for vents. I reached out to JC with Bell to inquire as to why the Eliminator line is lacking these features, and he replied, “The Eliminator is a ‘throw-back’ automotive racing style helmet, and the styling, features and construction are meant to authentically recreate that look. While it may not have closing vents and a chin curtain that some riders prefer for commuting, it offers aggressive styling that stands out in a crowd. Fortunately, Bell makes a helmet for nearly every type of rider. If features like closable vents and a chin curtain are must haves, we have you covered with other helmets like the Star and Qualifier.” I get that rationale, but this is a motorcycle helmet, not an auto racing one. I alleviated the issue by wearing a neck gaiter pulled up under the helmet a bit (I have been riding in colder winter weather), and by wearing riding sunglasses that in fact fit well in the glasses sleeves of the helmet liner. 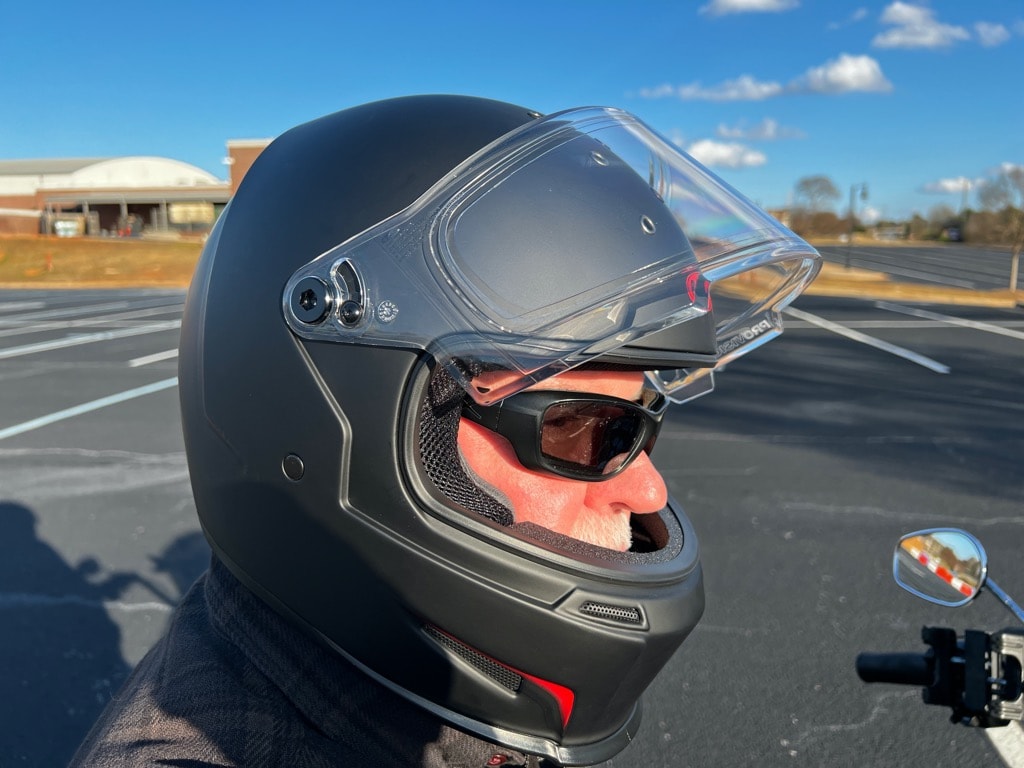 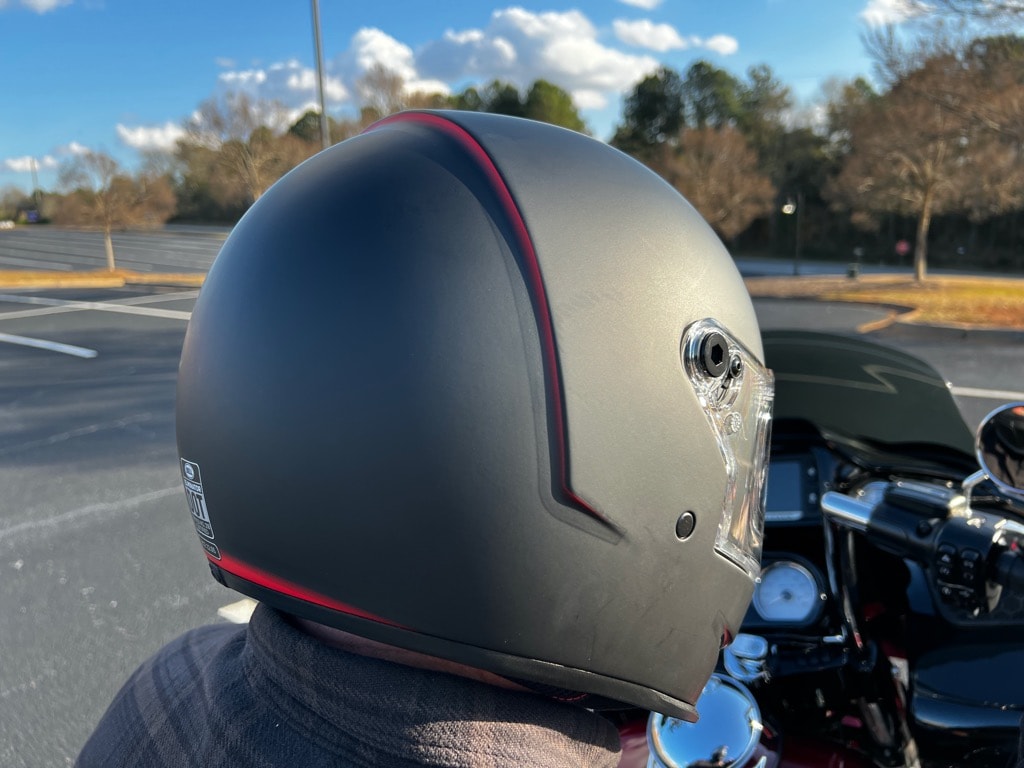 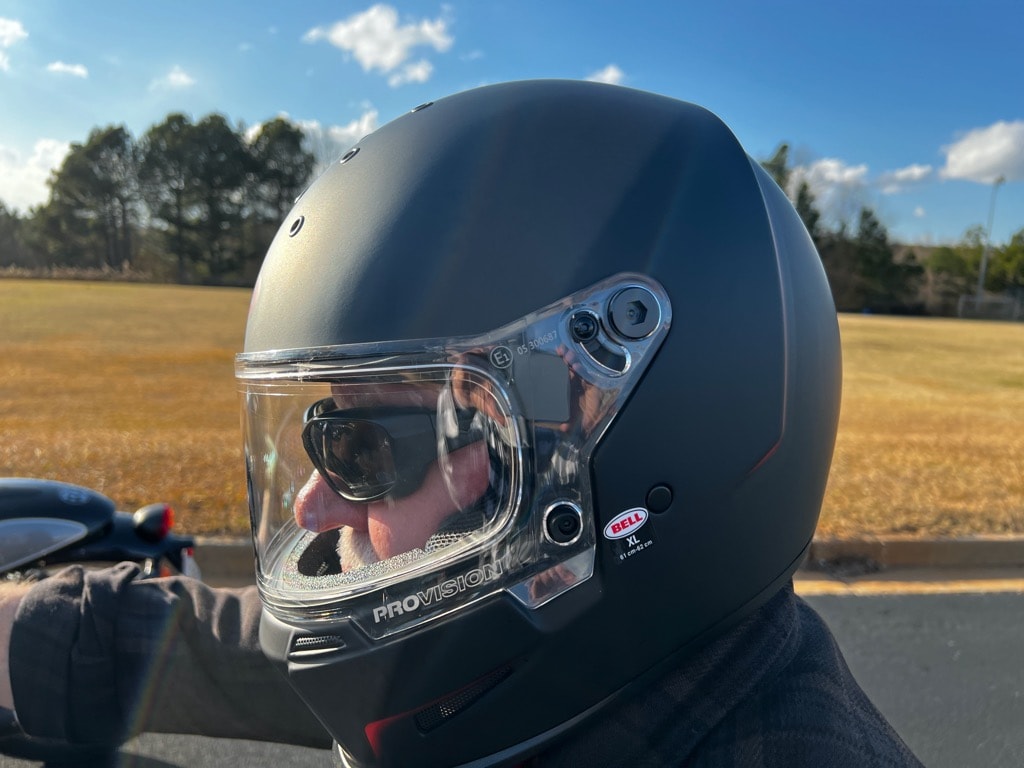 I have noticed how well the interior construction sound dampens better than my old Qualifier, as well as my previous full-face buckets. The entire interior cranial construction and composition is very comfortable yet muffles outside wind noise adequately, whereas other full face lids I’ve rocked over the years necessitated wearing ear plugs underneath to preserve my already declining hearing, the wind noise was so intrusive. I’m pleased with the sound damping of the Eliminator design, even without a chin curtain. Might be even better muffled with one, Bell?

Phil’s impressions were somewhat varied from my own, given the large fairing he rides behind on his H-D Road Glide. He actually loved the open chin area on the helmet, observing, “It affords plenty of room for a mic setup in the front, should someone want to install a communicator in the helmet.” His first observation however, was regarding the anti-fog face shield by ProVision- “Every full-face I’ve owned has fogged up immediately and at stops unless I pop the visor a little. I’ve got no fogging in this one.” We both noted the wide field of view the ProVision shield provides, with Phil telling me during an afternoon ride, “This nice wide visor shield gives a really broad field of vision for seeing left and right when approaching intersections.” Like me, Phil felt the helmet fit like a glove immediately, no break-in needed. “This fit is amazing,” he noted. 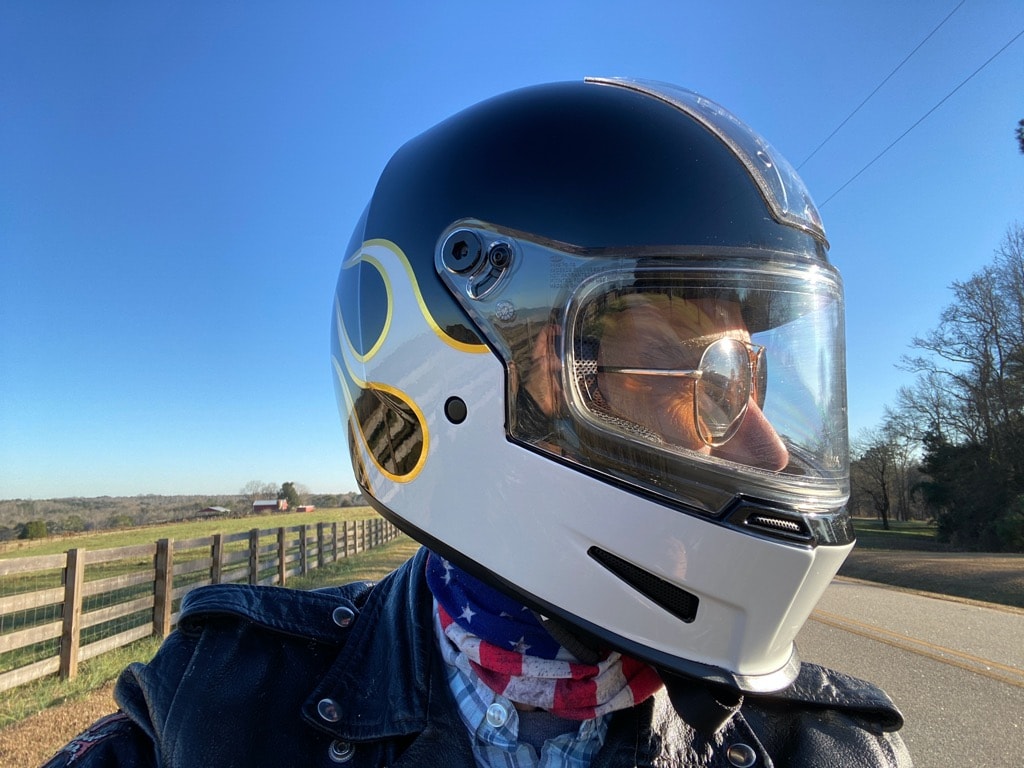 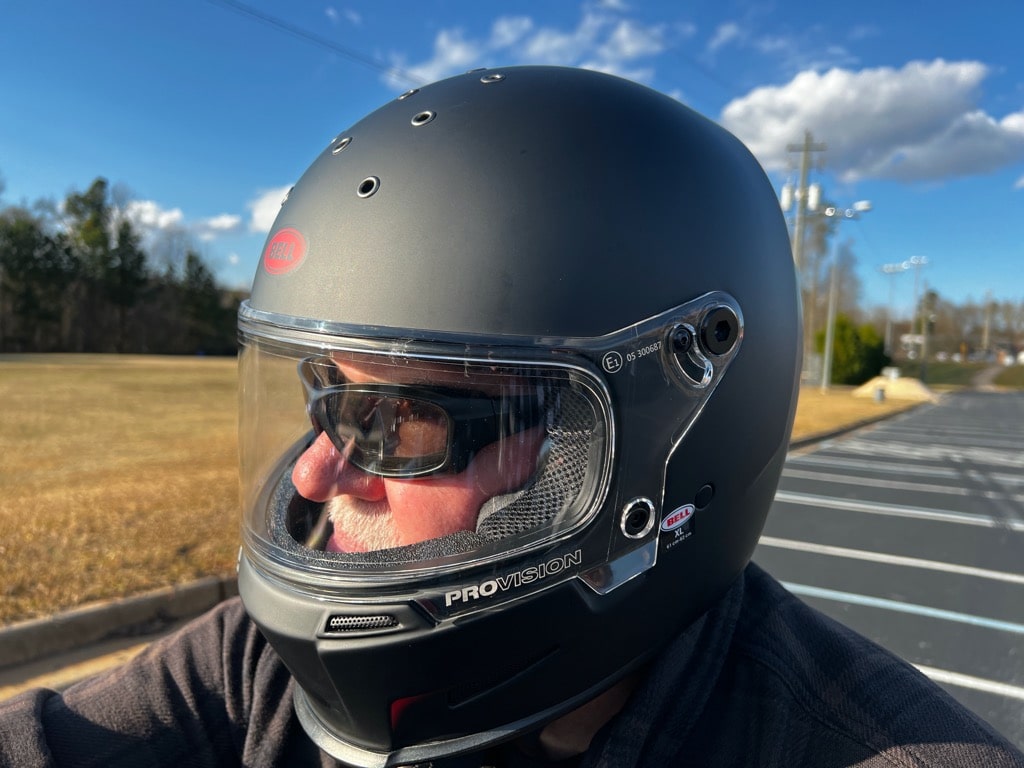 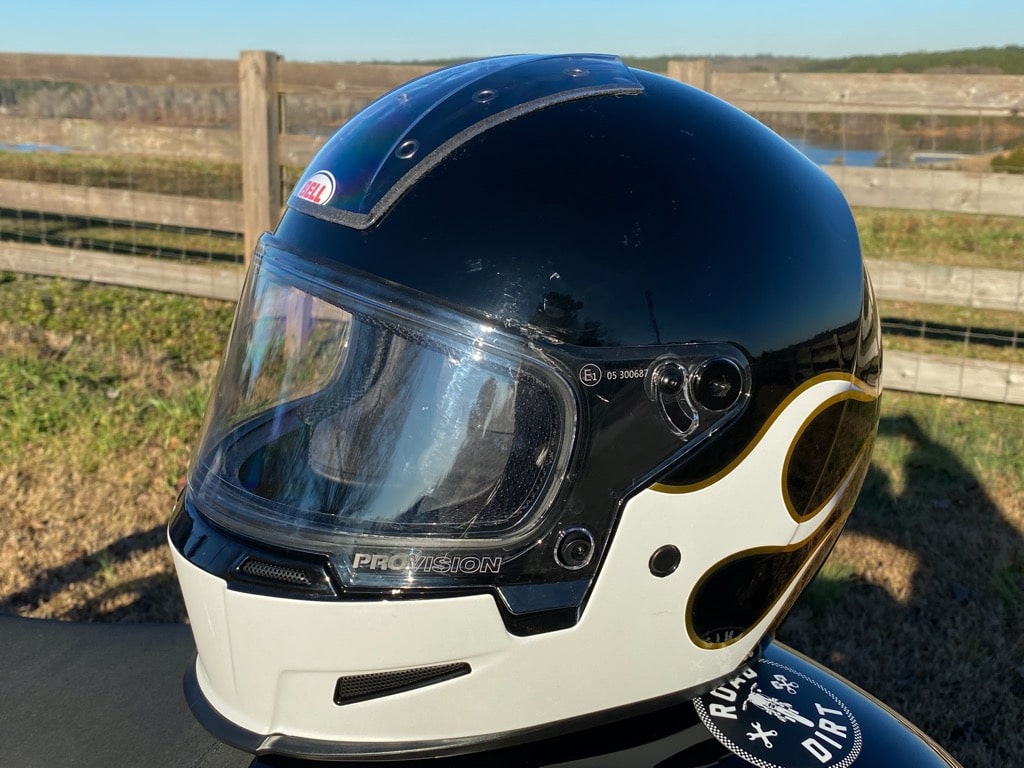 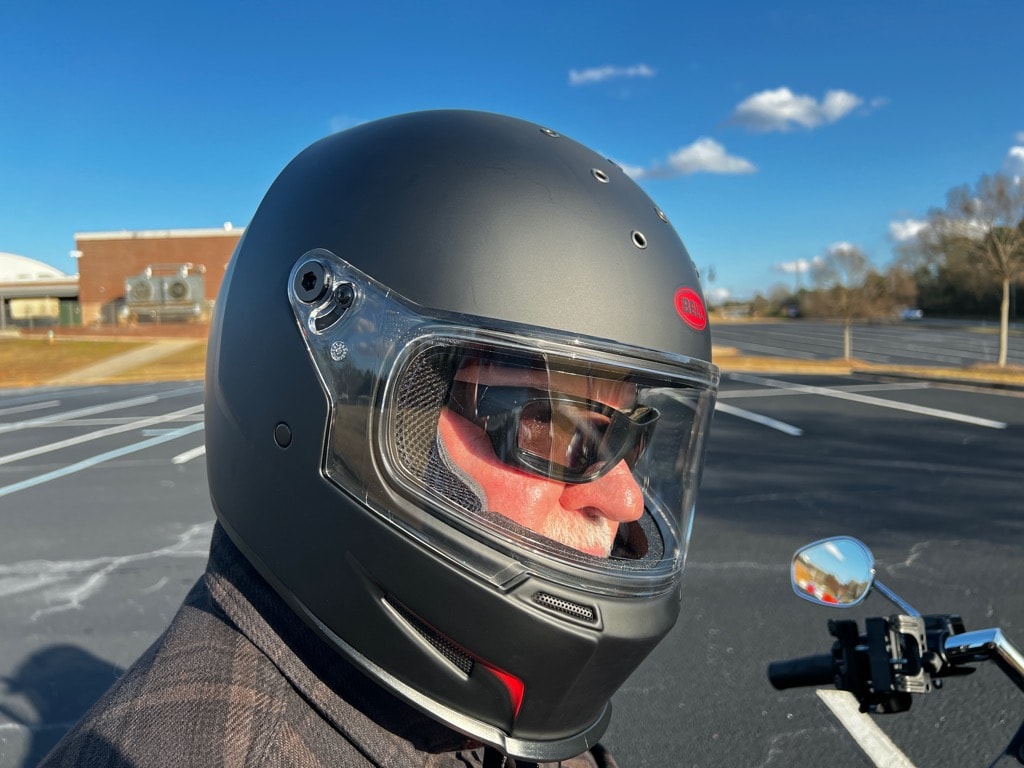 From old school to ultra mod versions, the Bell Helmets Eliminator line is a fine set of helmets.

So we’d have to give this Bell Helmets Eliminator line a B+ rating, considering both our observations and impressions. They each have a fantastic fit and finish, they look fabulous, and are lightweight and comfortable for a full-face helmet. If they could just add a chin curtain and adjustable vents, we’d give it an A+. Nonetheless, the Bell Eliminator helmets are a great value, especially considering they are currently running a sale on several of the variants. Grab you one now, while they’re marked down some.

For more on the Bell Eliminator line, click here:

*Check out our video review with some cool onboard ride footage here, without ever leaving this page- 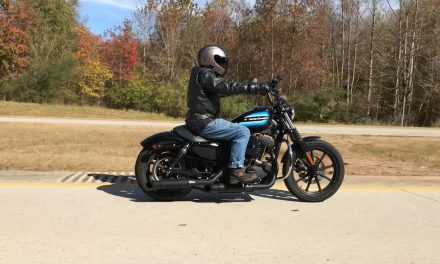 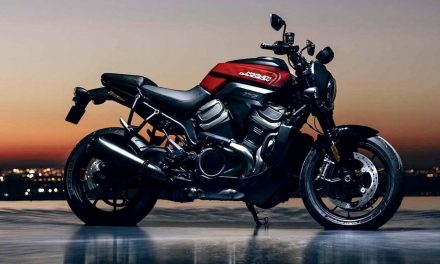 A Trip Back To The Bronx 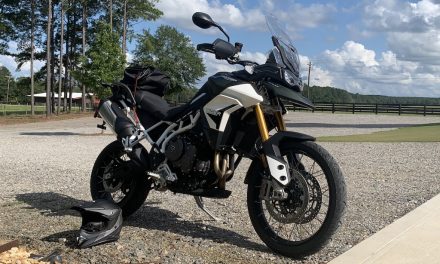 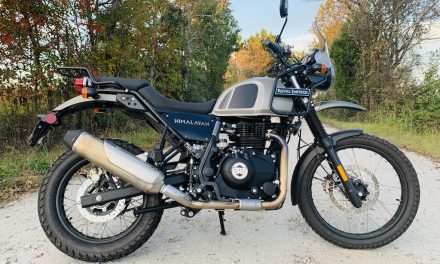