The Abernathy Boys- An American Chronicle 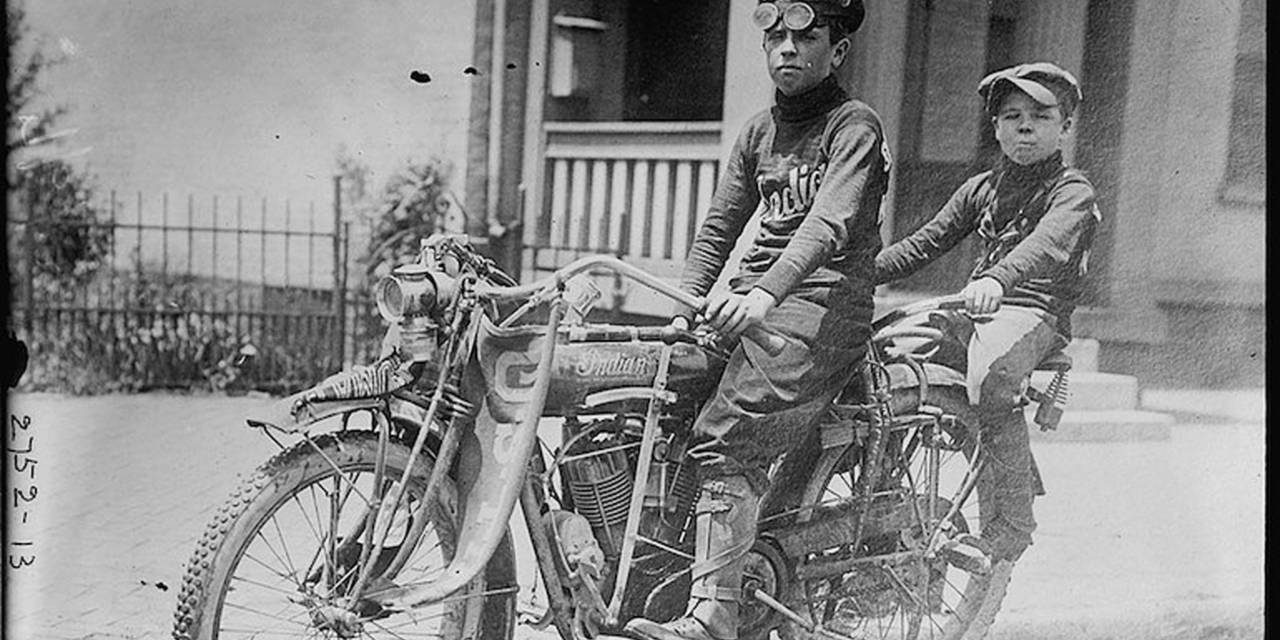 I first laid eyes on the photo of the “Abernathy Kids” when my father gave me a wooden framed print of it some 10 years ago for my basement “man cave”. He knew a little of the backstory which he shared with me, and I placed the picture and frame among some of my other vintage and antique paraphernalia downstairs, where it remained for a decade. When we transferred my “motorcycle works” to a new outdoor garage, I thought the photo and frame would fit perfectly, so I set it among my other old stuff on the back pegboard.

The other night, as my wife was hanging out briefly with me in said garage, she saw the photo and asked about it. I recounted what I could remember my dad telling me about the boys, and she replied, “You should write a story about them for Road Dirt.” Dumbfounded that I’d never thought of that before, I set about researching their tale, and it turned out to be more fantastic than even Pops had shared with me years before. 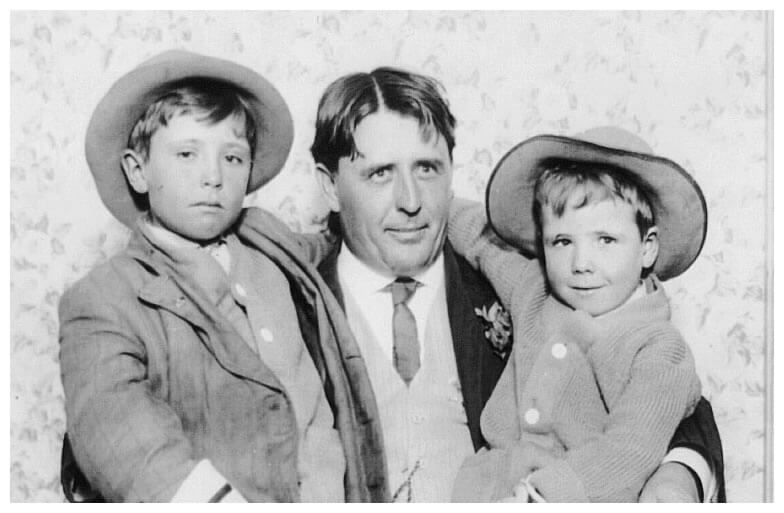 A proud Jack Abernathy and his boys Louis “Bud” (left) and Temple (right).

The boys names were Louis “Bud” and Temple Abernathy, sons of a famous U.S. marshal and sheriff named Jack “Catch-Em Alive” Abernathy. Born and raised in Guthrie, Oklahoma in the early 1900s, their mother died in 1907 after giving birth to the couple’s sixth child, and Jack raised the whole brood as a single father on their family ranch. Jack had been a soldier in Theodore Roosevelt’s “Rough Riders” unit in the Spanish-American War by some accounts, and the two remained friends, staying in contact in the years following the war. Known for his toughness and bravado, Jack earned the nickname “Catch-Em Alive” for not only his track record of apprehending criminals as an agent of the law, but also for his unusual ability of catching wolves and coyotes alive that preyed on local livestock. He apparently was paid handsomely by regional ranchers for his unique skill set. 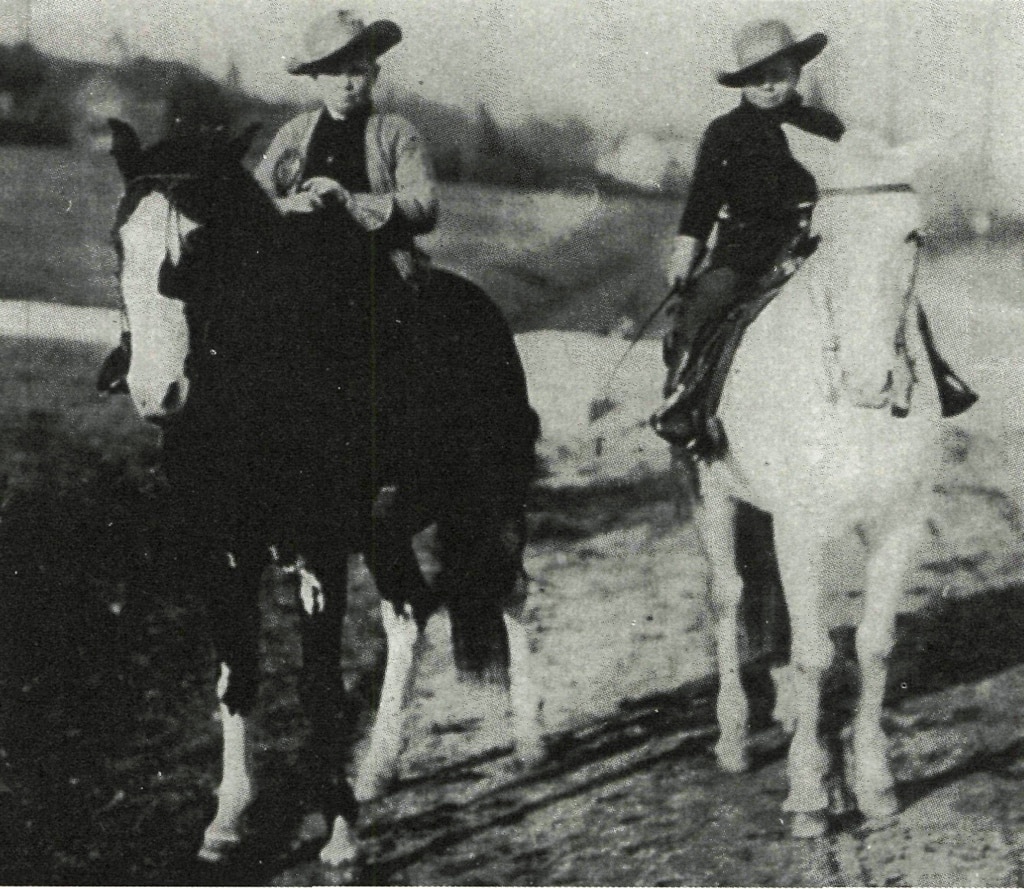 Bud and Temple astride their steeds Geronimo (left) and Sam (right).

Life on a ranch in Oklahoma in the early years of the 20th century was hardscrabble, and Jack made sure his boys grew up strong and confident. The young brothers first adventure, approved and encouraged by their father as a way to “toughen up” the young lads, saw Bud and Temple ride their horses Geronimo and Sam from Guthrie, OK to Santa Fe, New Mexico in July of 1909. Alone. At ages 9 and 5, respectively. It was definitely different times back then. 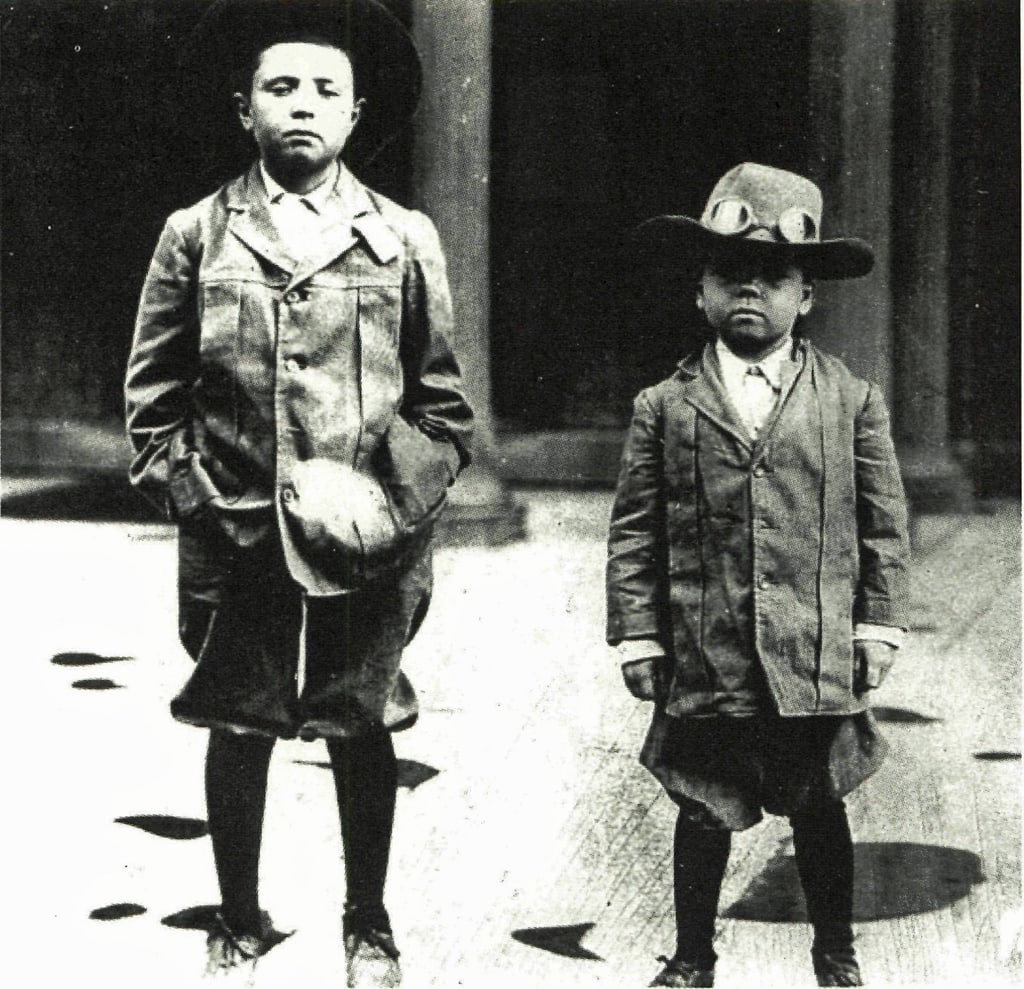 The intrepid youngsters next adventure saw them make a trip the very next year, from Guthrie to New York City astride their trusty steeds Geronimo and Sam again, this time amidst much newspaper coverage across the country. Upon arriving in NYC, they were welcomed by none other than Teddy Roosevelt himself and a crowd numbering in the thousands, lining the streets to see the “wonder kids”. If that were’t enough, the boys purchased a small Brush Motor Car with sponsorship and gift money, and they drove that car back home to Guthrie, OK, once again on their own. 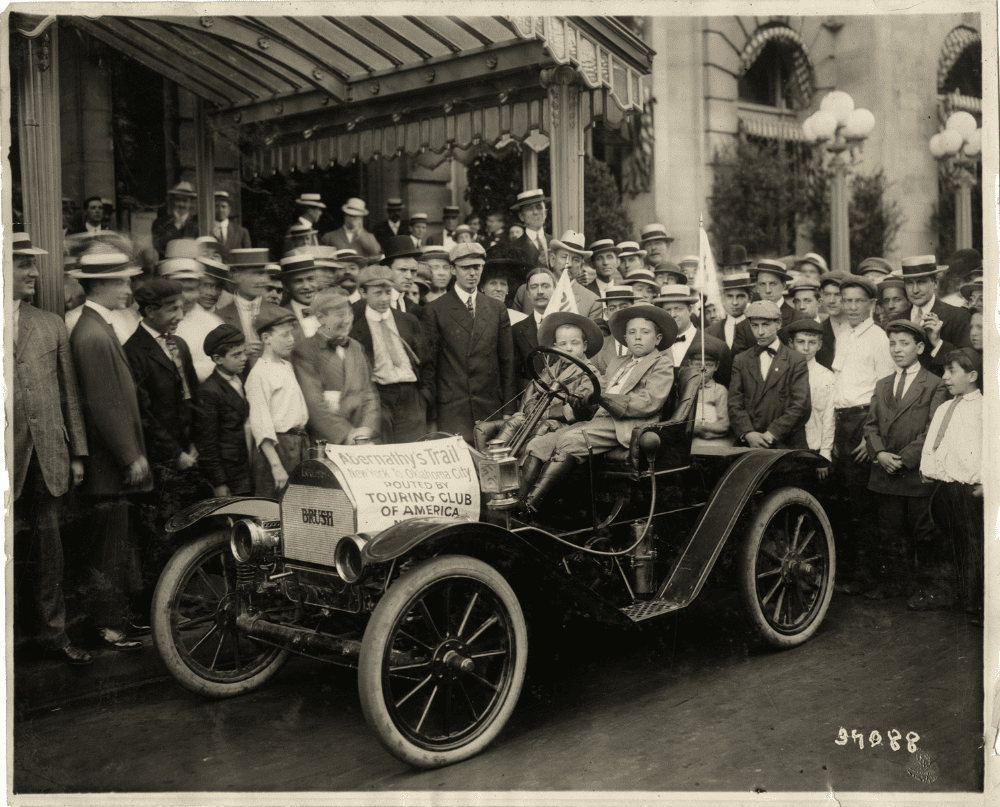 The Brush Motor Car they purchased and drove back from New York to Guthrie, OK.

In 1911, the now young celebrities accepted a challenge to ride their horses from New York City to San Fransisco in under 60 days. If they succeeded, they would receive a $10,000 prize. The catch: they were forbidden to eat or sleep indoors the entire trip. The boys rode Sam and Geronimo hard but missed the deadline by two days. Yet their quest had been so followed and popularized across the country via newspaper reports that they raised enough money to purchase a new Indian motorcycle, seen in the now iconic photo. 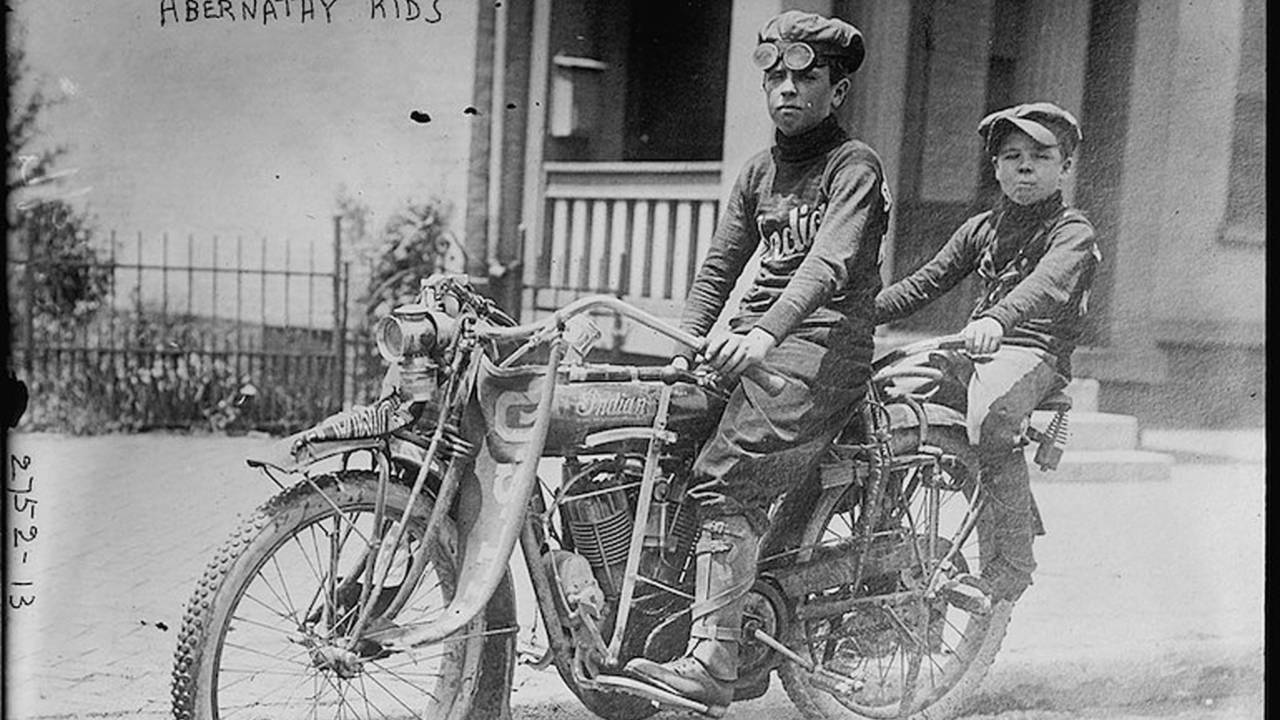 The famous photo of the brothers aboard their Indian 1000cc motorcycle.

Their Indian motorcycle appears to be a single speed 1000cc v-twin, worth about $250 back in its day, from what some sources have claimed. The bike had a leaf spring rear suspension, made about 7 hp, weighed about 355 lbs fully fueled, and rolled down the largely unpaved roads of its time at a top speed of 55 mph. The rear fender-mounted tandem seat with its own handlebars was apparently a popular accessory of the day, and in 1913, the boys took up another challenge: ride that motorcycle from Oklahoma back to New York City. The boys were accompanied by their stepbrother Anton (unsure how they managed that), with Bud being all of 14 and Temple aged 10. Upon reaching New York, after being hailed again nationwide for their adventure, the boys loaded up the bike and took a train home to Guthrie, their escapades concluded. It would be their last cross-country adventure. In all, the boys traversed over 12,000 miles back and forth across America, in an age before superhighways or even paved roads. 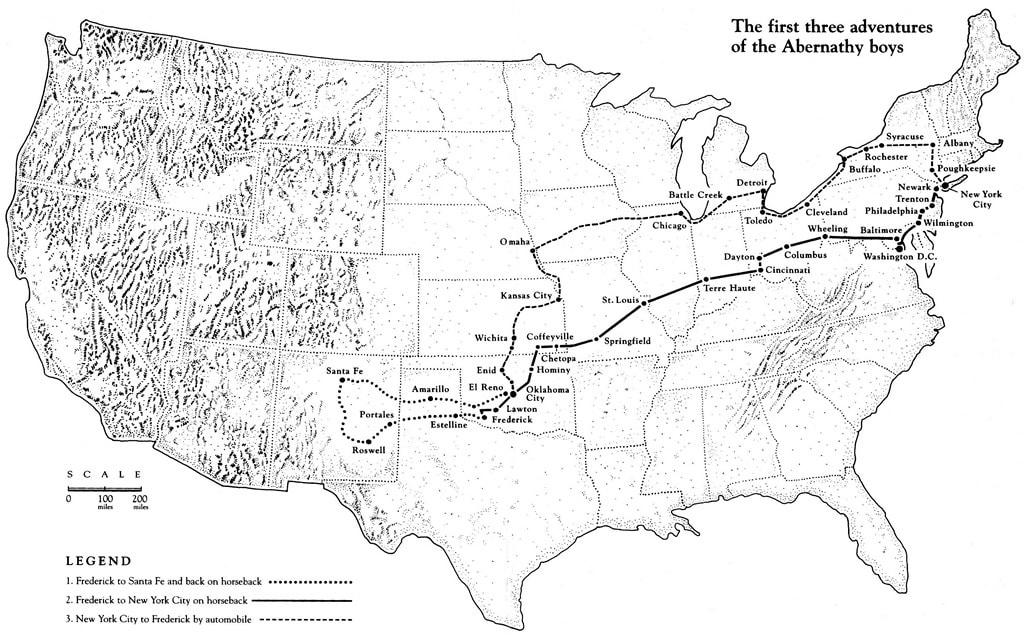 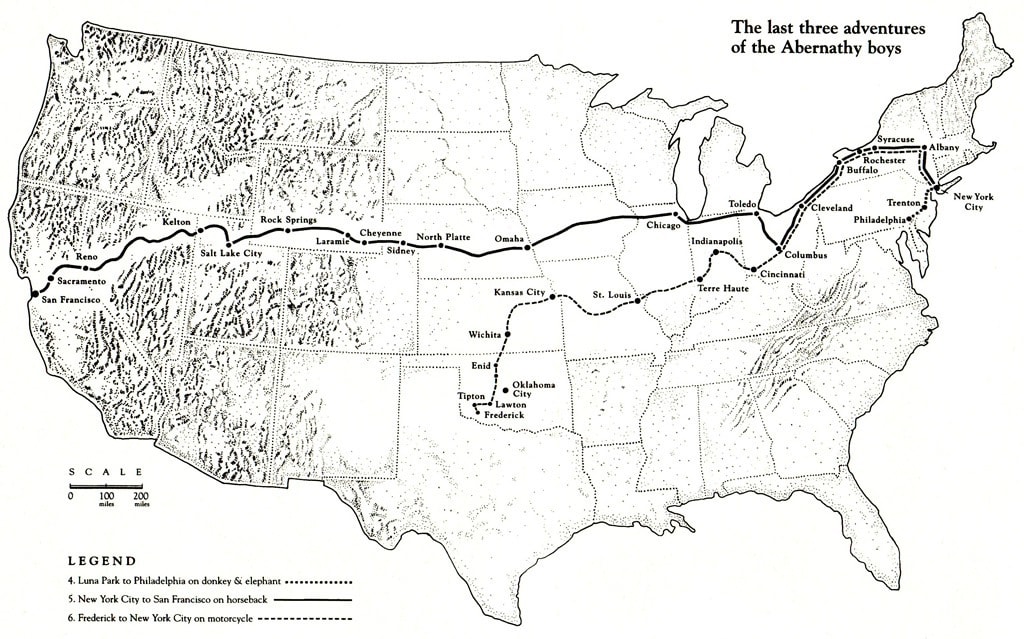 Jack eventually moved the family to Wichita Falls, Texas during the oil boom years, working as a “wildcatter” in the oil fields. Temple grew up to accompany his dad in the work. Louis “Bud” would go on to study law at the University of Oklahoma and practice law in Wichita Falls, Texas, later becoming a judge. Jack died in 1941, Bud passed away in 1979, and Temple died in 1986. Their story is the stuff of legend, from a time in American history that is long gone but never forgotten. May the tale of the Abernathy Kids live on in American lore.

For more on the Abernathy boys, visit their official website where you can find more photos, videos, information, books, and more:

*information sourced from the “Bud and Me” site, Indian Motorcycle, RideApart, and Riding Vintage. 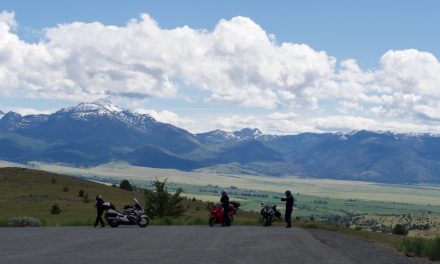 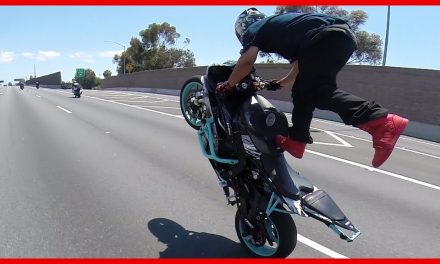 Anatomy of a Squid 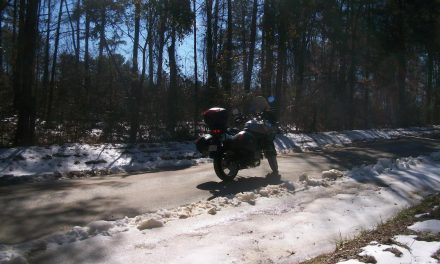 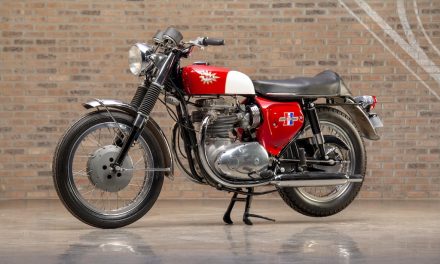