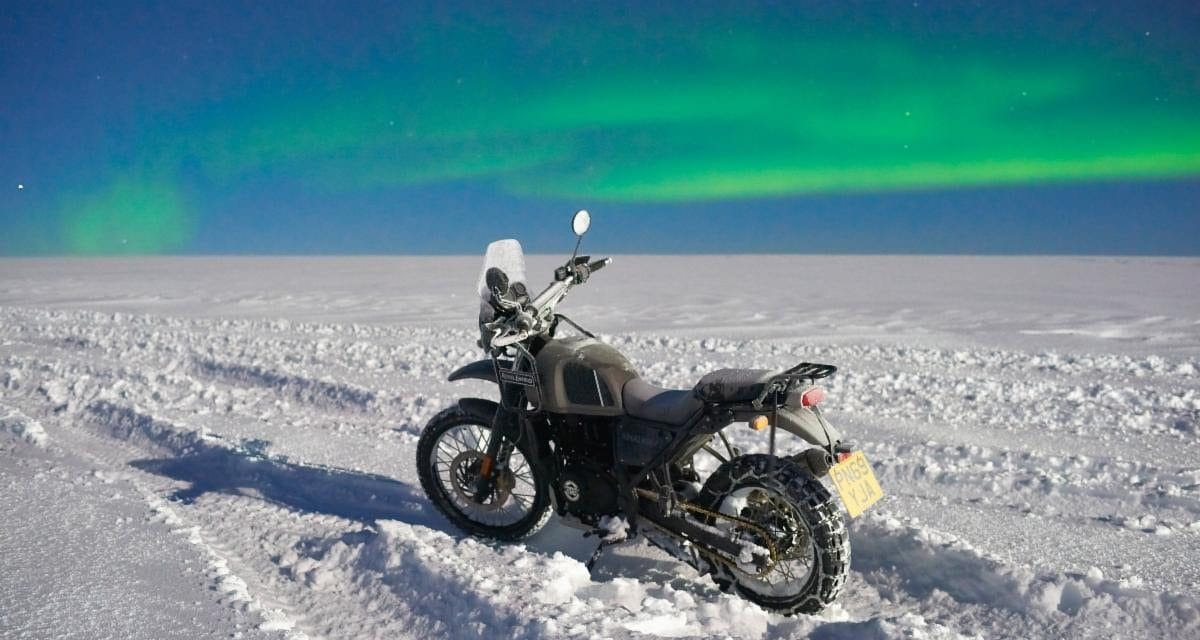 Royal Enfield is no stranger to adventure, and as a brand, has always been up for a challenge. Cases in point: their “Build. Train. Race.” program in flat track and road racing, and their factory entrance and surprising success in AMA American Flat Track racing. Now they take aim, not higher, but lower- as in leading an expedition to ride motorcycles to the geographic South Pole.

Here’s their announcement on it-

For 120 years, Royal Enfield has maintained the legacy of building simple, authentic motorcycles that are engaging and fun to ride. Riding through time and tough terrain since 1901, Royal Enfield has emerged victorious in excursions that test the endurance of man and machine. To commemorate 120 years of the pure motorcycling culture, Royal Enfield will take on yet another ambitious endeavor—a first-of-its-kind motorcycle expedition that will attempt to reach the geographic South Pole. 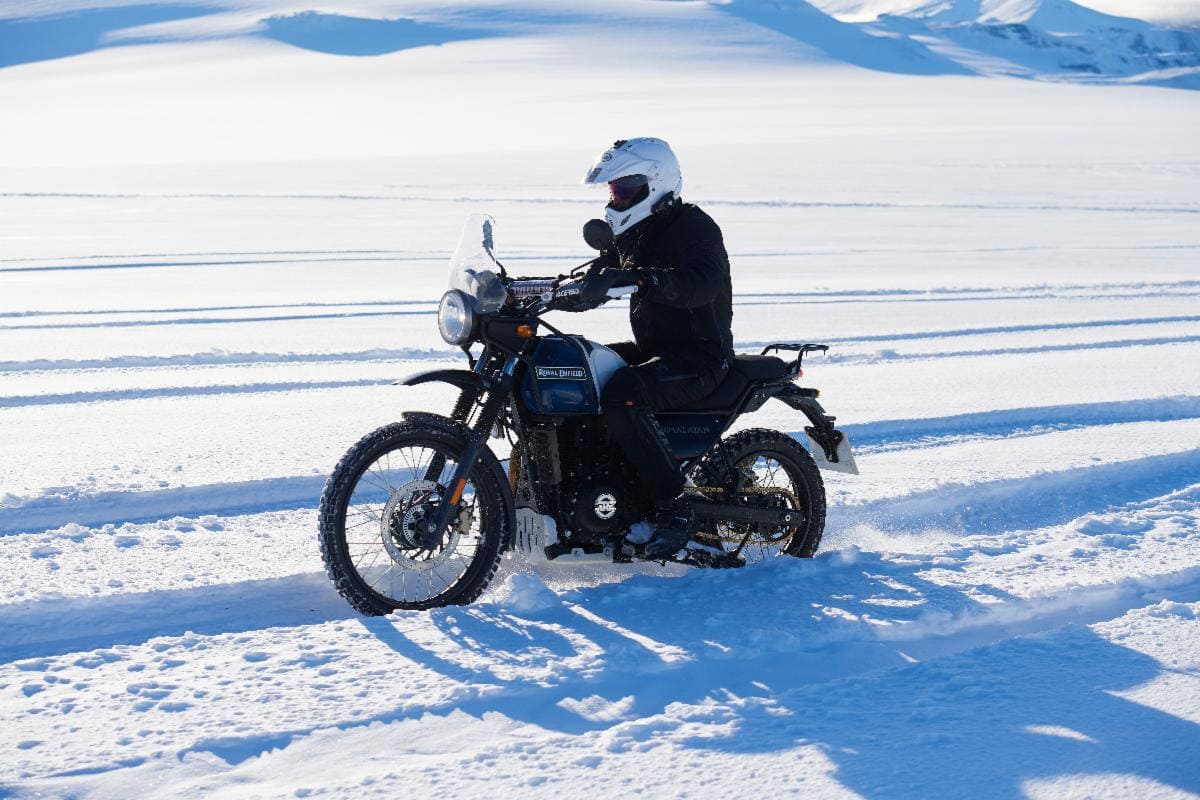 Two Royal Enfield riders will undertake a 39-day expedition traversing Antarctica on a 478-mile ride from Ross Ice Shelf to the South Pole, on expedition-ready Himalayans. Photo by Royal Enfield.

90° SOUTH – Quest for the Pole serves as a tribute to the brand’s commitment to pure motorcycling, and to the courage and fortitude of explorers who have made history on two wheels. In this ambitious attempt to push the boundaries of motorcycling possibilities, two Royal Enfield riders will undertake a 39-day trek across Antarctica on a 478-mile (770 km) ride from the Ross Ice Shelf via the Leverette Glacier on expedition-ready Royal Enfield Himalayans. The journey is to commence on November 26, 2021, beginning in Cape Town, South Africa. The expedition will witness two Royal Enfield riders—Santhosh Vijay Kumar, Lead – Rides & Community, Royal Enfield; and Dean Coxson, Senior Engineer – Product Development, Royal Enfield—attempting to reach the geographic South Pole to the Amundsen-Scott Pole station.
“Over the last 120 years, we have created and nurtured a thriving culture of riding and exploration around the world,” said Siddhartha Lal, Managing Director of Eicher Motors Ltd. “This pursuit of exploration has been a quintessential part of our DNA, and 90° South – Quest for the Pole is another chapter in our series of extraordinary, epic motorcycling rides. In the past, rides like Himalayan Odyssey have paved the way for motorcycling adventure in the Himalayas and an epic expedition like this to the South Pole will once again inspire people to become adventurers. A test of endurance and perseverance for man and machine, this expedition is the first of its kind attempt to traverse the 478-mile (770 km) route to the South Pole on a motorcycle.” 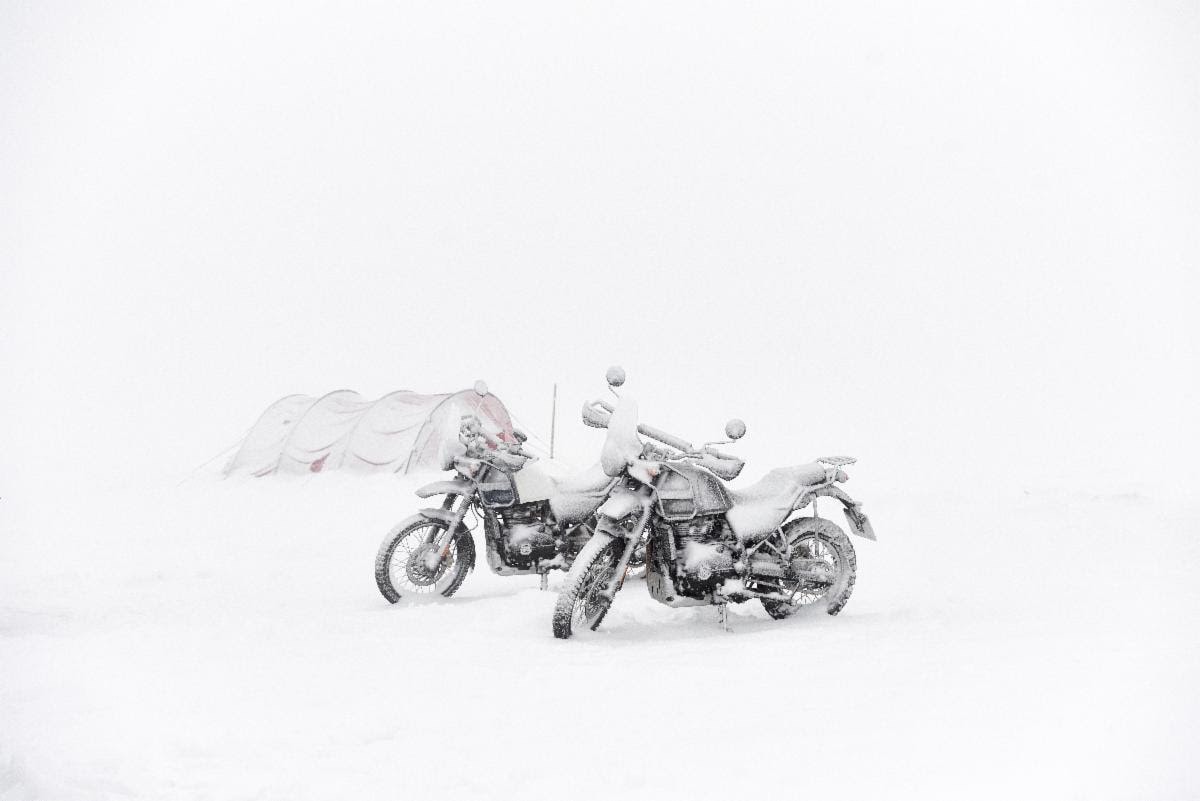 Following two phases of testing in Langjokull glacier in Iceland, the 90° South – Quest for the Pole will commence on November 26, 2021. Photo by Royal Enfield.
Speaking about the brand’s initiative to encourage explorations, and wishing the expedition great success, B Govindarajan, Executive Director, Royal Enfield remarked, “It has been an unbroken legacy of 120 years, of fueling and pushing the boundaries of human exploration, and being an ally to many explorers. It is their journeys and adventures that have inspired us to attempt this first of its kind motorcycle expedition. This bold and ambitious attempt to ride to the very end of the earth illustrates the resilience of the human spirit, and we hope to complete it successfully as an ode to all Royal Enfield riders, and to inspire their own expeditions.”
To be conducted in close partnership with Arctic Trucks, 90° South – Quest for the Pole will be attempted on two, purpose-built Royal Enfield Himalayans. Arctic Trucks, a member of the International Association of Antarctica Tour Operators, are renowned for their expertise in the field and have covered over 350,000 km on the Antarctic Plateau. They have supported and serviced several scientific expeditions and activities, as well as commercial and NGO expeditions in the past. 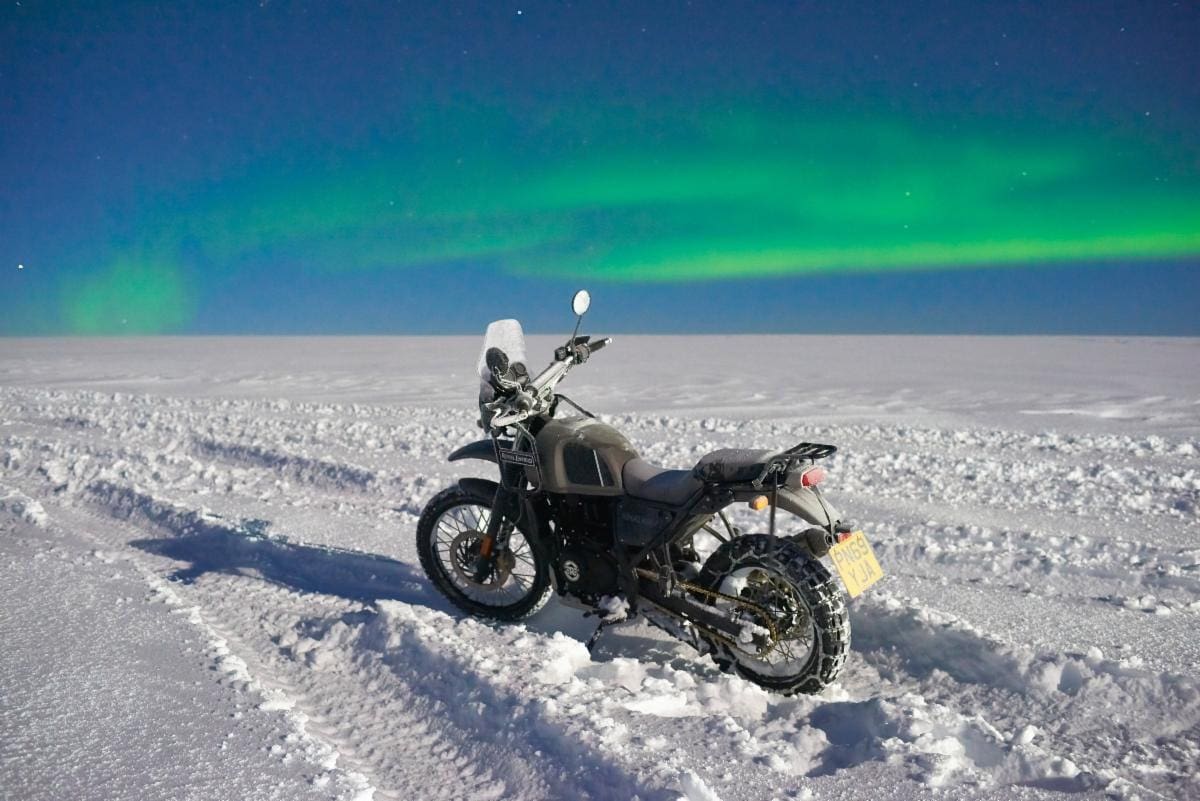 The Royal Enfield Himalayan tests amidst the stark beauty of Iceland, and the breathtaking Aurora Borealis. Photo by Royal Enfield.
HIMALAYANS BUILT FOR ANTARCTICA
For this expedition, two Himalayans have been modified in-house, with functional upgrades to be able to navigate snow and ice and function under the extreme Antarctic conditions. The Himalayan was tested for this arduous journey at the Langjokull glacier in Iceland, with an intent to mirror the conditions in Antarctica. Phase 1 of testing was held in September 2020 while phase 2 testing concluded in July 2021.
Minimal changes have been made to the Himalayan motorcycles to make them ready for the terrain and weather conditions in Antarctica. For greater torque at the rear wheel, the countershaft sprocket has been changed from a 15- to a 13-tooth unit. A tubeless wheel setup with studded tires will allow the tires to run at very low pressures, and to increase floatation on soft snow while also providing adequate traction on hard ice. The team has introduced a stronger alternator using rare earth magnets, enabling the Himayalans to produce more current and enable the team to run heated gear off the battery. 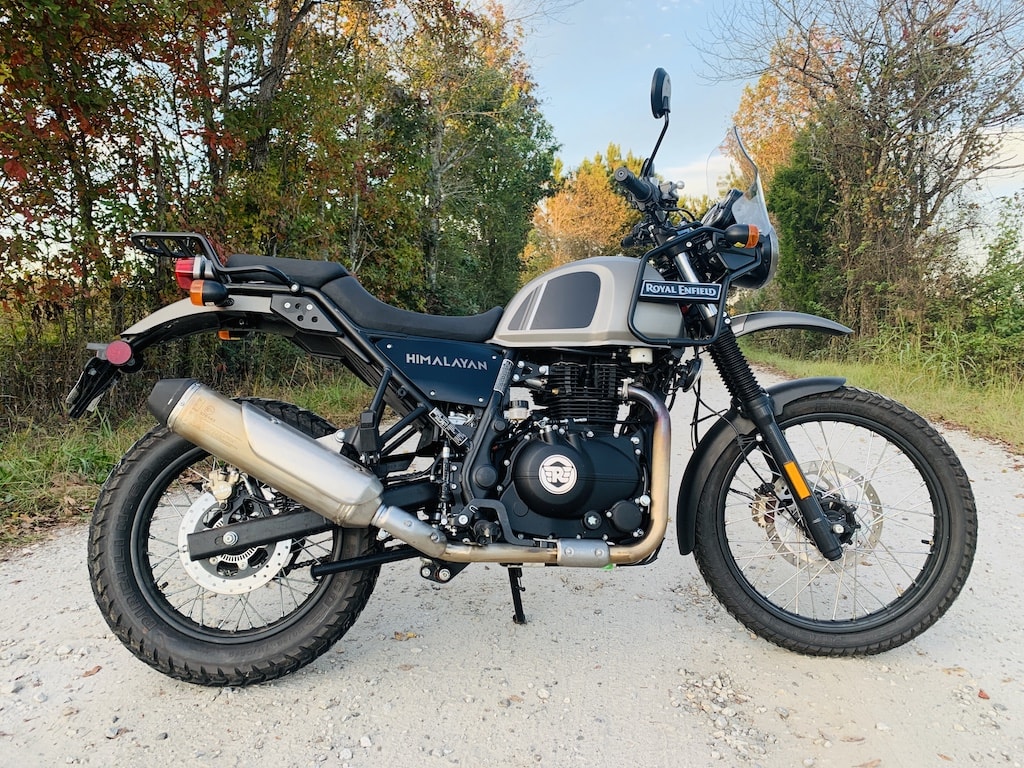 The Royal Enfield Himalayan we had last fall. Incredibly capable motorcycles.
Launched in 2016, the Royal Enfield Himalayan is a simple, extremely capable, go-anywhere motorcycle. Inspired from the experience of decades of riding in the Himalayas, and traversing thousands of kilometers of challenging terrain, the Royal Enfield Himalayan was built to be a versatile motorcycle that is capable on the road, as well as off the beaten track. The Himalayan has been a trusted ally for many adventure seekers around the world.
The motorcycles will be ridden on a compacted snow track from the Ross Ice Shelf to the South Pole, to reduce motorcycle drag and limit emissions to an absolute minimum. Royal Enfield is consciously ensuring no footprint is left behind by the expedition team except wheel tracks that will quickly be lost to snow drift. In line with our #LeaveEveryPlaceBetter initiative, the team will ensure all waste including human waste is brought back for appropriate disposal.
We at Road Dirt are enthused to see this ambitious undertaking by the legendary motorcycle brand, and wish them the very best of success. We look forward to keeping up with the prep and expedition progress, and will report on it as we have information.
Check out this video preview of the endeavor they sent us- 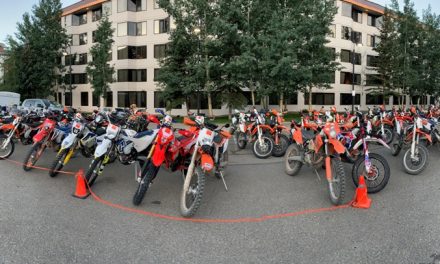 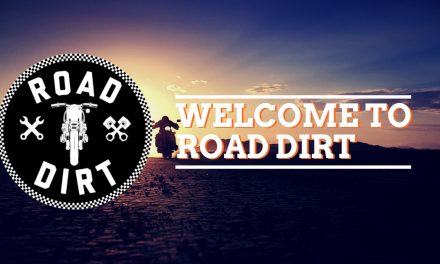 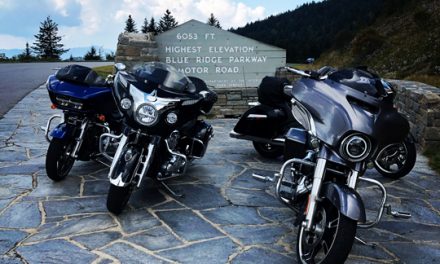 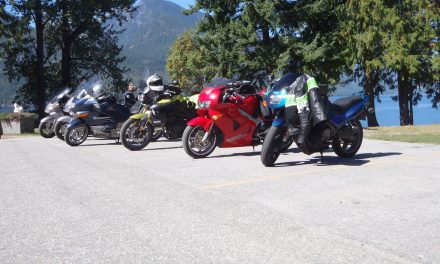