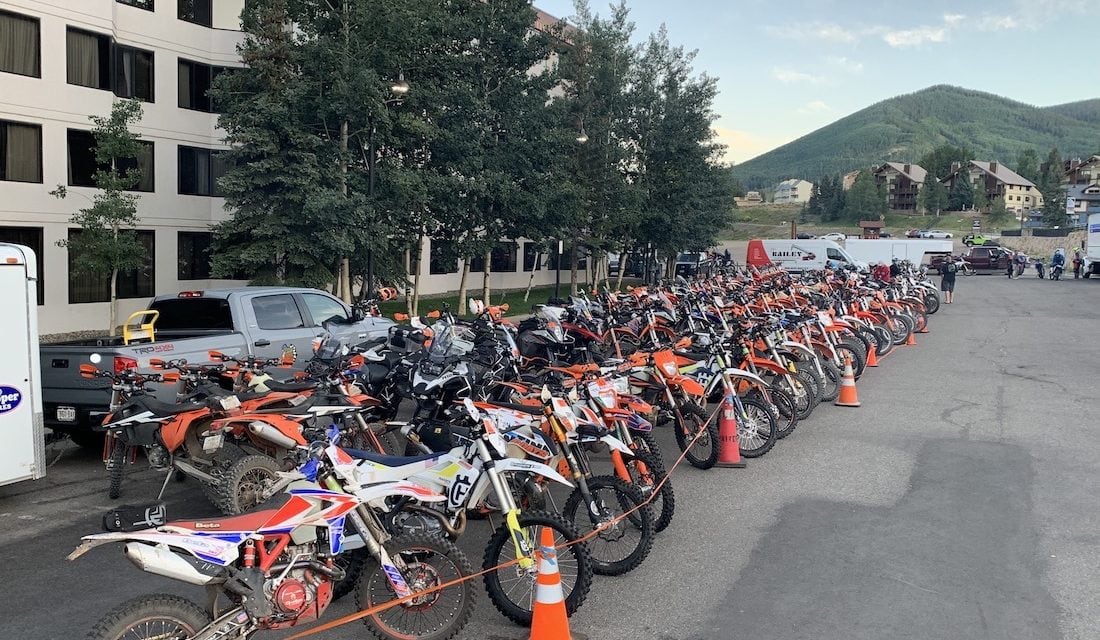 Racing Legends Ride To Give Back

“When do you guys race?” Jackie asked.

I tried yet one more time to explain to Jackie, a stranger I just met who was on vacation in Vail, Colorado, the purpose of the Colorado 500.

“Think of it like this,” I started. “Imagine a huge family where everyone rides motorcycles and donates money to help surrounding communities and send kids to college.”

In the 1970s, Indy car racer Wally Dallenbach took his winnings from the California 500 and bought a ranch near the Fryingpan River in Colorado.  In 1975 he explored the mountains and mining ghost towns around his ranch on his motorcycle with his son Wally Jr. and friend Sherm Cooper.  They loved the trails so much that the next year they invited friends Dick Singer, Art Lamey, Lon Bromley, Del Garner, Ed Kretz, Al Unser and Bobby Unser.  That first ride in 1976 needed a name and being Indy 500 veterans, the group named it the Colorado 500. 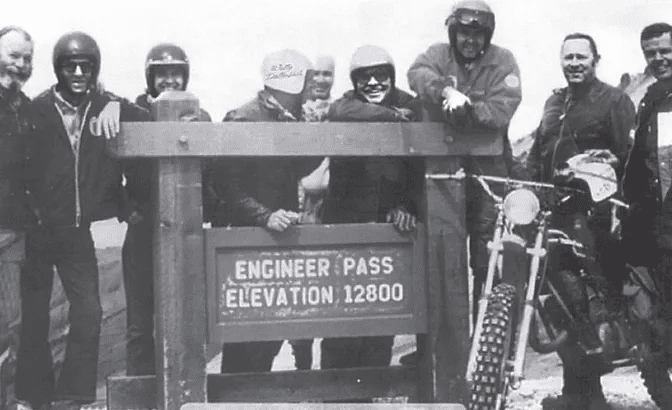 A few years later, Wally and Peppy Dallenbach’s daughter was attending nearby Basalt High School and when the riders learned the school’s cheerleaders needed new uniforms, the rider’s opened their wallets and gave.  Thus began a long tradition of giving generously, showing that this famous group of racers exploring Colorado on their dirt bikes were the good guys of the sport.

Decades later the Colorado 500 organization has grown in size and generosity.  Since 1981 over $2.6 million dollars has been raised for college scholarships, first responders, trail preservation and countless more organizations throughout western Colorado.  However, the fund raising and scholarships are only the beginning of the story.

“It’s amazing how many schools and programs we support,” said Janet Lohman, president of the Colorado 500.  “It just keeps growing each year.  You know you are doing something so good, giving back and influencing people to do good.  It’s the connections, the friendships and the love of riding motorcycles.  There are so many people that keep coming back for ten, twenty or thirty years,” Janet explained.  “Its the same with the volunteers.  It’s amazing.”

The riders of the Colorado 500 impact lives everywhere they go.

“My whole childhood was the C500,” said Shawn Stevenson, the first scholarship recipient in 1993.  “As a child, going to Basalt schools, the C500 would ride around our track every first week of school.  It was tradition.  It was the one thing that made me look forward to starting school.  We would go the bleachers and stomp the bleachers.  Wally Dallenbach and his sons Wally Jr. and Paul would all ride.  They would rev their engines and go around and do wheelies and spray dirt everywhere.” 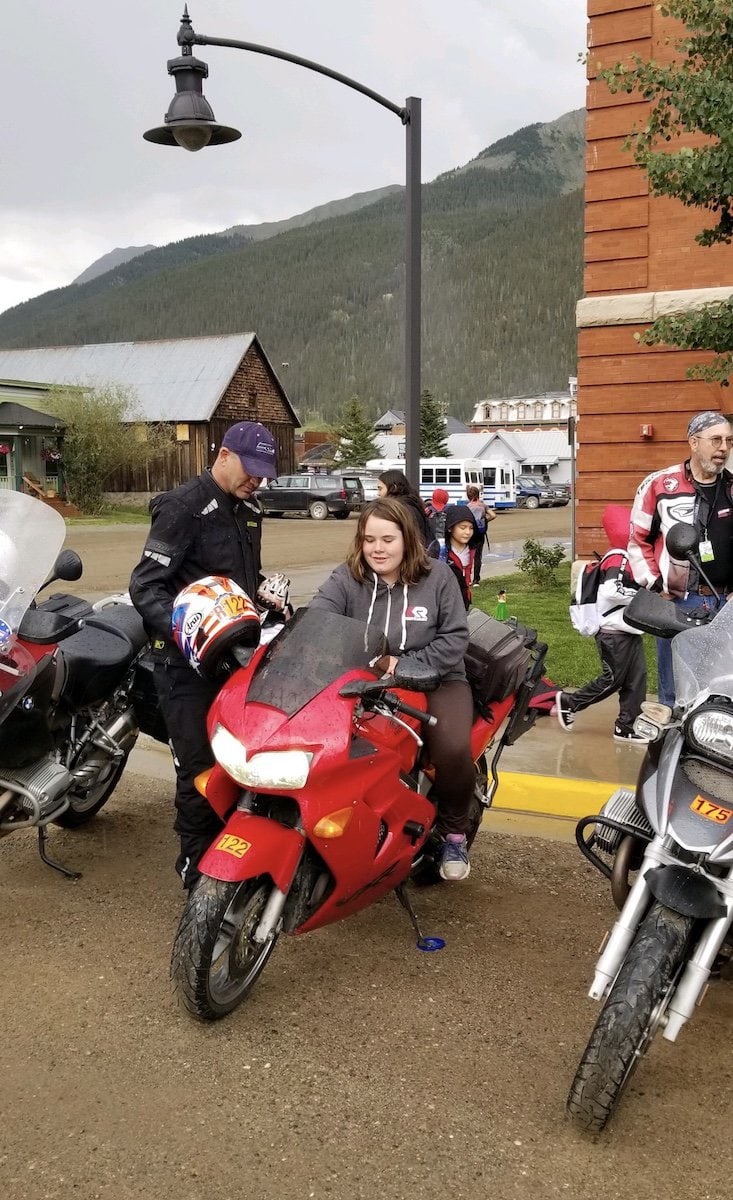 The author letting one of the Silverton School students sit on his Honda VFR800.

In time, the Colorado 500 would change the course of Shawn’s life.

“It’s not just a check,” she said, “it’s admittance into the family.”

“The formula for what they look for started with me,” Shawn said.  “The scholarship is a big deal, a big dollar amount, prestigious.  I didn’t understand it fully back then, but when I won I knew it was a big deal.  It was ‘Oh my God, now I have a chance.’  I knew they really wanted me around.  There was a lot of attention on me.  I was told they unanimously voted for me because what they decided was to make the scholarship about a student that needed a little nudge.  Peppy Dallenbach has said for years that they have been looking for another Shawn, not someone who just takes the money and is never heard from again.”

Janet Lohman put it succinctly.  “It’s not just a check,” she said, “it’s admittance into the family.”

After receiving her scholarship, Shawn attended Fort Lewis College in Durango.  “I would be driving to college,” she said, “and the Colorado 500 riders would pass my car.  I would make sure that I had a new, shiny Colorado 500 sticker on my car so as they rode past they would see that I was a part of them.  It was so special, so emotional.  I’m like, ‘you guys are the reason I am in this car driving down this road right now.’ ”

The support of Wally, Peppy and the entire Colorado 500 community didn’t end there. 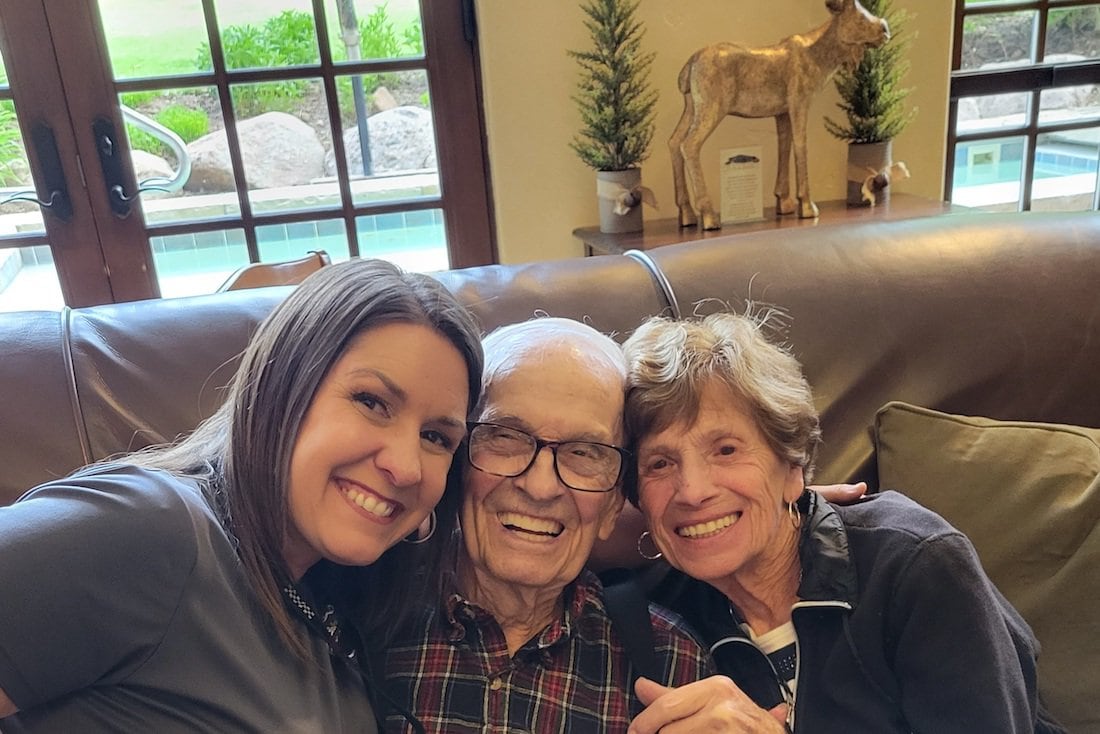 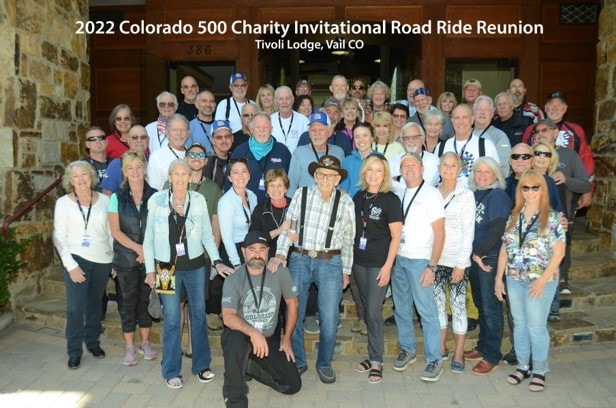 I was shy, so it was complete terror going to college for the first time,” Shawn explained.  “College was a hard time and I didn’t know if I could do it.  Steve (then president of the C500) would call and check on me.  I would share with him that part of me wanted to go home.  He told Wally, Peppy and some of the riders.  Hutch Collier (currently on the board of directors) and his wife Dawn wrote me a letter saying how much they remembered being in that situation and that they supported me.  When I read it I started crying, of course.”

“If not for the Colorado 500, my life would be totally different.”

Shawn felt their support throughout college.  “I thought ‘I can’t let these people down.’  They cared about my success and I needed someone to tell me to not give up.  They were the reason I stayed in college.  If not for the Colorado 500, my life would be totally different.  I graduated with a degree in psychology and used my degree and my skills to give back to the Colorado community by working in child welfare.  If not for the Colorado 500, I would have been in poverty, not educated.”

Shawn has returned to speak and volunteer at every Colorado 500 since getting her scholarship in 1993.

“I am on the scholarship committee now.” 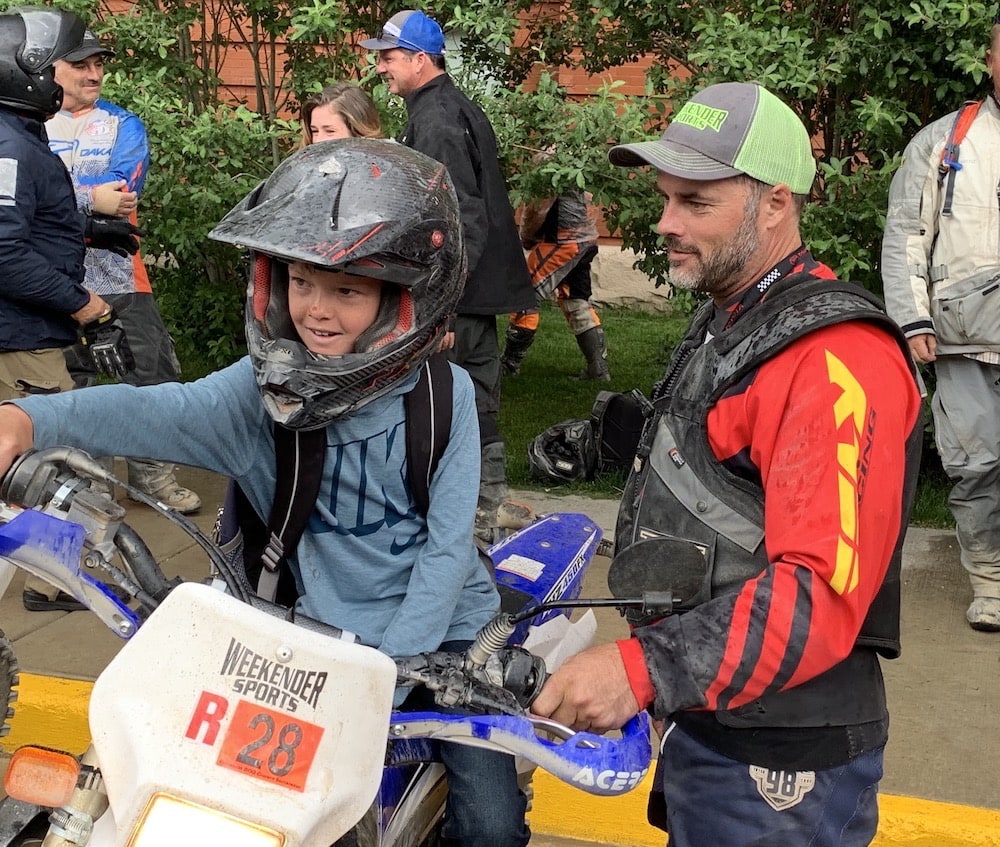 Could he be a future Colorado 500 scholarship recipient? Maybe.

Colorado 500 president Janet Lohman sees it he same way.  “It touches my soul that scholarship recipients return to give back,” Janet said.  “We become good friends.”

This August the Colorado 500 will hold its 46th annual ride, leaving a trail of dirt, mud and changed lives wherever it goes.  Seeing the students of Silverton School applaud and their teacher cry because they can now afford swim lessons is the Colorado 500 moment I will cherish forever.  Through this moment and countless others, I have built lifelong friendships with participants, although I still blame Bubba Schobert for stealing what was left of my travel money with the silly board game he invented.  Lesson learned, Bubba is as dominant at board games as he is on the bike.

Relationships is what the Colorado 500 is all about.

Then again, maybe it is a race, not a motorcycle race towards a checkered flag, but a race to give, a race to help and a race to change lives before they take a regrettable turn.  Shawn summarized it well.

“It’s a huge part of my story that the Colorado 500 saved not just my future, but possibly my life.” 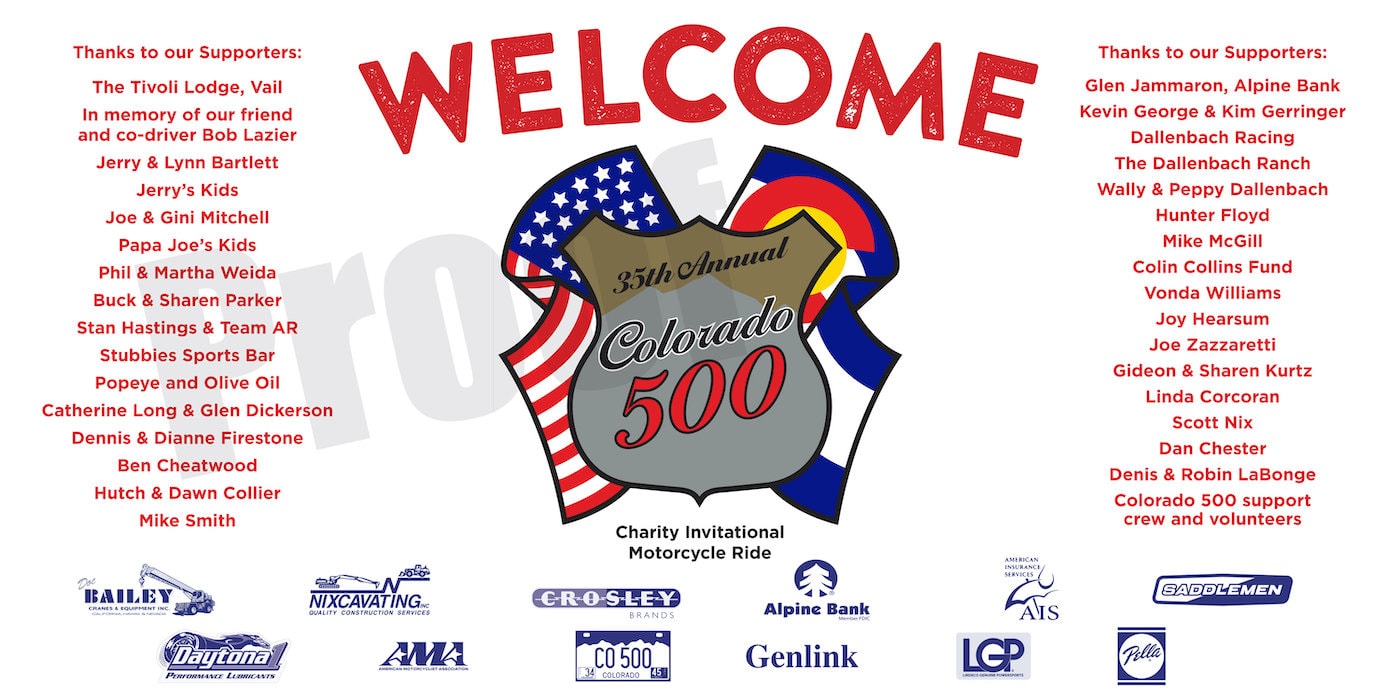 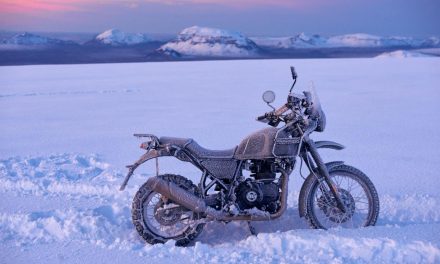 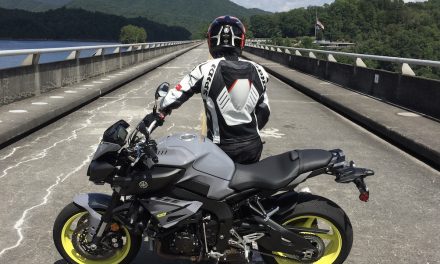 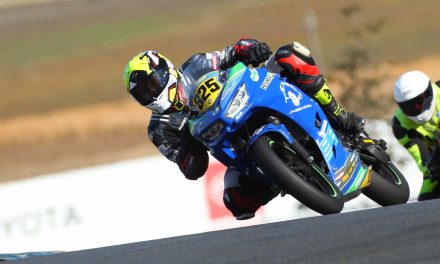 A Weekend Of Speed At Sonoma 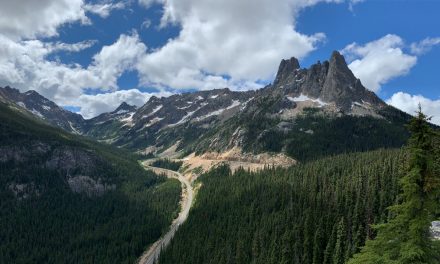