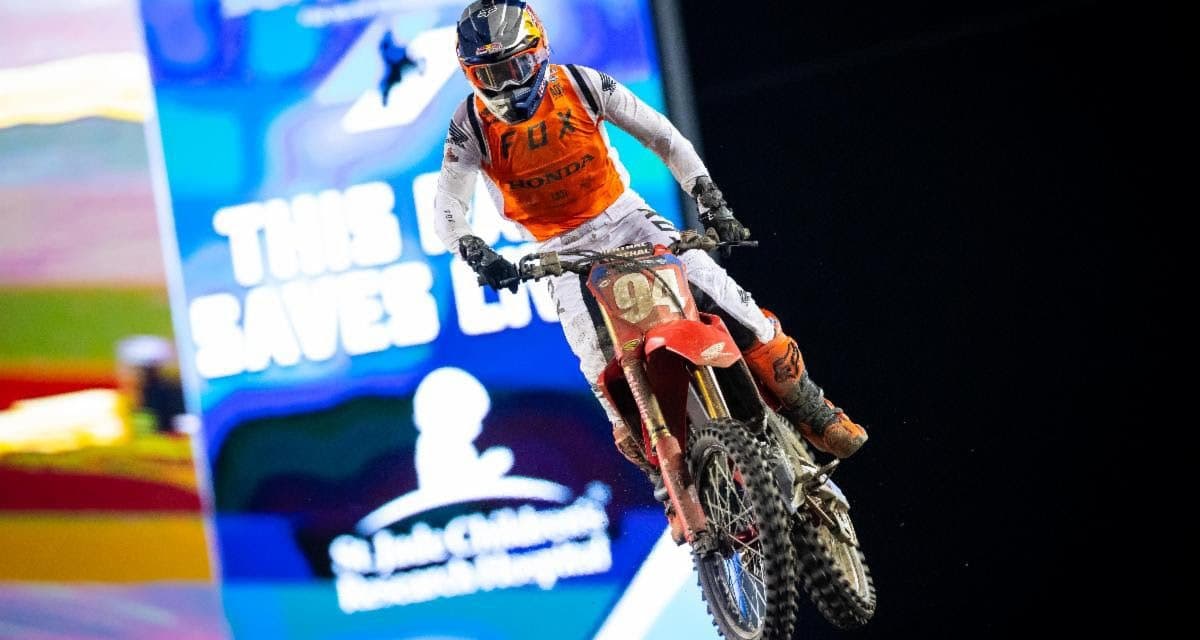 We love what Supercross is doing with the St. Jude Children’s Research Hospital 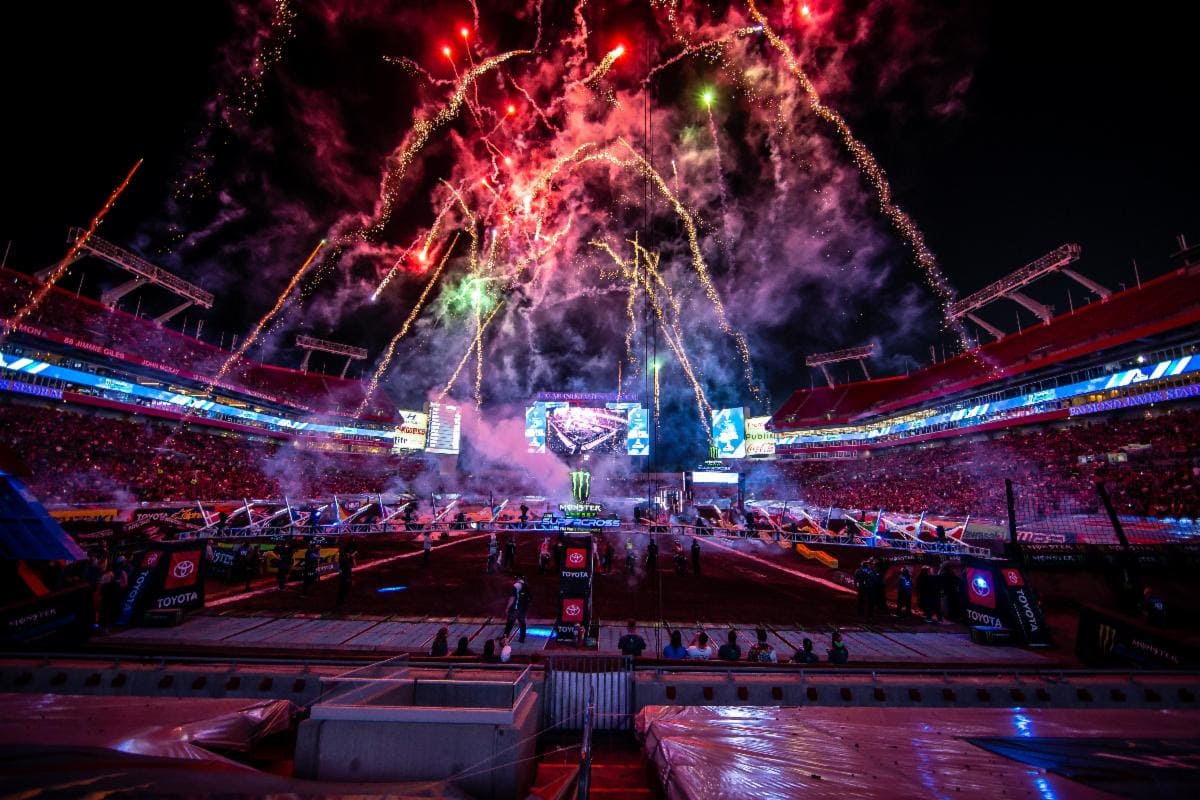 Smarttop/BullFrog Spas/Motoconcepts Honda’s Vince Friese crossed the holeshot line first but before the second corner Monster Energy Kawasaki’s Adam Cianciarulo sailed past. Team Honda HRC’s Ken Roczen, the points leader going into this round, was buried in the pack; last weekend’s winner, Cooper Webb of the Red Bull KTM team ran just outside the top five at the holeshot line. The racers on the move early trying to chase down Cianciarulo were Tomac, Malcolm Stewart, Webb and Roczen who’d made his way to fifth after five minutes of racing. 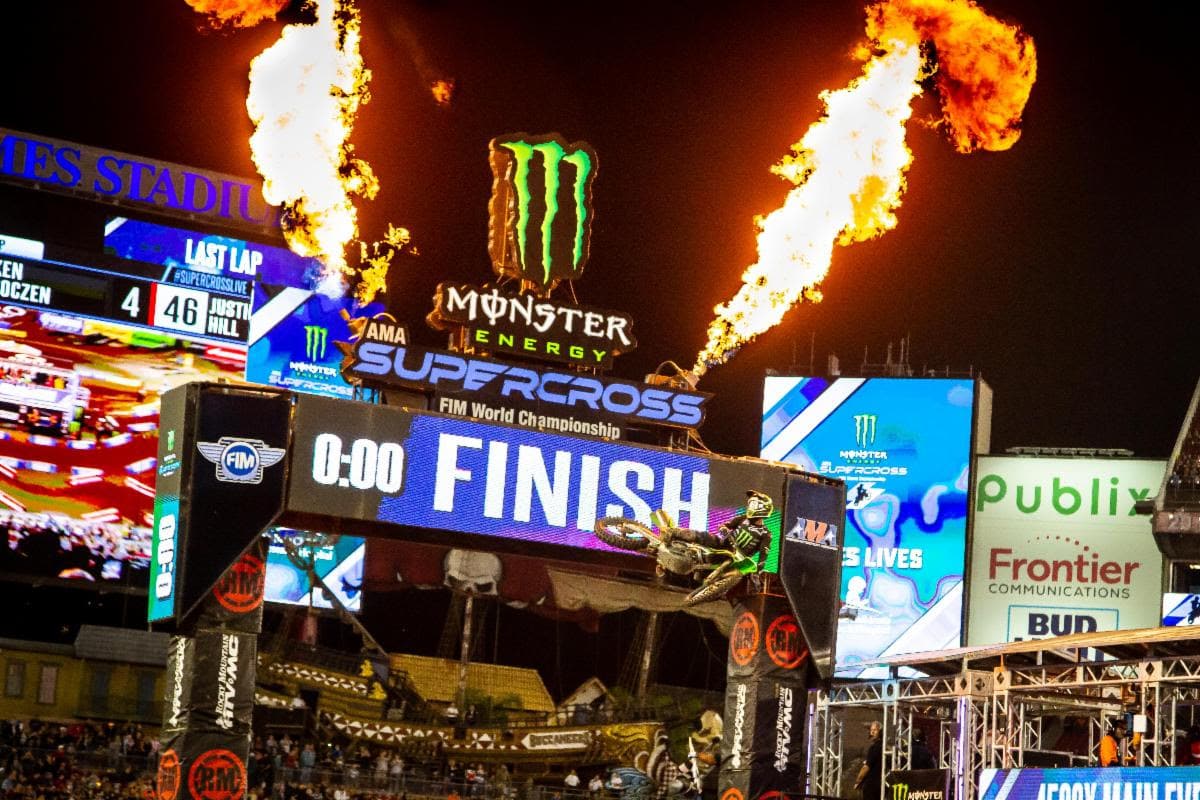 Eli Tomac was fast all day. He rode a composed race on a treacherous track to grab his third win of the season and take over the championship points lead. Photo Credit: Feld Entertainment, Inc.

The track was slick in areas with a challenging sand section, and Tomac used the split lanes in the sand to rail an outside berm and take the lead away from Cianciarulo on Lap eleven. With just over eight minutes and one lap of racing left, Webb jumped past Stewart into third. Roczen was by Stewart next, but a tip over allowed Stewart by at about the same time that Cianciarulo crashed in the whoops, dropping from second to tenth. Roczen made it back around Stewart and the top three riders in points held onto the podium positions. 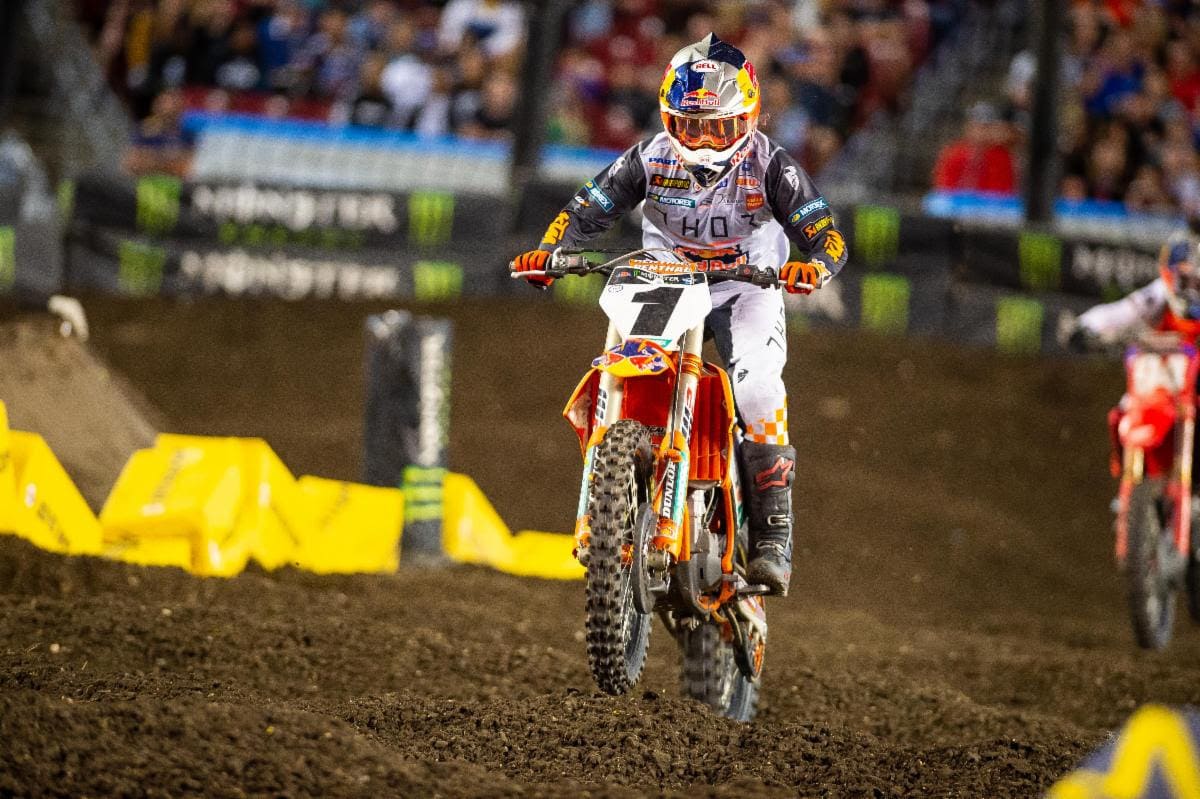 After the race Tomac was feeling good- “Early on, [I] was just following Adam. With these short lap times I knew we had a lot of laps under our belts tonight, so kinda just settled for a while then made the push just before half way. I’m like, alright gotta go if I’m gonna go,’ you know? So [I] was able to do that, switched up the sand there. That ended up working out really cool tonight with the option there, a good passing spot. The motorcycle was just awesome the whole day, so man this feels good.”

On the podium, Webb pointed out how the sand section could work against riders, “When we have this sand section it just makes it super hard to see, so when you’re kinda behind someone you lose a bunch of time just simply not being able to see. So, it made it tough when you’re behind, but once I got around Malcolm around half way, really tried to put my head down. Eli was already pretty much checked out so I’m happy with a second. Obviously wanted to be up there for that win tonight, felt great all day but its’ a good night overall. I felt like I rode good and just need to be better on my starts.”

“The motorcycle was just awesome the whole day, so man this (win) feels good.”

Roczen made a lot of passes in the Main Event and seemed to like the track. “The rhythm sections weren’t too technical but the sand, obviously it being beach sand it’s super deep and there’s not really a true line forming through there so we’re swapping lanes all over the place. But that was fun. The whoops were tough, really rough. Overall though I’m just happy to be back on the podium. Struggled with my starts the last couple weekends, just trying to keep a cool head now and get those [starts] back dialed and put myself in a good position.” When asked specifically about losing the red plate, he said, “It’s only four points behind, you know, like you said. A lot of things can happen, and we’ve just got to work on our starts again and get those dialed, at the same time not freak out. Sometimes when you over train then you start going backwards. So just trying to keep it cool and go out there and have fun.” 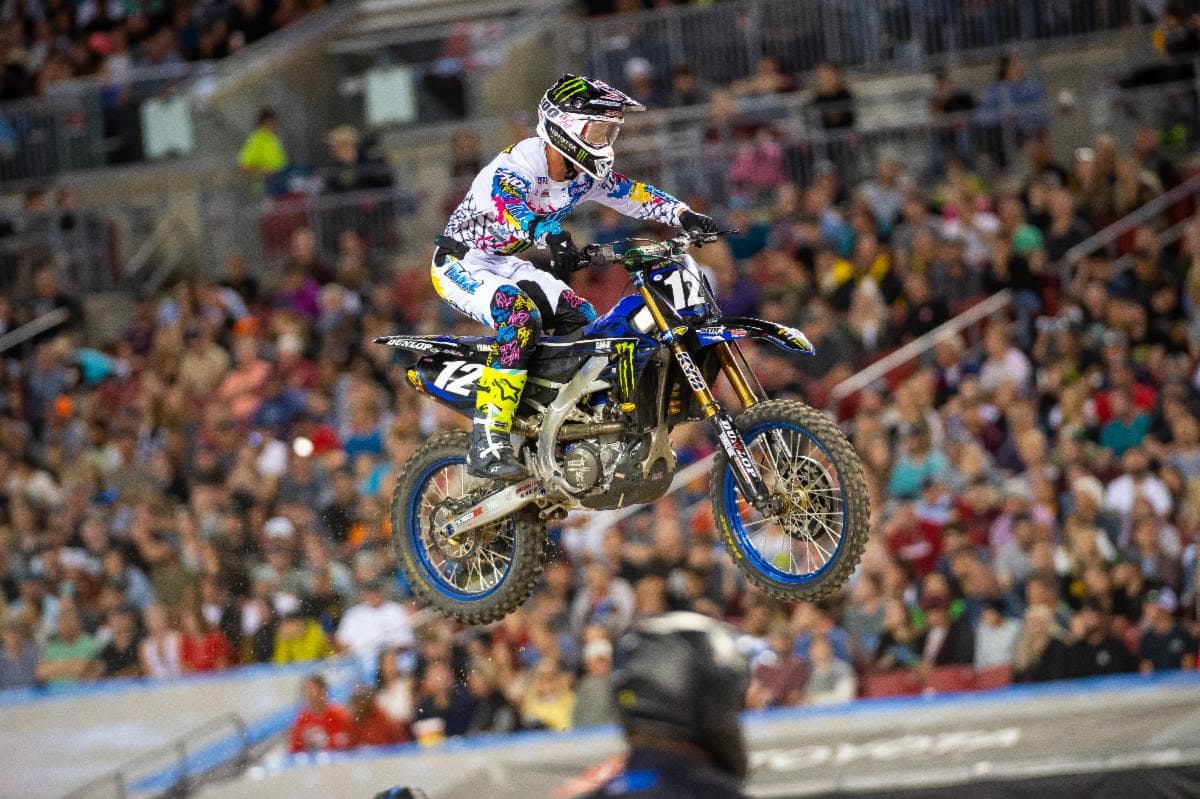 Shane McElrath had the field handled at the opening round of the Eastern Regional 250SX Class series. Photo Credit: Feld Entertainment, Inc.

Also establishing a new points leader, by virtue of it being the starting round of the Eastern Regional 250SX Class series, Monster Energy/Star Yamaha Racing’s Shane McElrath took an impressive win, leading the pack nearly from the start. It was Monster Energy Pro Circuit Kawasaki’s Jordon Smith who jumped out with the holeshot, but McElrath was into the lead before the second corner. From there, McElrath checked out, pulling three seconds ahead of the pack in just the first minute and a half of racing. By then GEICO Honda’s Jeremy Martin, in his first race back after missing all of last season due to a back injury incurred in the summer of 2018, was into second and looking ahead toward the lead. Instead, Martin was attacked from behind by teammate and defending champion Chase Sexton. After a short battle where the two Honda’s traded the position a few times, Sexton got clear but by then was facing a nearly six second gap to first. Rockstar Energy Husqvarna Factory Racing’s RJ Hampshire battled his way from seventh up to as high as fourth place before going off the track and getting his bike temporarily hung up on an infield structure. McElrath crossed the checkers for this seventh career win and the early points lead in the Eastern Regional 250SX Class title chase. 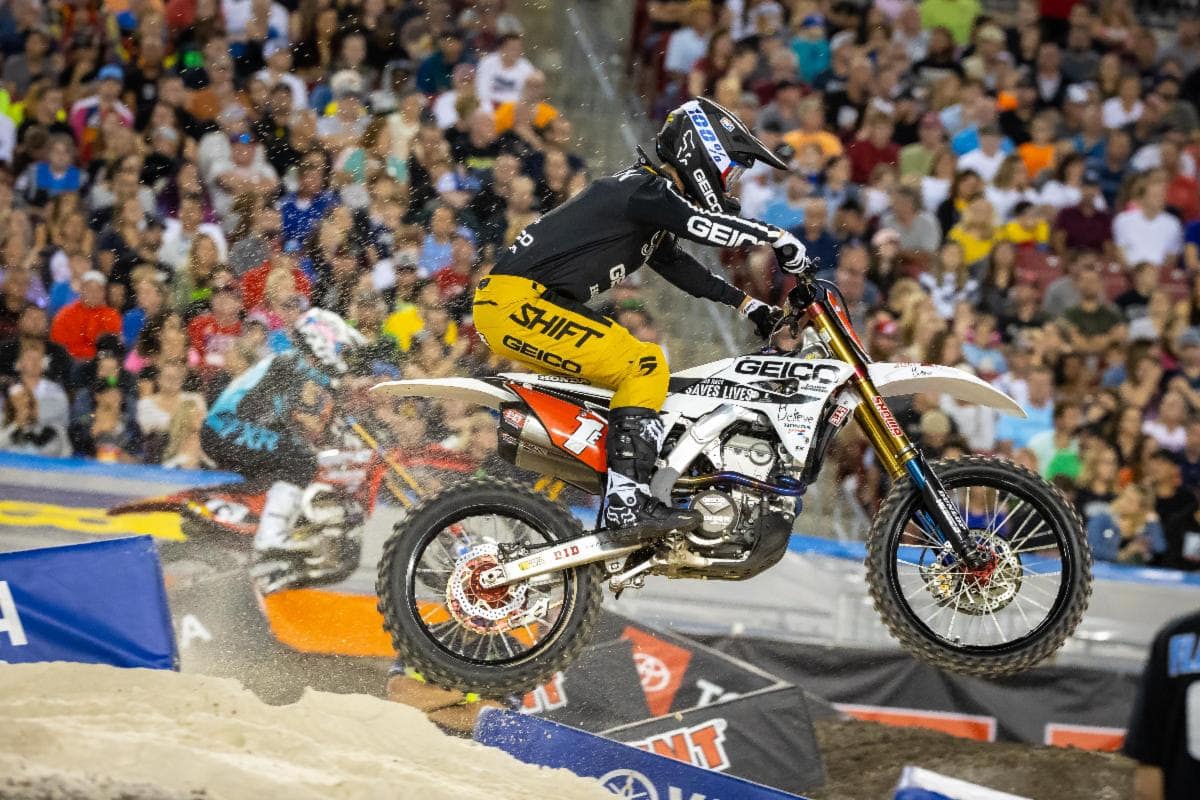 Chase Sexton had to climb through the pack as he started his title defense. He ended strong with a second place finish and 23 points towards the championship. Photo Credit: Feld Entertainment, Inc.
After the race McElrath summed up the tough road to get himself into position to do well this season, “I just gotta start off saying the Lord’s been faithful through it all. Nobody outside of my wife and I really know what went into this year and what a hit we took last year. Just mentally, man it was a struggle. Everybody goes through their down times and I really had a lot of growing to do last year. And man, I’m just, we’ve had to grow up, that’s really been it. We were being childish and man, it’s nice to be here. This Monster Energy Star Racing Yamaha team, they’ve given me their best and I just can’t thank them enough, my wife, my mechanic Matt, Dr. G… Such a relief I mean, coming into this race I was living on a prayer, really. Leading up to this season we changed everything and I’m like, ‘All right God, you got us here, let’s keep going.’ So I’m good.”

“Coming into this race I was living on a prayer, really.”- McElrath

Sexton was asked after the race if he thought a better start would have resulted in a win, “You can always say that after the race is over, but I really feel like my speed’s good and I feel like I could have been up there with him, just didn’t execute my start like I needed to. Can’t come from fifth and expect to catch him at the end of the race. We’re riding good, the bike’s great, so much better than last year, feeling like a new person. So, coming into this year I’m super confident. It was a good race, won the heat, got second in the main, so just going to keep building. Better than last year, so we’ll just keep building and try to click off some wins.”
Jeremy Martin, who posted the fastest time in practice for the 250SX Class, was asked to expand on an earlier comment that he wanted more out of the night. “When you qualify the fastest, obviously it’s just practice, but it was looking really promising. I’m really proud to be here, third is a really big deal when you consider where I’m coming from. Last year at this time I was just beginning working at a dealership and trying to learn the ropes and live a normal life. And now I’m here back on the big stage, and I couldn’t be here without Factory Connection Racing GEICO Honda. I mean, my contract was up last year, and, not gonna lie I was sweating bullets. I didn’t know if they would re-sign me or not but thank God I had some success before and they were willing to take a risk on me, and here I am and yeah, really, really happy with tonight and we’ll just try to keep building.” 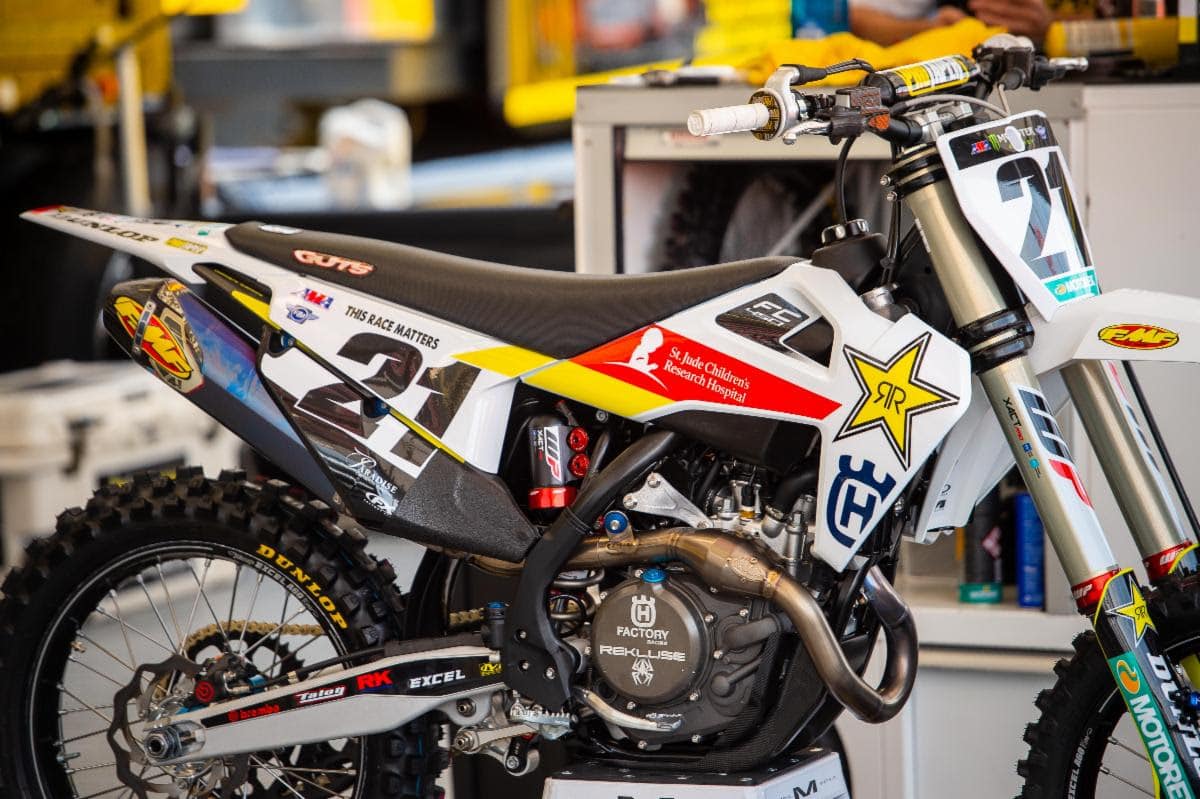 The partnership with St. Jude Children’s Research Hospital was on display throughout the paddock and on the racetrack as teams and athletes supported the mission of Finding Cures, Saving Children. Photo Credit: Feld Entertainment, Inc.

The Florida race not only kicked off the Eastern Regional 250SX Class Championship but was also the “This Race Saves Lives” event in which teams featured St. Jude patient-inspired artwork on their bikes and gear. The custom graphics and one-of-a-kind gear was collected after the race and will become available in the coming days where fans can bid on items from their favorite teams and riders. The online auction went live during the opening segment of Race Day Live and the first item up for bid was Ricky Carmichael’s custom-built Suzuki Boulevard M109R B.O.S.S. Fans can bid on Ricky’s bike and other items by visiting: stjude.org/supercrossauction through the final round in Salt Lake City, Utah on May 2. 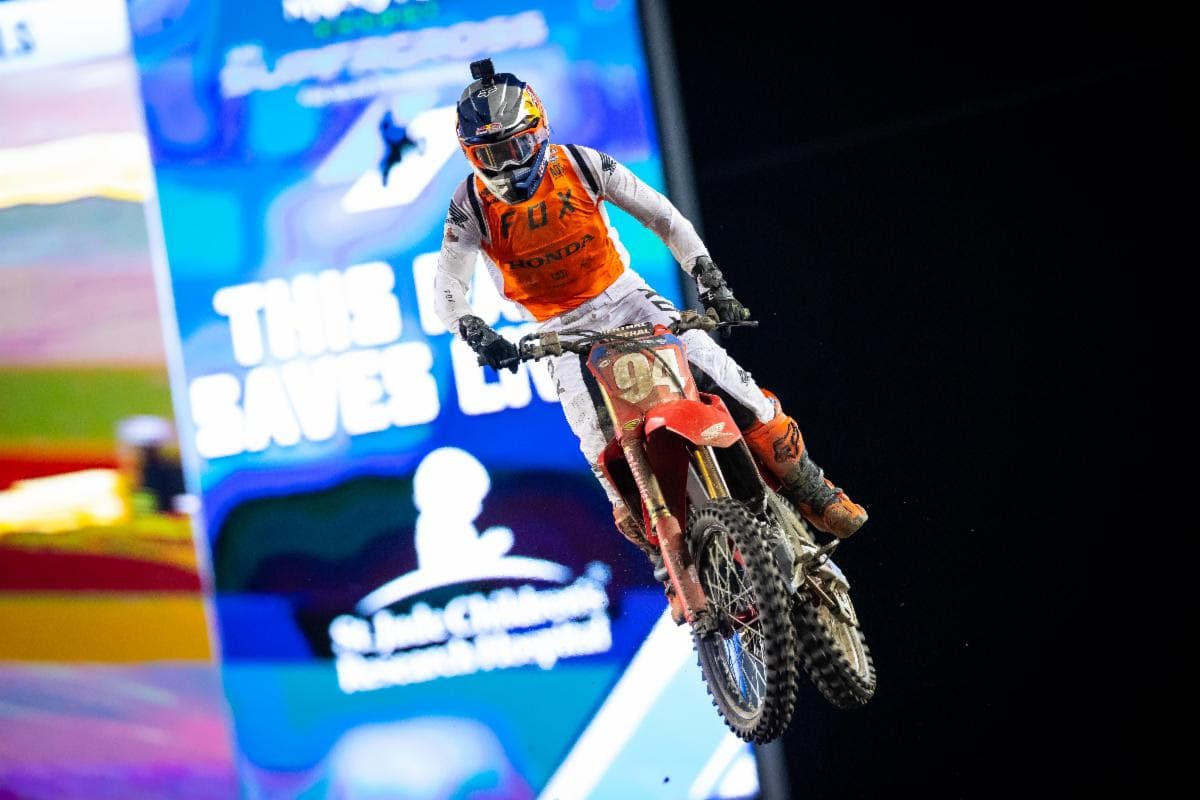 The Tampa race was themed “This Race Saves Lives” which kicked off an online auction that will run through the remainder of the season. Fans can bid on one-of-a-kind race worn items from their favorite riders.
Photo Credit: Feld Entertainment, Inc.

With eleven points now separating three riders in the 450SX Class, the series heads to Arlington, Texas this weekend, February 22, where AT&T Stadium will host the second Triple Crown event of the year in which riders compete in three 10-Lap Main Events. 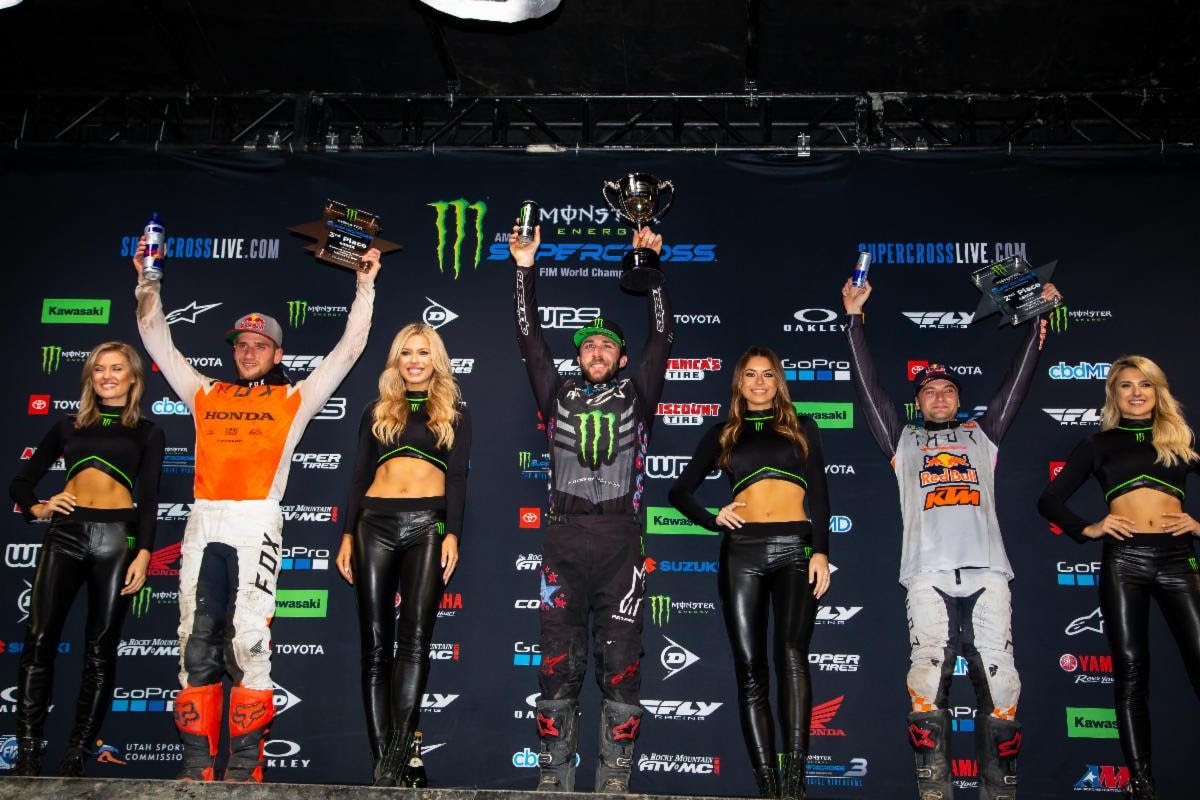 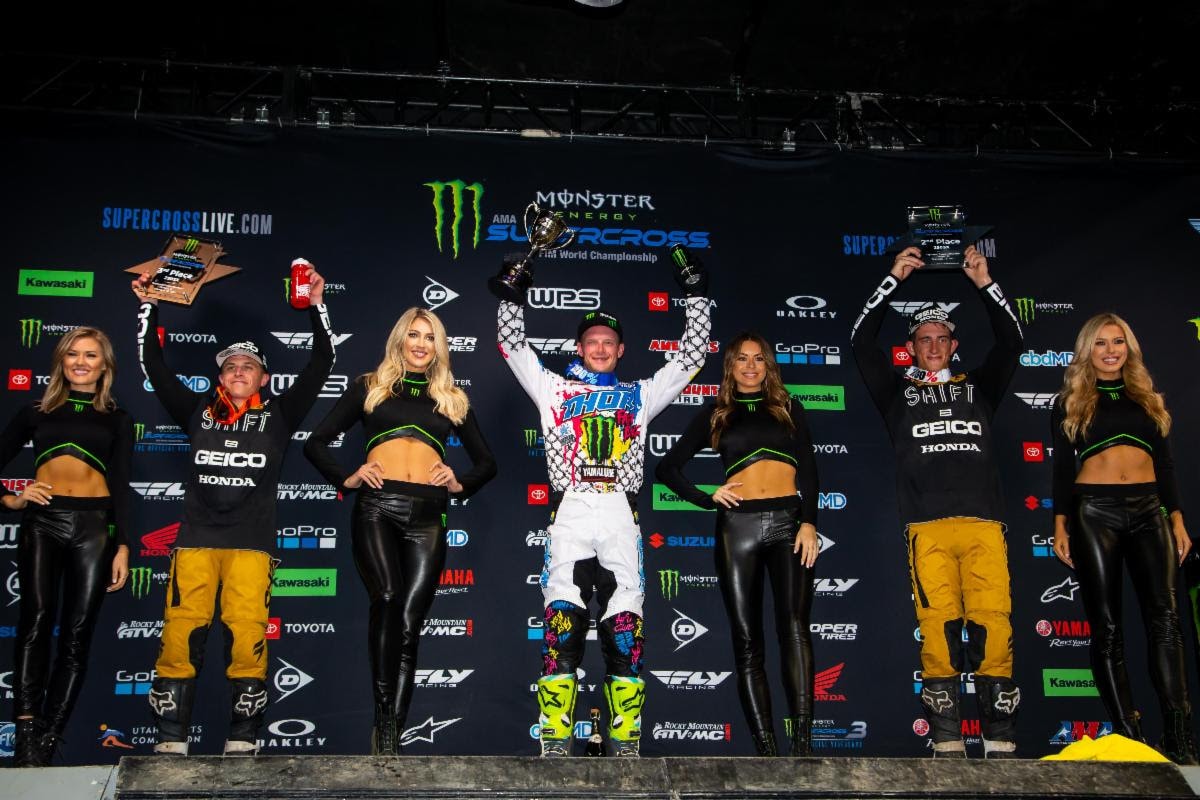 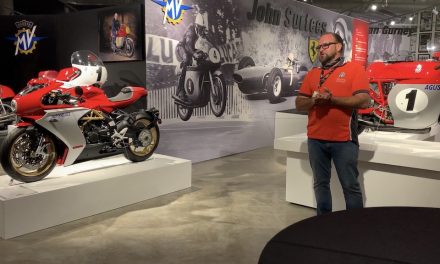 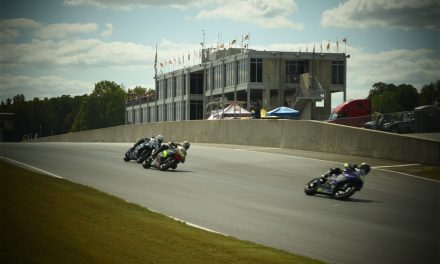 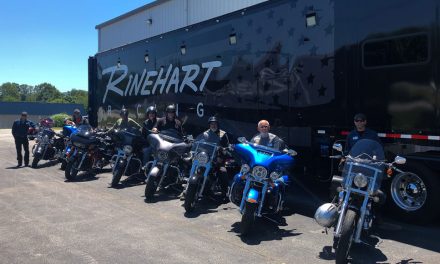 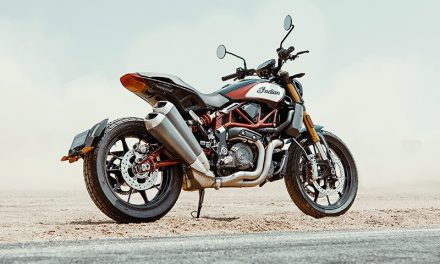