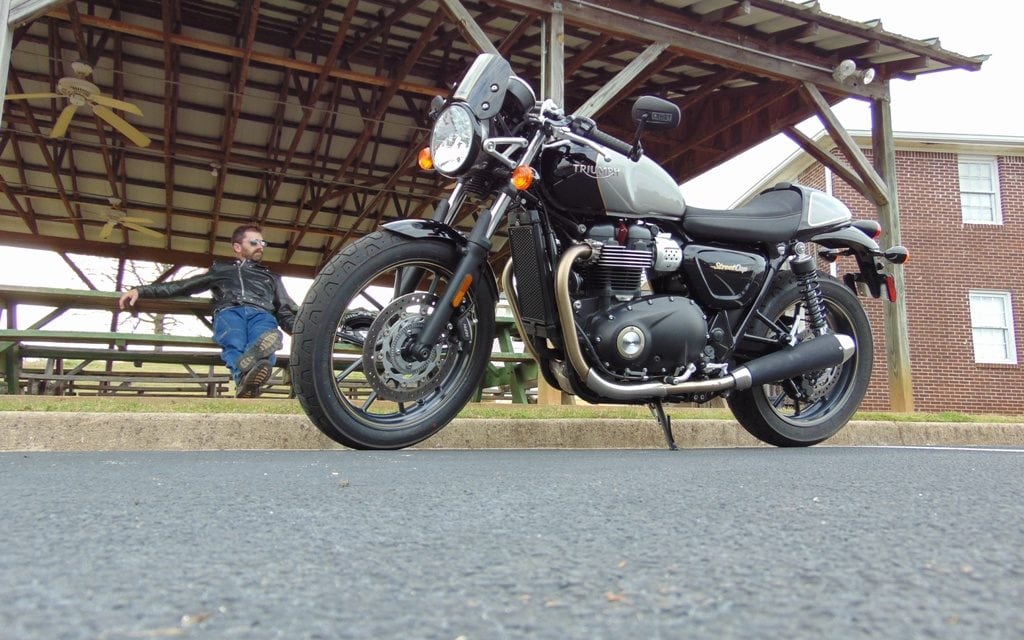 I must confess a measure of bias, upfront. Triumph motorcycles hold a special place in my heart. Always have, probably always will. My father rode a Tiger 500 back in the 1950s. The first street bike I ever threw a leg over as a teen was his 1968 TR6, then learned to ride his ’72 Bonneville. I’ve owned a 1999 Sprint ST and a 2002 Trophy in recent years. Hence, I’m not entirely objective here.

There, I have made confession. I will do no penance.

So when opportunity knocked, offering a long weekend with a Bonneville Street Cup, I enthusiastically welcomed the chance to dance. The good folks at Triumph North America signed me out one from their demo fleet, to ride, live with, and then report on. I was more than happy to oblige. I picked up the Cup on a Friday morning from Triumph North America HQ, south of Atlanta, Georgia, with the simple instructions: “Have fun with it, and we’ll see you back here next Tuesday.” Oh. Yeah. 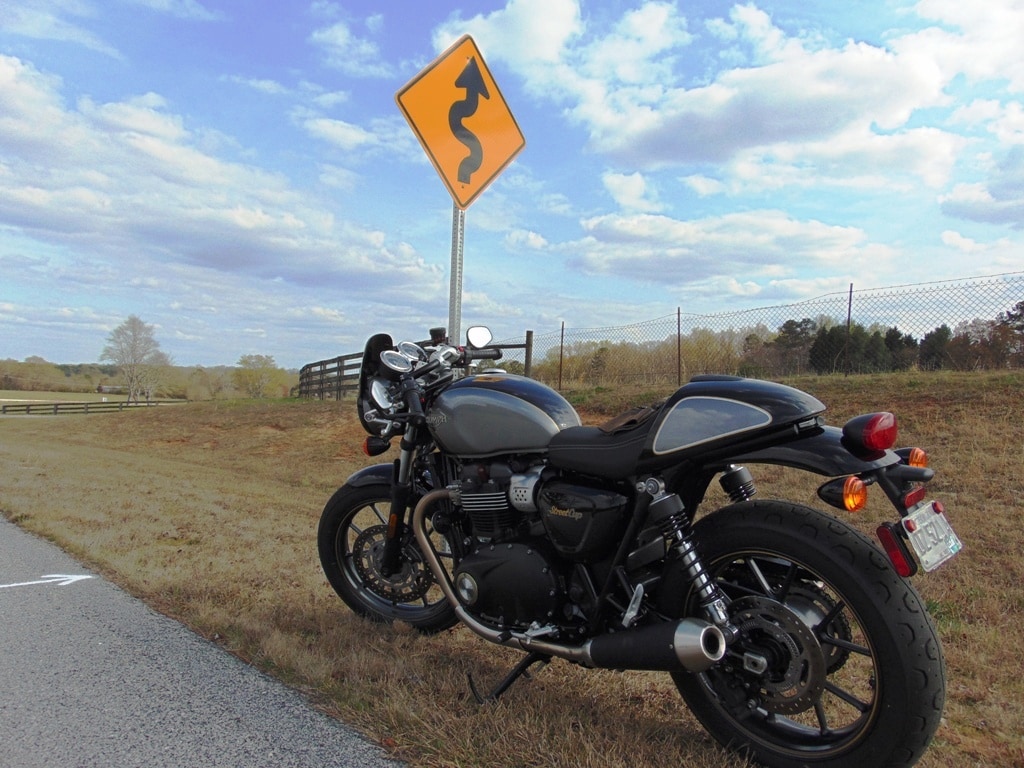 Forecasters were calling for thundershowers periodically across the weekend, so I figured I’d have ample opportunity to test all the modern amenities built into this classic-looking machine (EFI, TC, ABS, etc.). Turned out, we got zero precip all weekend. It’s often said here, “If you don’t like the forecast, give it about 6 hours, it’ll change.” Definitely true.

Based on the award-winning Street Twin platform, part of the completely redesigned Bonneville line, the Street Cup is currently one of four 900cc Bonneys the brand offers, the other two being the revised T100 and high-piped Scrambler. Two engine configurations propel the “modern classics”- the 900cc, and a 1200cc found in the T120, Speedmaster, Thruxton, Scrambler 1200, Bobber, and the all-new Speed Twin. 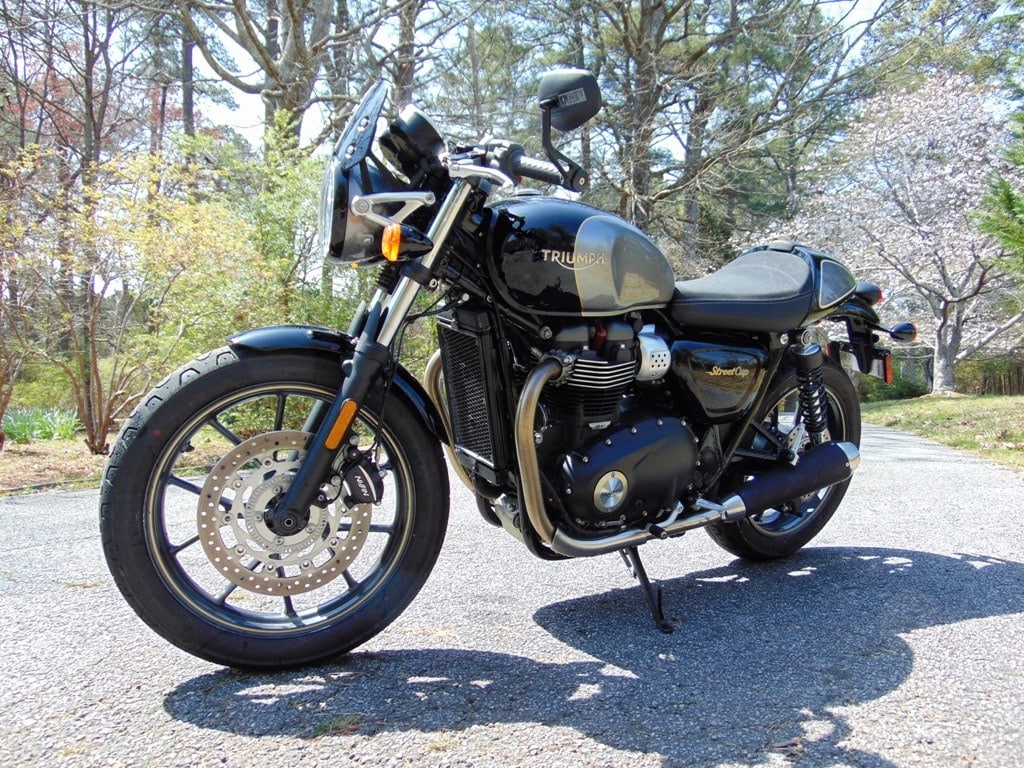 Approaching the Street Cup, the evidence is clear what the designers were aiming for. This model recalls the era of the 50s to early 60s, when British “Rockers” hung out at the fabled Ace Café and similar establishments of the time, stripping down their bikes and kitting them out for racing the city streets and countryside in and around London. From the short race-style tail section, to the low clubman bars and small fly screen, the bike exudes English motorbike nostalgia. A walk-around reminds me of the previous generation Thruxton, which the Cup definitely resembles.

The dual-clock displays feature a left analog mph and a right tach, with digital readouts for everything else. The Cup includes a real-time “miles to E” in the right can, as a number and bar graph, which didn’t always seem to match each other. The left displays can be toggled through with time, two trip meters, and an average mpg.

Turning the key and thumbing the starter, there is a brief delay as the fuel pump primes the EFI, another nice modern feature. The two “silencers” transmit a throaty twin rumble. Clutch engagement is solid, even slightly clunky- which in fact, I like. Feels as a classic Triumph should. Acclimating myself to the Street Cup was effortless, with its light weight, low seat height, and good low speed manners inspiring quick confidence. I’m about 5’8″, 155 wet weight, and this bike fits me perfectly. I felt very comfortable on it, very quickly. The clubman-style bars pull the rider forward into a somewhat aggressive riding posture, yet the foot peg placement remains the same as the Twin, which I appreciate. Sporty, but not sport bike. 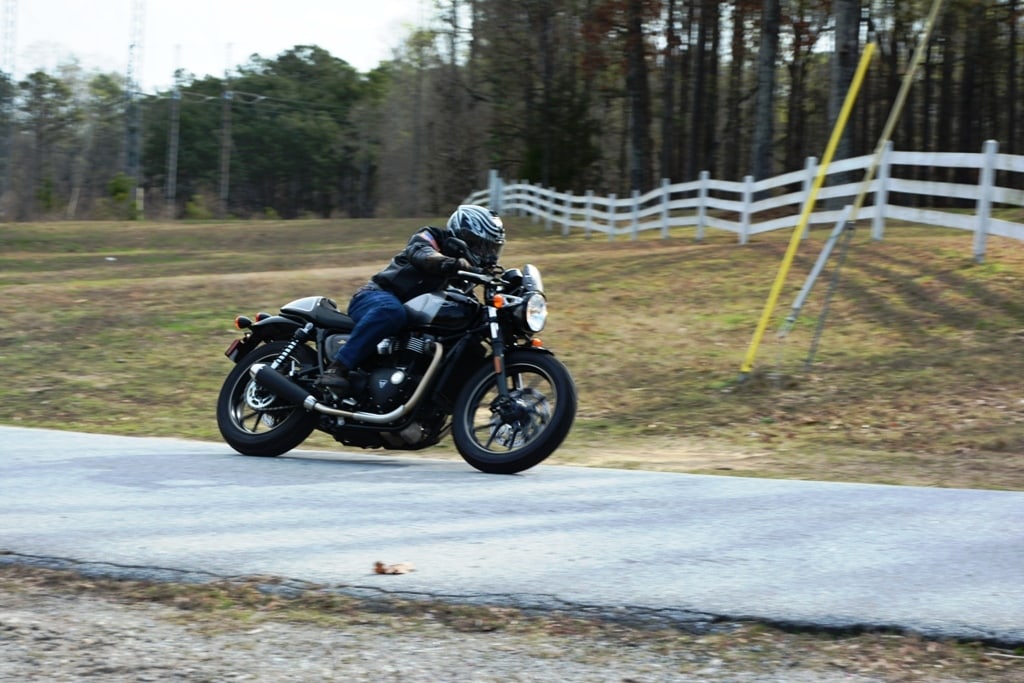 Cracking the highways, the Street Cup throttle-by-wire accelerates hard when wrung. I didn’t try to “float the front”, but certainly enjoyed the arm stretching roll-on power as I merged with traffic. The Cup redlines at 7000 rpm, peaking at 9000. Running up through the gears out on the interstate, the low rumble begins to roar about 4500, growing louder and richer as one climbs through the powerband. What an exhilarating exhaust note! The Street Cup is more than capable of navigating the at-times heavy, other times fast-flowing Atlanta traffic. I always had plenty of power in reserve, on demand for lane changes and passing.

The mirrors are classic bar-end types, which always look cool, yet often are worthless. Not the case with the Street Cup. These mirrors actually perform as well as they look. I always had a good field of view behind me, and out to my sides, until my peripherals took over. Well-done, design team.

I made use of the available anti-lock braking system on a couple of occasions, back near my hometown. Once, a driver cut me off in a lane as we approached a red light, yet crunching down on the two-piston, single disc (front and rear) binders produced a solid, steady, controlled stop, with no wheel lock or skid. ABS worked like a charm. To the careless cager- Thanks for aiding in my evaluation, whoever you are. 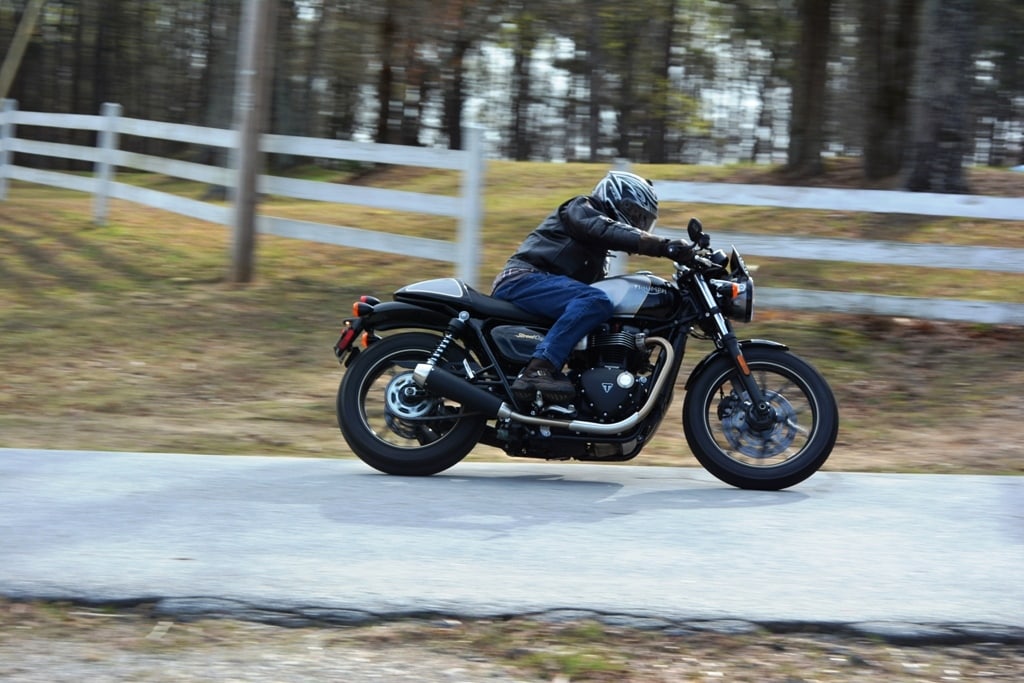 If you read enough moto-journalism, you’ve seen phrases like “steering is neutral” and “linear power delivery”, et al. Journalistic jargon. Simply, the Street Cup’s handling is light, easy to lean and turn, and rolling up through each gear, the 5-speed gearbox is well-sorted, supplying plenty of power in each cog with no discernible flat spots. Honestly, I never really missed a 6th. A gear position indicator is shown in the left display, which I found helpful. I should also add that, though it doesn’t often garner attention among moto-journos, this bike engine-brakes superbly. Just rolling off throttle, the engine scrubs off speed admirably, as you downshift through the gearbox.

The spec sheets claim the Cup makes 54 hp with 59 foot-pounds of torque at just over 3200 rpm. Sounds anemic, until ridden. I dubbed it “Thruxton light”, as the Cup gives the thrills of old fashioned speed, acceleration and nimble handling, without the jump in size, price, and head-snapping power of the Thruxton. I’ve ridden both, and I honestly prefer the Cup. Maybe it’s just my age and inseam… 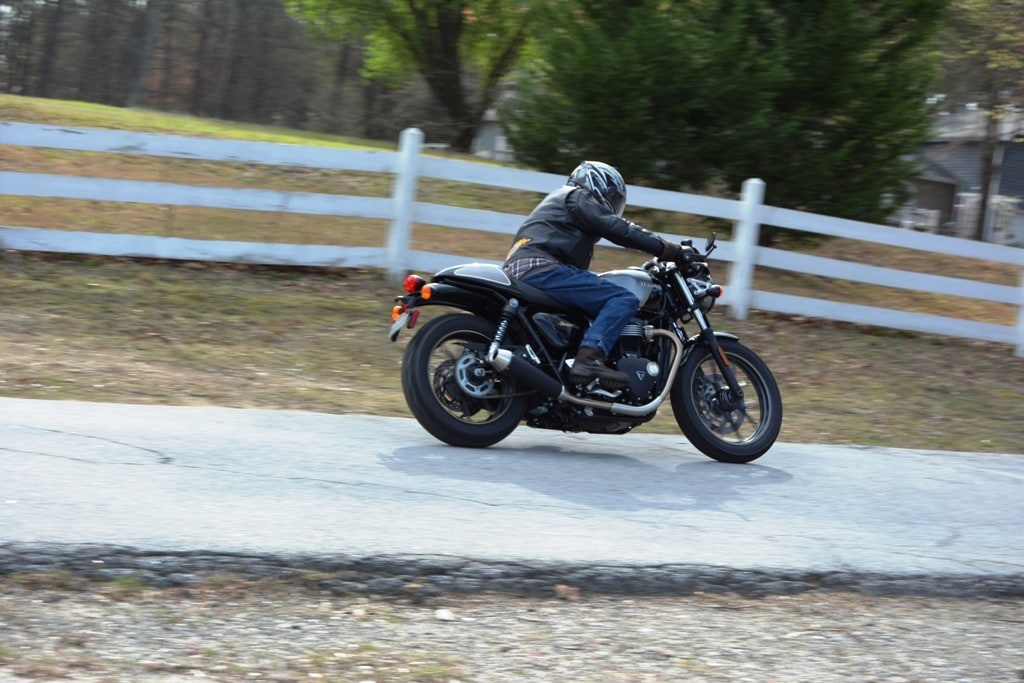 The traction control can be switched off, but I found no reason to do so. The headlight high/low switch is located on the outside of the left grip, where the old “pass flasher” was on my Sprint. Good placement. Speaking of placement, most stock seats get uncomfortable under my admittedly scrawny posterior, after an hour or more of riding. The Street Cup’s seat is both vintage looking, and still fairly comfortable. My sparsely padded hindquarters lasted much longer on this seat than many stockers I’ve spent time on. A passenger is not really recommended, however, due to the minimalist pillion under the rear cowling. The 3.2 gallon fuel tank provides approximately 60+ mpg, 190+ mile range, depending on how the bike is ridden. 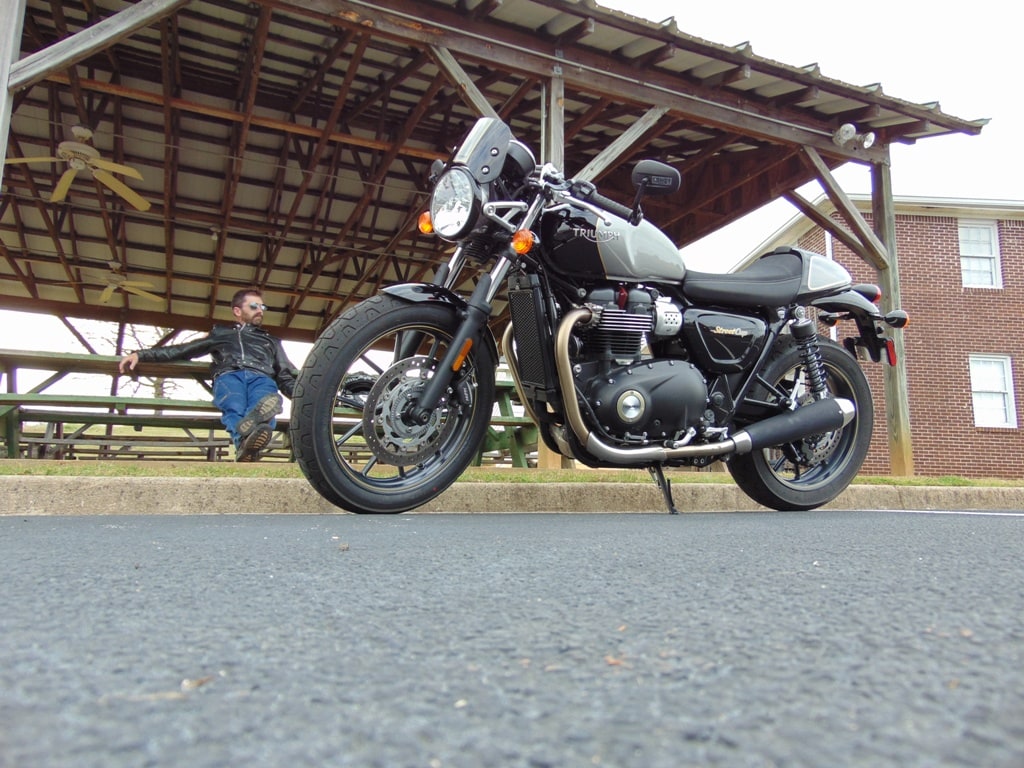 I spent a great deal of seat time on the Street Cup across our weekend together, logging about 100 miles a day with it. A friend of mine once observed, “Sometimes a short test ride doesn’t tell you enough about a bike. You need to wake up with it, ride it several days, to really get a true feel for it.” I’m certainly grateful Triumph afforded me that opportunity with the Cup. I rode it across multiple scenarios, from Atlanta interstate to the curvy country roads around my home in northeast Georgia, from stop-n-go city surface streets to long, fast highways. I only lacked the precipitation conditions, to truly test the traction control.

In all, I found the Street Cup a pure delight to ride. Everywhere I stopped, the bike garnered stares, smiles, comments and questions. Most often, it was mistaken for an old vintage. Several senior chaps waxed eloquent, recalling the old Triumphs from their hooligan youth. It’s nice that the bike evokes such emotion- nostalgia in the old timers, and longing in the young. 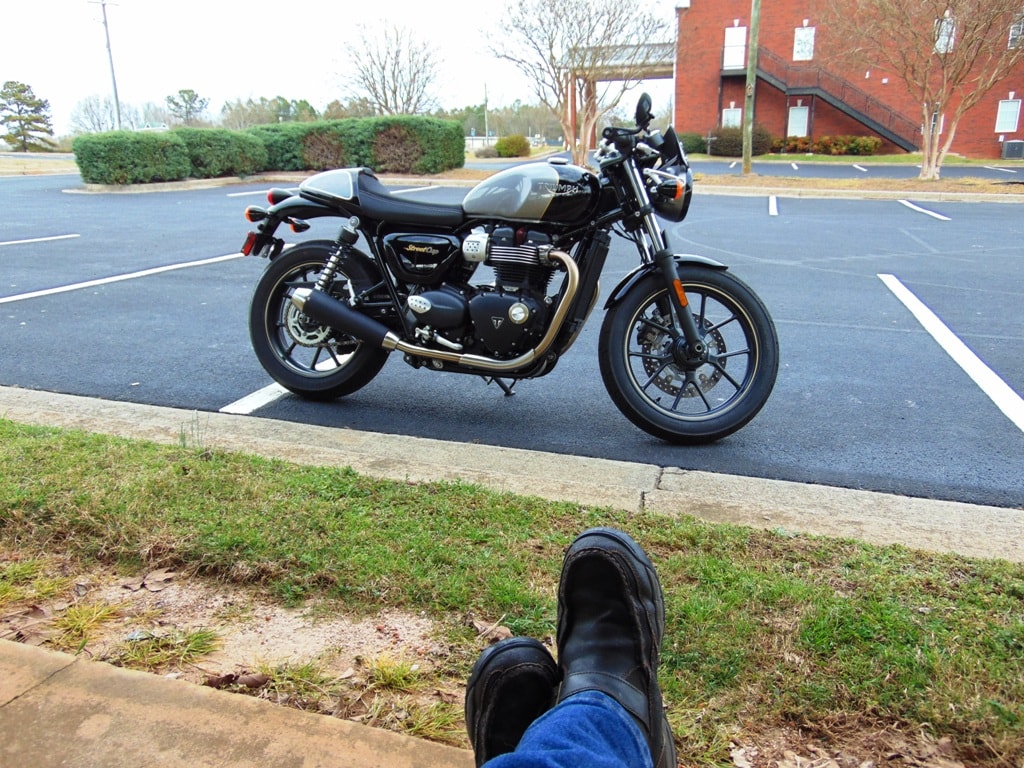 A few observations are worth noting, however. Due to the short fly screen, I found wind buffet to be an issue above 75 mph. It’s not severe, but can be tiring over longer hauls. Also, the clubman bars got a little uncomfortable for me on lengthy road stints, probably due as much to my age and neck surgeries as anything. Finally, my knees often hugged the cylinder fins rather than the tank, like I’m used to on my Sprint. Yet these caveats did not detract from the sheer pleasure this bike was to ride. I definitely added to my smile wrinkles after a 4-day weekend aboard the Cup. 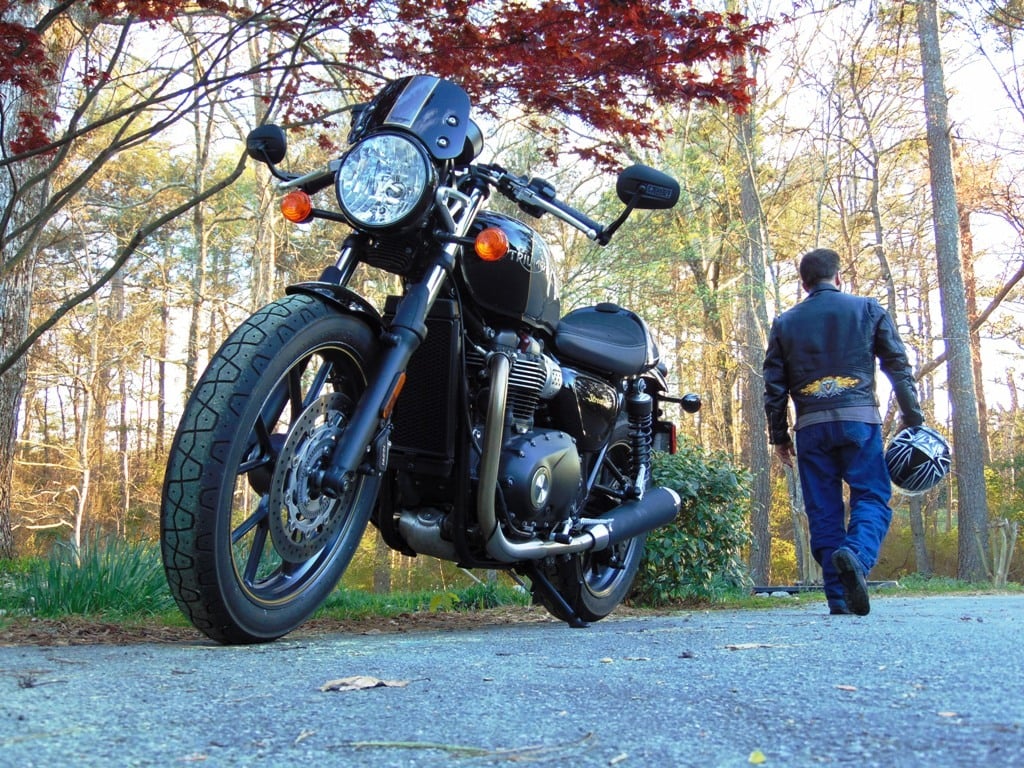 If you, like me, enjoy the quick, nimble handling of a sport bike, but appreciate the more comfortable riding position of a standard, and you also love the look and feel of the old classics, I say look no further than the Triumph Street Cup. It’s a fantastic combination of “sport/classic” if I’ve ever seen one. Triumph has certainly tightened their grip on “moto-cool.”

For the full lineup of Triumph motorcycles, visit triumphmotorcycles.com

*postscript: I first wrote this evaluation for my friends at Born to Ride. I so enjoyed the bike, that I bought my own! With a Street Twin handlebar setup, I must add. 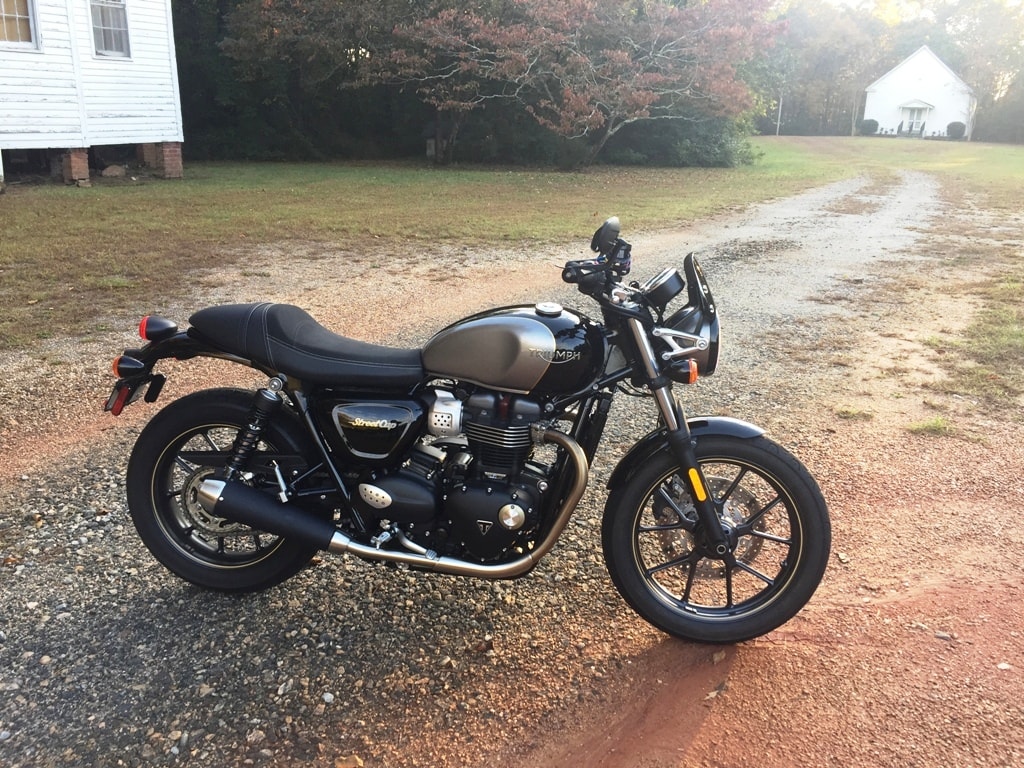 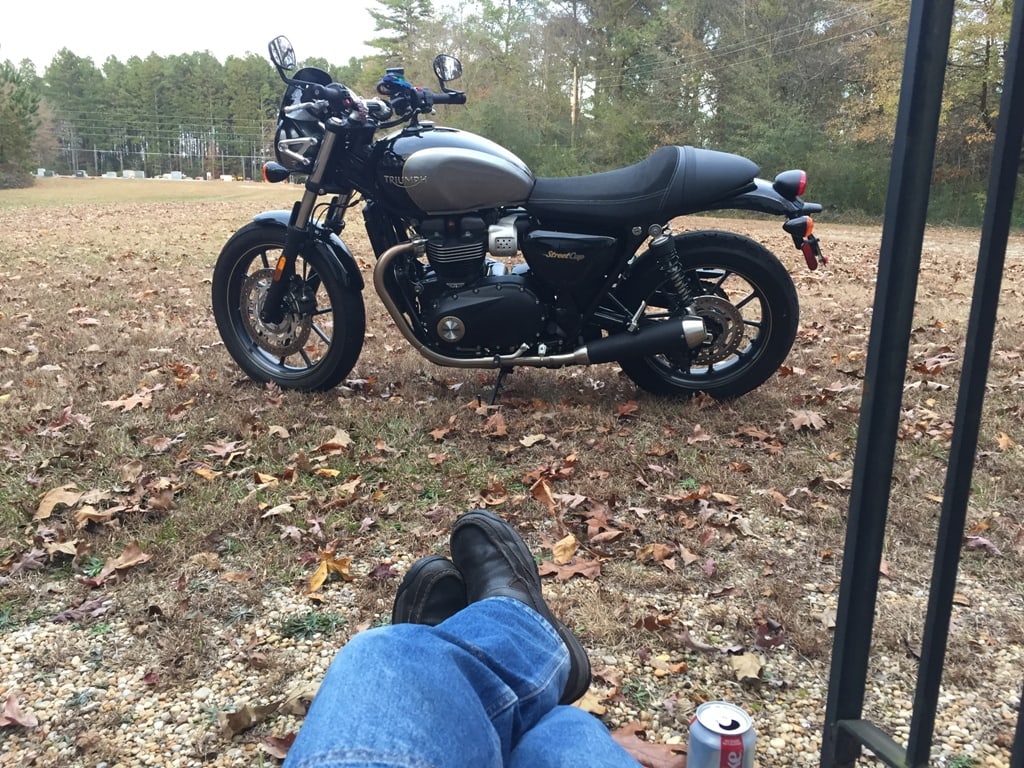 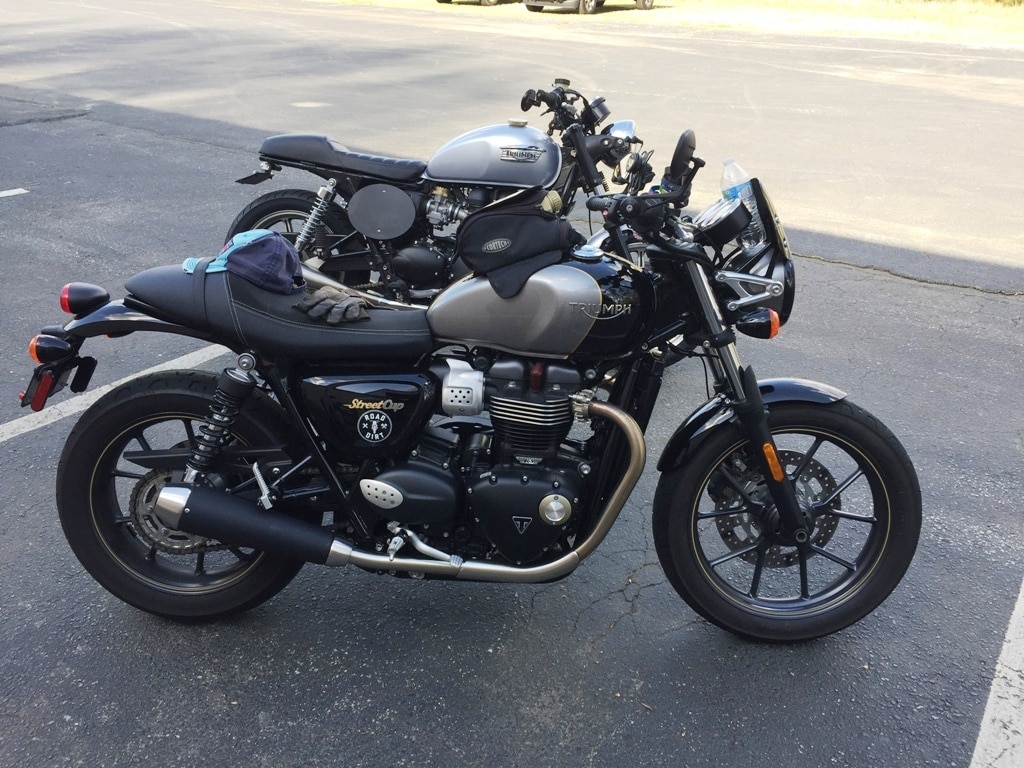 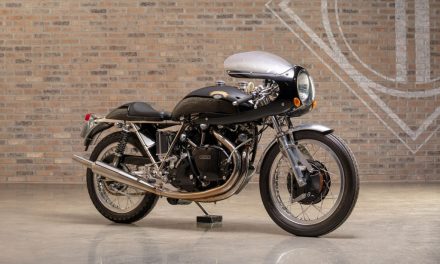 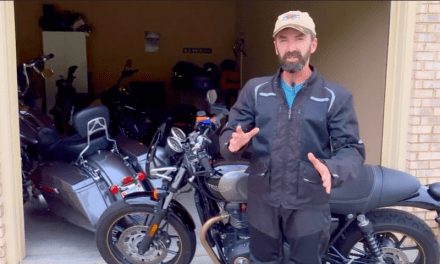 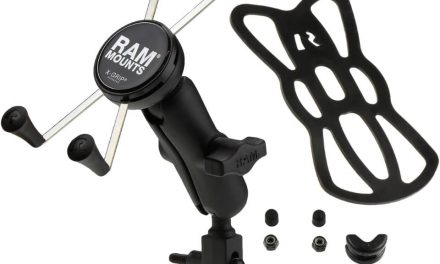 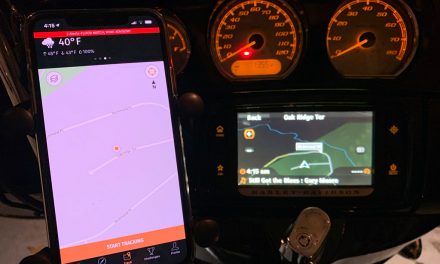 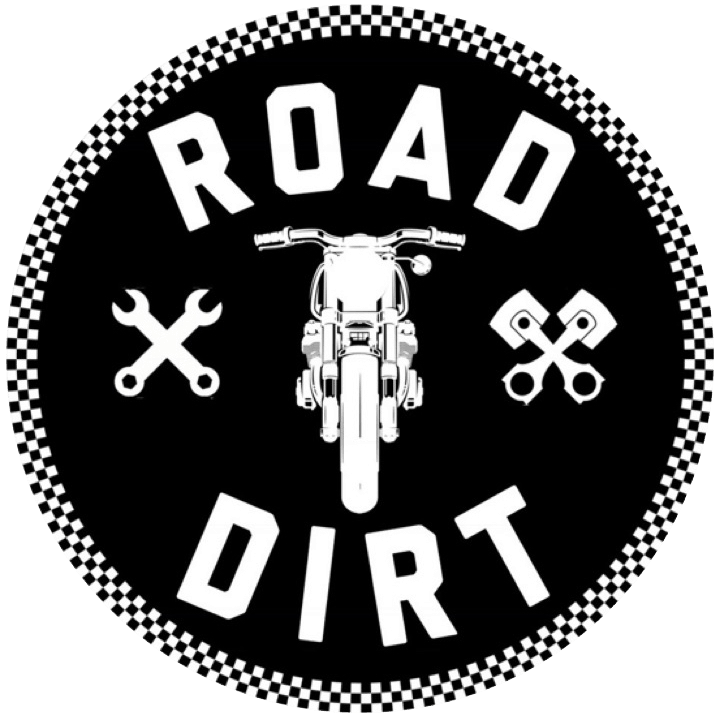 When you subscribe, you'll receive a monthly email with links to articles you may have missed, notifications of upcoming events, and the occasional special offer for subscribers only. Enter your first name and your email address below and click the Subscribe button to get started!